Effective August, she'll bring her considerable storytelling skills to Greenpeace USA as the next executive director — returning to the organization where she began her professional career in the late 1980s.

"I've been thinking a lot about how I can help make the biggest possible changes," Leonard said shortly after she was named as the successor to Phil Radford, who stepped down in April. "Greenpeace is unparalleled in its resources and independence, in the competence and smarts of its staff." 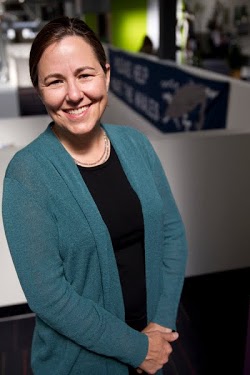 Leonard's "Story of Stuff" video (below) was a viral hit in 2007 for Free Range Studios of Oakland, Calif. It has been viewed more than 40 million times. The most recent video in the series tackles GMO labeling. There are nine videos altogether, reaching a community of more than a half-million people.

Greenpeace USA already does a pretty effective job at highlighting controversial environmental issues in ways that galvanize public attention. But Leonard believes Greenpeace and other organizations can touch far more people by being less "whiny and wonky" and using "familiar and accessible language" to get its message across. Sometimes, the environmental movement can rely too much on data and that can be a turnoff for the layperson, she said.

During our brief telephone conversation, Leonard's positive energy crackles cross-country. "Let's get up, and with a sense of joy, work together to make it better," she declares.

Certainly, Leonard is excited about the potential to "feed hope" but it would be a mistake to underestimate how far she'll go for a credible cause. During her previous tenure at Greenpeace, she was arrested for protesting a business that was exporting hazardous waste to South Africa during the Apartheid era and dumping it in a black community. Leonard earned a masters degree in city and regional planning from Cornell University, and currently serves on the boards of GAIA and Public Citizen.

While her long-range vision is still forming and she dodged a question about the next five years, Leonard plans to spend much of her first year with Greenpeace forging relationships and partnerships with "other sectors of people who care about the planet" and that share the organization's ideas about economic equity.

While Greenpeace USA's position on turning down corporate, government and political party donations stands, she'll have an open-door policy when it comes to engaging with businesses "that are willing to working on solutions." Asked to name an example, Leonard points to apparel maker Patagonia's rather unorthodox campaign to convince people not to buy things they don't need. "They are really redefining the relationship to consumerism," she said.

She also admires Patagonia's method of communicating progress relative to its evolving sustainable business and supply chain goals through an interactive, visual map called The Footprint Chronicles that is prominent on its website.

More "sincere" businesses should invest in sharing their stories, but Leonard acknowledges that some would rather expend those resources in the field rather than on marketing. Still, "people don’t have to be perfect to tell what they are doing, and learning," she said. "It is so important to get these stories out."

“Annie brings a powerful set of skills and talents to a rapidly changing media and online environment,” said Karen Topakian, Greenpeace's board chair, in a statement. “Her stories explain the broken systems at the root of our environmental crises in simple ways that inspire all of us to work together to create a fairer, more sustainable world. She also brings with her powerful personal experience with direct action, a cornerstone of Greenpeace’s mission and identity.”

Leonard's predecessor Radford became Greenpeace USA's youngest executive director in 2009. One of his more notable accomplishments was convincing Asia Pulp & Paper to focus on deforestation in Southeast Asia. In the video below, Radford speaks at the GreenBiz Forum in February.

Top image of Leonard in the original "Story of Stuff" video

Annie Leonard of Greenpeace on mixing business with politics

'The Story of Stuff' Takes on E-Waste and Toxic Gadgets