Why utilities need to get real about distributed energy

Why utilities need to get real about distributed energy

We’ve all heard a lot lately about the distributed energy threat and how it might hurt utilities.

For example, the Rocky Mountain Institute earlier this year released a report saying that customers soon will begin defecting from their utilities and embracing off-grid solutions that involve solar energy and storage. RMI found that in the southwest (especially California), and in the northeast (especially New York City), these systems could be economic for tens of millions of customers in the next 10 years.

So, given that defection and mutiny seem inevitable, what’s a utility to do?

A new report (PDF) from Ernst & Young, “From Defense to Offense: Distributed Energy and the Challenge of Transformation in the Utilities Sector,” gives utilities some tips, chief of which is: Don’t be so defensive. Utilities need to see the threat as an opportunity that we all can benefit from, says the report. 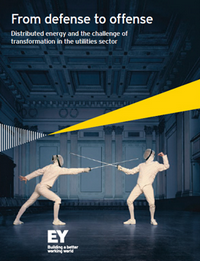 “The report … asserts the power and utility industry must shift from its current defensive posture regarding distributed energy resources and instead go on the offensive and lead the revolution,” says a summary.

Echoing RMI’s finding, the report says that by 2020, rooftop solar PV will become cheaper than power from the grid in most parts of the United States.

“As a result, conventional centralized, dispatchable, fossil- or nuclear-based generation will gradually cede ground to distributed energy resources (DER). In fact, some foresee a future cliff for traditional generation when DER is combined with affordable storage technologies,” says the report’s executive summary.

What’s more, energy efficiency, along with distributed energy, will alter the sector’s value chain, says the report. Instead of an integrated one-way model, the sector will become multidirectional, with consumer-producers acting as generators.

“The threat DER poses to incumbents is severe, and attempting to deny the situation with status quo forecasts or blocking the inevitable outcome by penalizing customers who adopt DER is futile,” says the executive summary. “It’s time for the sector to move over to the offensive by developing DER friendly strategies and business models that focus on creating customer as well as shareholder value.”

The report suggests that utilities commit to transforming how they operate, offering new products and services that compete against new entrants.

In addition, utilities should transform the grid so that it’s more distributed, digital and dynamic, and provides two-way communication between customer locations and the utility, says a report summary.

Along the way, utilities need to manage the transition by seeking full cost recovery of legacy assets to recover investments incurred during the pre-distributed energy era.

And utilities need to “innovate and accelerate,” providing value related to the rise of distributed energy.

The writing is on the wall for utilities. As the report says, it’s time to accept the inevitable and take action that ensures everyone benefits from the distributed energy revolution.

Top image of power lines by swisscan via Flickr

DERs: get or get got