Ten years ago, on a diving trip to Cocos Island with Rob Walton, the chairman of Walmart, we began discussing how his company could affect global conservation efforts. Rob thought it was important for me to speak with Lee Scott, Walmart's then-CEO. A few weeks later we flew to Bentonville, Ark., to begin a conversation that quickly morphed into a decision by Walmart to investigate how it could shift toward more sustainable practices.

Fast forward to last week in Bentonville, where Walmart held its first Sustainable Product Expo. In front of a full auditorium, I watched the CEOs of some of the world's most powerful companies stand on stage and make commitments to green their supply chains — recognizing that what is good for humanity is also good for business.

Our Earth is currently out of balance. The combined impacts of climate shifts, ecosystem collapse and huge population growth require that we take a new approach to development — and as we have begun to see, development that does not take the health of nature into account will fail. It will fail to meet the daily needs of the more than 7 billion of us who depend on it, and it eventually will make business as we know it grind to a halt.

There's no denying the tremendous power that Walmart holds in our global society. It's the largest corporation in the world, with more than 2 million employees and millions of other people who depend on income from products they sell to the company. According to 2012 numbers, if it were a country, it would be the 26th-largest economy in the world.

A decade ago, largely because of the enthusiasm of Scott and other company leaders, Walmart began to examine the positive impact that shrinking its environmental footprint could have on its bottom line. After all, actions such as reducing the amount of packaging and water use reduce waste, and reducing waste brings down costs — not just for the company, but the consumer, too. 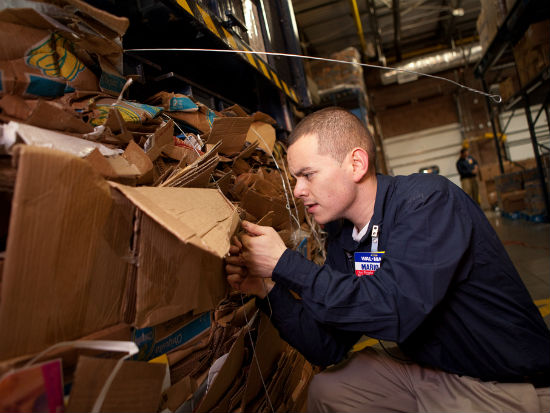 With the help of Conservation International's Center for Environmental Leadership in Business, and the engagement of other organizations, sustainability has become central to Walmart's DNA. The company now works with its 100,000 suppliers on reducing their impacts and ensuring their commitment to the cause.

And here's the good news: When Walmart wants to make a change, other companies have to follow suit. Walmart can convince truck manufacturers to make their vehicles more energy-efficient. It can affect the way General Electric makes light bulbs. It can control where fish are sourced from. Given the millions of items carried by its thousands of stores, possibilities virtually are endless for the company to create extraordinary impact.

A ripple effect from Bentonville

I attended last week's meeting in Bentonville with WWF President Carter Roberts and Environmental Defense Fund President Fred Krupp, together with Jib Ellison, who was with me when I first met with Scott in 2004 and has been very involved in the conversations since.

We watched as Walmart CEO Douglas McMillon signed specific commitments for sustainability with the leaders of Coca-Cola, PepsiCo, Monsanto, Procter & Gamble, General Mills, Kellogg and Cargill, among others. All of these people voiced their deep commitment to sustainability in front of 2,000 people representing many of Walmart's largest suppliers.

What gives me hope is that we are making progress. In the past, NGOs had to fight to engage corporations in environmental discussions. Today, industries recognize that recycling and saving ecosystems is in our collective self-interest. We are making enormous progress.

I believe that Doug McMillon has a deep, personal commitment to sustainability. He wants this to be his legacy, and the legacy of Walmart: that the company will be able not just to participate in sustainability, but to use its power and influence to lead other companies.

This is not a CSR commitment. It's not a PR stunt. It's what people like McMillon and Scott and Walton believe in. Of course, no one knows the exact path Walmart will take, but at least it has promised to make the journey.

I'm really proud of CI's role in helping Walmart get to where it is today, and I look forward to continuing this journey with its leaders. And I hope other companies rise to the challenge. All of us have a role to play in creating the next generation of sustainability.

How Walmart Became a Force for Nature

Walmart sustainability at 10: The birth of a notion

Behind the scenes at the Sustainable Apparel Coalition