Parked outside an automotive and industrial design event held last week in San Francisco, a flaming red 2015 F-150 — which is set to hit the market later this year — looks somewhat out of place in The City, as if it is just stopping through on its way to a big construction job in the Central Valley.

Inside the event, nestled into a corner next to a stage featuring a panel discussion that includes Ford’s director of strategic design, Freeman Thomas, the baby-blue solar-electric concept car looks much more at home.

After all, San Francisco has among the most electric vehicles of any city in the U.S., along with a growing EV charging infrastructure.

But according to Thomas, both vehicles perfectly embody Ford’s vision for sustainable automotive design.

“Efficient, lightweight, aerodynamic, all of that,” said Thomas during the panel discussion. “As different as those two vehicles are, they have very much the same goal in mind — to be the best of their class.”

While people may not think sustainability when they see the new F-150, Thomas explains that Ford improved the aerodynamics and eliminated 700 pounds of weight compared to the 2014 F-150 by making the new body out of military-grade aluminum.

“That is a huge deal,” said Thomas.

Ford has been advancing alternative lightweight vehicle materials for several years and the new, lighter F-150 is an outgrowth of those efforts, he added. The carmaker has not yet said how this will impact the truck’s fuel efficiency, however.

While the 2015 F-150 is planned for commercial launch later this year, it’s not yet clear when, or even if, commercial sales will commence for the C-Max Solar Energi concept car, introduced in January and based on the existing C-Max Energi plug-in hybrid. 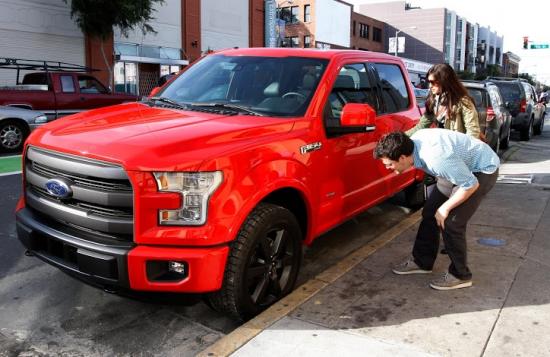 “There are no imminent plans to commercialize it but we are definitely working toward that point,” Dave McCreadie, Ford’s manager of electric vehicle infrastructure and smart grid, told GreenBiz at the event. “Fingers crossed that someday you will see a Ford vehicle with solar panels on the roof."

This summer, together with researchers at the Georgia Institute of Technology, Ford will conduct testing of the concept car’s unique features. Foremost among these will be to see how well the SunPower solar cells embedded into the roof work together with a canopy designed to concentrate sunlight onto the cells and the car’s powertrain battery.

While Ford is not the first automaker to place photovoltaic (PV) cells into the roof of a car, it may be the first to try to recharge the powertrain battery with solar. Generally, PV cells integrated into a car rooftop can generate only enough power for electronics and cooling fans.

By using SunPower’s unique high-efficiency cells, originally developed to operated with sunlight-concentrating optics, Ford envisions parking the vehicle under a canopy equipped with lenses to boost the sunlight intensity by a factor of about eight — and thus generate enough power to recharge the battery.

“That’s the problem Ford is trying to solve with this concept,” said McCreadie.

His main focus this year, however, is on further developing the charging infrastructure and smart-grid opportunities for Ford’s currently available electric vehicles — which include the C-Max and Fusion plug-in hybrids and the all-electric Ford Focus.

As part of a stealthy collaboration with eight other major automakers — quietly underway for about a year — Ford and its unnamed partners plan to launch a vehicle-to-grid (V2G) pilot demonstration this summer with “a handful of utilities.” The purpose is to test an Internet-based communications architecture designed to allow electricity network operators to communicate with and aggregate demand from electric vehicles connected to the grid.

“These cars can be very significant grid assets, but these assets need to be aggregated somehow in order to bid into demand response and frequency regulation markets. So we are working with other OEMs (original equipment manufacturers) on a standards based framework,” explained McCreadie, adding, “It’s a quite important initiative that all of us are undertaking.”

The collaboration, which may emerge from stealth this summer, has the potential to help address the biggest challenge for electric vehicles, which remains cost.

“If I can bid my vehicle into these grid-management markets, and the utilities are willing to pay me for providing my car as an asset to the grid, that can help,” said McCreadie.

As carmakers, utilities and communications developers work to advance vehicle-to-grid technologies for long-term opportunities, he has several predictions for the next couple of years.

Among them, he sees the charging infrastructure continuing to develop, with more rapid-charging, direct-current technology. At the same time, McCreadie says near-term improvements in batteries will enable electric vehicles to have longer ranges and moderate the need for “charging stations on every corner.”

And what does Ford’s manager of EV infrastructure and smart-grid drive? An electric vehicle or an F-150?

However, he often borrows a Ford Focus EV from work.