How HP is closing the loop on cartridge recycling

How HP is closing the loop on cartridge recycling

When HP boss Meg Whitman stated in September that "business as usual is not an option for anyone", it seemed to signal the IT giant's willingness to join the sustainability trend that has dominated the technology sector in recent months. With the likes of Apple, Google and Facebook all winning plaudits for their high profile commitments to decarbonization and greener supply chains, it looked as if the IT hardware veteran was keen to get in on the act.

But Bruno Zago, sustainability manager at HP UK, is keen to emphasize that the company has a long heritage when it comes to environmental leadership. He cited founder David Packard's 1957 declaration that "HP exists to create value for shareholders but also to create value for society," as evidence that the company was a pioneer of green business thinking. And he insists that despite the industry changing beyond all recognition since then, HP remains true to its original goal. "Our customers expect us to be leaders in this arena but also to use technology, software and our people to solve these problems," Zago said.

The latest example of this commitment is HP's cartridge recycling program, Planet Partners, which since its inception in 1991 has taken back and reprocessed 566 million ink and toner cartridges worldwide, extending to over 50 countries and covering 90 percent of cartridges sold. Zago says that thanks to the program, no part of an original HP cartridge is sent to landfill — everything that comes back is fully recycled or goes to thermal recovery.

Most interesting, the company has pioneered a method of recycling the plastic recovered from its cartridges and reintroducing it into the manufacturing process for new cartridges, creating a "closed loop" process.

The company also uses other types of materials in its recycled plastic — 2.5 billion polyethylene terephthalate (PET) bottles have been diverted into the program, while HP has figured out a way of using old clothes hangers to provide a recycled source of polypropylene, reusing almost 500,000 kilograms of plastic.

Shelley Zimmer, environmental marketing manager of printing supplies at HP, admitted that currently the scheme represents a cost to HP, but that the economic argument in favor of closed loop models is likely to become more compelling. "Because of the increasing scarcity of resources and the increasing cost of natural resource extraction, it's increasingly important for companies to source materials from waste," she said. "That helps companies create a hedge against future material prices." 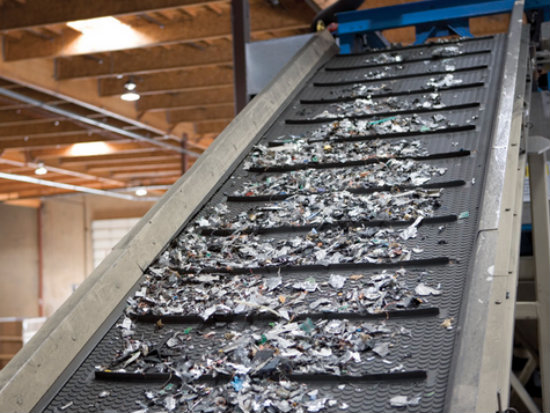 Zimmer also rejected concerns that transporting all this material around the world to various recycling plants and the energy needed to reprocess it could undermine the environmental benefits of the closed loop system. HP is attempting to localize production, she said — the company currently recycles about half of the ink cartridges collected in Latin America in Mexico, while Brazil HP can recycle all of its ink cartridges.

In addition, Zimmer insists simply refilling cartridges reduces quality and efficiency in terms of number of pages printed. An HP lifecycle study conducted earlier this year seems to back her up, suggesting that the move to incorporate more recycled plastic significantly reduces the company's overall environmental impact. "By using recycled plastics instead of new plastics, we're able to reduce the carbon footprint of our plastics by 33 percent," Zimmer explained. "In 2013 alone, we are saving the equivalent of more than 777,000 gallons of petrol by using recycled plastic — the equivalent of taking 1,455 cars off the road for one year. In addition, we're able to reduce our fossil fuel consumption by 54 percent by using recycled rather than new plastic, saving 42,000 barrels of oil in 2013 ... [and] reduce water usage by 75 percent — saving 7 billion gallons in 2013."

Zago said the company is now working on a program likely to be unveiled later this year, designed to make it easier for both businesses and individuals to return cartridges. "It's not as easy as people might imagine to bring a program to life in a particular country," he insisted. "For example, in Italy it's illegal to send waste through the post, so we could never have a cartridge return program there."

Whitman and Packard's words on the value of green business practices are clearly being taken on board — but perhaps the larger problem facing HP is the very future of printing. The company says its customers print about 800 billion pages a year and that despite increasing drives towards digitization, certain legal documents must be printed out, and people still enjoy a physical photo rather than an image on a screen. To that end it has halved the amount of energy its printing products use by 50 percent on average so that its top-end printer costs $1.46 per year to run last year, compared to $56 in 1984. New features such as auto on-off functionality and enabling toner to melt at a lower temperature have helped, while two-sided printing options can cut paper waste in half.

The division is also playing a role in meeting the company's overarching environmental goals, which require it to reduce emissions 20 percent against a 2011 baseline by 2020, after already shedding 20 percent in the six years previously, and ensure that by 2015 at least half of its branded paper will be Forest Stewardship Council certified and/or contain at least 30 percent post-consumer content.

"People are always saying printing is going to go out of fashion — in fact, we see growth in many of the markets," Zimmer says. If this proves to be true, recycling cartridges may well be the environmental and economic win HP is aiming for. But if printing does eventually succumb to the long-promised vision of a "paperless office," HP's green endeavours could still play a crucial role as a proving ground for innovative closed loop business models.

This article originally appeared at BusinessGreen. Top image of HP cartridges by Ruth W via Flickr