With 79 percent of total U.S. electricity output consumed in residential and commercial buildings (PDF), it is a well-established fact that energy and buildings are closely related. This significant consumption has a direct cost for homeowners, corporate owners and tenants. That cost is typically fairly low, depending on the price of energy, the local climate and the energy efficiency of a building, but it adds up to a big sum.

In addition to the cost of energy for consumers and business, cities, states and the federal government also increasingly are concerned about the indirect costs of energy consumption. These include costs related to the carbon emissions from electricity generation and the public cost of maintaining and expanding the electricity grid and generation capacity.

Everyone shares the air in a city

Surely, air quality in U.S. cities is nowhere as bad as in their smog-ridden Chinese counterparts, but the environmental quality of cities is an increasingly important characteristic. And the threat of rolling black-outs means cities and states are concerned about the energy demand of the built environment, trading off the construction of new power plants with reducing peak demand.

To reduce energy consumption from buildings in cities, an appealing policy approach is to rely on the market to do its work. With a few exceptions, including California, this is typically not achieved through increasing prices (think about politically challenging cap-and-trade schemes), but through providing information on the energy efficiency of buildings to private consumers, such as homeowners, and corporate users, such as tenants.

Basic economics teaches us that in a market with perfect information, less efficient buildings will be less appealing to the market, stimulating their owners to improve the efficiency through better management and maybe capital investments in equipment and the quality of the building.

Where Europe has been rolling out its energy performance certificates across the 27 Member States through a directive from Brussels, mandatory disclosure of building energy performance has overtaken the U.S. market city by city. The Institute for Market Transformation tracks and documents mandatory disclosure regulation, and its most recent overview (PDF) shows that nine cities, one county and two states have adopted some form of disclosure regulation.

Given that cities adopting mandatory disclosure laws include five out of the 10 largest commercial real estate markets (Boston, Chicago, New York City, San Francisco and Washington, D.C.), as well as all of California — the most economically important state — this regulation has started to affect the real estate market. And with that, your 401(k) — because Real Estate Investment Trusts, part of most mutual fund investments, represent a large part of the premier market for commercial real estate.

Using information provided by financial data provider SNL Financial, I investigated the 17,761 assets held by 122 US REITs (just equity REITs, not mortgage REITs) as of March 1, representing a total of 3,055,065,376 sq. ft. (3 billion square feet, that is). This map shows the concentration of REIT assets (darker colors indicate more REIT assets per MSA), and the cities, county and states where mandatory disclosure legislation has been introduced. 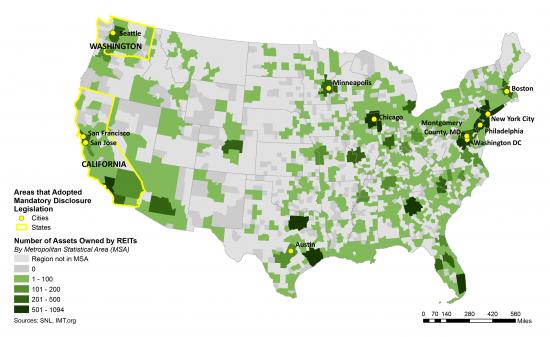 Using the most up-to-date information on mandatory disclosure laws related to building energy performance (PDF), taking into account size thresholds and exceptions for certain property types, it turns out that only 20 REITs are not affected by the disclosure legislation. The other 102 REITs are. For these REITs, on average 17 percent of the portfolio is in areas with recently introduced legislation.

Given that the assets in these areas are typically larger, about 19 percent of the portfolio measured by size (square footage) is affected. Of course, there is significant variation across REITs: Simon Property Group (SPG-N), the largest commercial real estate company in the world, has 13 percent of its portfolio in areas with mandatory disclosure legislation, whereas all assets in the Kilroy Realty Corporation (KRC) portfolio are affected. I created a spreadsheet (PDF) that shows how each REIT is exposed to mandatory disclosure laws.

How REIT affects your retirement fund

Of course, "being affected" by legislation is not a big deal per se. It merely means that as a REIT, you are obliged to report on the (standardized) energy performance of your asset to the local government. In some cities or states, this information should be provided on an annual basis and is then publicly reported, whereas in other cities or states, this information is mandatory at the time of a lease or sales transaction. All 12 jurisdictions use the Environmental Protection Agency's Energy Star program for reporting purposes, providing a score between 1 and 100 for an asset.

This information should be simple and straightforward enough for tenants and investors to understand, and to incorporate it in housing or investment decisions.

The big question is whether the information then will affect rents and prices. Previous research from UC Berkeley and Maastricht University has shown that variation in energy consumption (standardized by occupancy and weather) affects rents and prices. The pricing of energy efficiency by the market should entice landlords to rethink their approach to measuring and managing the energy efficiency of their assets, and to make investments when their assets underperform.

Ultimately, information disclosure and pricing of energy efficiency should make investors rethink the way they incorporate information related to energy efficiency into their real estate investments, whether it's in REITs or in buildings directly. Because the effects may be small, but you wouldn't want your 401(k) to leave money on the table, would you?

How the GRESB/GBCI merger can help shape greener real estate

How can global real estate reporting shape a greener world?