How Tesla and GE envision the future of energy

In the late 19th century War of the Currents — direct versus alternating, that is — Thomas Edison and Nikola Tesla were on opposite sides of energy innovation.

More than a century later, Jeff Immelt, General Electric’s ninth chairman (at left) since Edison himself; and Elon Musk, who pays tribute to the Serbian-American inventor with his electric car company Tesla Motors; were a similar study in contrast at the World Energy Innovation Forum, held this week at Tesla’s factory in Fremont, Calif.

Musk, the hip-yet-humble South African-born chief executive of two exciting young companies, Tesla and Space Exploration Technologies, as well as a co-founder of SolarCity, opened up the star-studded gathering in a morning “fireside chat” with venture investor Ira Ehrenpreis of Technology Partners.

Musk discussed his plan to soon break ground on a $5 billion lithium-ion battery gigafactory — at a still undisclosed location in the U.S. Southwest. With the project on track to start this summer, Musk is envisioning the project as the first of many “gigafactories.”

In the afternoon, Immelt, veteran CEO of one of the oldest and largest energy companies in the world highlighted GE’s contrarian selection of a sodium-nickel-chloride battery technology over lithium ion — also in a “fireside chat” with Ehrenpreis. Finding lithium ion “a crowded space,” Immelt said, “We picked sodium because the base material is sand. We thought we could get to a theoretically lower price point.” 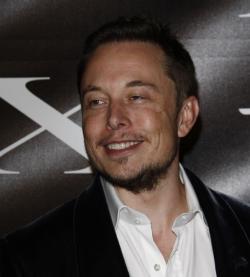 Among the leading battery innovators, GE has invested more than $100 million into its Schenectady, N.Y., battery plant, which opened two years ago. The company sells its Durathon Energy Storage Solutions for renewable power plant firming and time-shifting, grid stabilization, building energy management and other applications.

“Energy storage is one of the holy grails of energy,” said Immelt, a view also shared by Musk — even if, like Edison and Tesla, they have chosen different means in pursuit of that end.

The same goes for their approaches to distributed energy.

While GE also sees “tremendous opportunity” in distributed power, its focus is primarily on fuel cells and natural gas turbines, said Immelt. Unlike Musk’s involvement in SolarCity, GE’s solar investments to date — both in crystalline and thin-film panels — didn’t really pan out, he subtly acknowledged.

“We played wind really well, played gas really well,” said Immelt in reference to two of GE’s leading business units in power generation. He lamented, however, that he “missed SolarCity.” Ever the optimist, he added, “The good news is that we are like 15 minutes into the solar industry” and GE is “trying to figure out where to go next.”

“The advantage I have over most startups is we can put bets in multiple different technologies, and we always have. That’s one of our core philosophies,” said the GE chief executive. “We have always believed in a broad portfolio of technology.”

But a few areas of energy innovation stand out for Immelt.

He’s clearly “excited” by energy efficiency and “low-cost renewables,” such as 4-cent-per-kilowatt-hour wind power and solar for les than 10 cents per kilowatt-hour, while distributed power is “highly investable” and shale gas is “a game changer.” 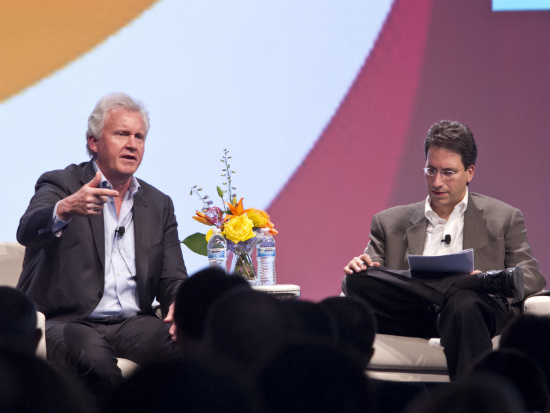 'Don’t think about the "industrial Internet"'

One thing he’s heard enough of is the "industrial Internet,” a term coined by GE, which Ehrenpreis referenced.

“It’s a phrase. Everybody’s got a different phrase,” said Immelt. “Don’t think about the ‘industrial Internet.’ Think about no unplanned downtime.”

By using data analytics, industrial companies such as GE can provide more flexibility, for example, to allow a utility to operate the same gas turbine in different modes, depending on when and how it is needed. Such flexible operations in fossil fuel plants are rising quickly, driven by increasing volumes of intermittent renewable energy on the grid and fluctuating fuel prices.

While an “old company,” GE has been turning to Tesla’s own backyard in search of fresh ideas. The company recently hired around 1,000 new employees from Silicon Valley, pitching to young professionals outside the traditional energy business — people who, like Musk, cut their teeth in software — that they could come to GE, “save the world” and still do what they wanted.

Each in their different ways, that’s just what GE and Tesla are doing. And it the end, like AC and DC power, there’s a need for both.

Tesla and the electric vehicle battery tipping point: Are we there yet?