What NASCAR Nation thinks about 'green'

What NASCAR Nation thinks about 'green'

There’s a reasonable chance that your response to the headline above is to say, “Hmmmm.” Or worse. That’s a natural reaction for many, especially those with a strong environmental ethic, when it comes to putting auto racing and "green" in the same sentence.

But NASCAR, the stock-car racing organization whose massive events make it America’s largest spectator sport, has been on an unlikely journey over the past few years, one with the potential to make an impact across a broad swath of the U.S. populace. The challenge, as so many other companies and organizations have found in influencing mainstream audiences on environmental topics and behaviors, is how to turn good intentions into good, green actions.

I’ve been hearing about NASCAR Green — the official name of the organization’s five-year-old environmental outreach program — for several years. It began in 2011, at a dinner held for members of the GreenBiz Executive Network, GreenBiz Group’s peer-to-peer learning group for sustainability executives. The meeting was hosted at Ingersoll-Rand, just outside of Charlotte, N.C. At each GBEN meeting, we hold a dinner at a restaurant or venue that’s indigenous to the area.

The venue that evening was the LEED-certified garage for NASCAR racer Kyle Busch, a beautiful facility to house his cars and team — a classic southern meal of fried chicken and bisquits. We invited Dr. Michael Lynch, NASCAR's vice president or green innovation, to talk about the greening of NASCAR. There were a lot of skeptical faces when he stepped up to speak.

But not when he finished. Lynch spun a tale of NASCAR’s journey: its commitment to use a percentage of renewable fuel in all race cars; its recycling of automotive fluids and tires at its events; its partnership with sponsors to bolster audience recycling at its venues, and more. (In 2012, the organization issued a “white paper” [download-PDF] on its environmental efforts.)

Joel Makower talks with Tom Carter of Liberty Tire Recycling about what happens to
250,000 or more used racing tires every year.

Lynch also described the research NASCAR has done on the environmental beliefs and attitudes of its massive audience — around 100 million fans who either attend races or watch them on TV. “NASCAR Nation,” as the audience is known, is distributed throughout the United States, according to Lynch, with strong representation in the Pacific Northwest and New England as well as the Deep South. That, he said, provided an opportunity to bring green messages to the mainstream.

NASCAR’s unique position as a green communications channel among was driven home last week, when the organization hosted another meeting of the Executive Network and invited members to stay the weekend to attend one of its seminal events — the NASCAR Sprint All-Star Race, at Charlotte Motor Speedway. About a dozen of us were given unique access to the race, NASCAR executives and partners, the drivers and vehicles, and the environmental operations of an event that attracts more than 100,000 rabid fans.

During our visit, Lynch presented the results of the latest data about NASCAR Nation, an update of that 2011 research. The survey compared environmental knowledge, beliefs and practices of NASCAR fans with those of non-fans. NASCAR fans skew slightly older than the overall U.S. population among those ages 35-64, and are split roughtly 60/40 between males and females.

According to its 2014 study, when compared to non-fans, NASCAR fans are about twice as likely to say their household is “very green” and seeking ways to positively impact the environment. That number has risen since the earlier survey, when NASCAR fans were only 70 percent more likely to consider themselves “very green.” Four out of five fans believe the Earth is going through climate change, and three out of four agree they have a personal responsibility to do something about it. 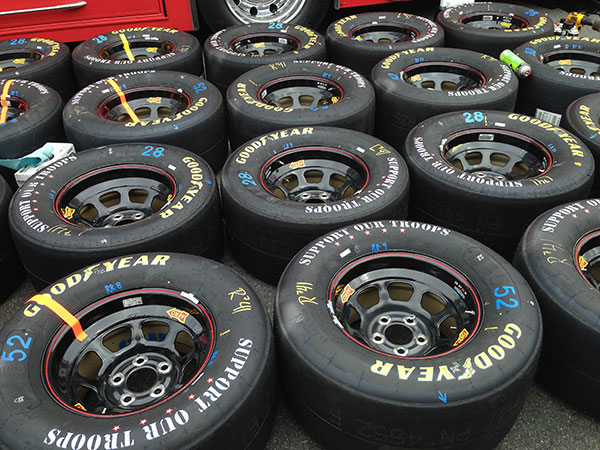 The 2014 study also found that NASCAR fans are also big supporters of renewable fuels, such as ethanol — more than 50 percent more likely to support the use of ethanol blended with gasoline to fuel their own car. Moreover, 80 percent of NASCAR fans recycle, 66 percent have replaced incandescent light bulbs with more efficient ones, 60 percent buy energy-efficient appliances, 40 percent drive or own energy-efficient vehicles and 25 percent use public transportation or ridesharing.

Granted, those numbers seem high — for any cross-section of Americans, NASCAR or not. And without casting aspersions on NASCAR’s research methodology, I’ll be the first to view this data through a skeptical lens. As we’ve seen for years, Americans are prone to overstate their environmental attitudes and practices. And some of the questions make it easy to do so. After all, if you have a recycling bin at work or ever put a beverage container into the appropriate bin in a public place, you have recycled. Does that mean you do it regularly? Not necessarily.

Still, something interesting is going on here, and NASCAR has potential to use its reach and marketing muscle to move behavior and build markets for greener products and services — at least as much clout and credibility as any environmental group or government agency.

As the above stats suggest, biofuels and ethanol seem to fuel much of NASCAR Nation’s green ethic, and that fits nicely with the three pillars of NASCAR Green.

It’s not just biofuels. Fully two-thirds (67 percent) of NASCAR fans support buying solar panels for use at home, though only 11 percent have done so to date, compared with just 4 percent of nonfans. 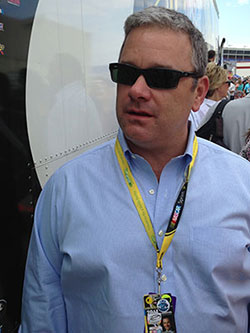 Like biofuels, solar speaks to NASCAR Nation’s high interest in green jobs and energy independence. One likely reason: About 16 percent of NASCAR fans are in construction, building maintenance and contracting trades and industry — a rate about 60 percent higher than the general U.S. public. That equates to some 12 million Americans. For them, solar energy is about jobs, first and foremost.

All of this presents an opportunity for NASCAR to help nurture and support green attitudes, says Lynch, who came to NASCAR from Boston Consulting Group and who holds a PhD in developmental psychology and was formerly a tenured professor at Purdue University.

“We have the opportunity to be arguably the most impactful sustainability platform on a population scale that’s ever existed in this country,” he told me.

For Lynch, that means working with NASCAR sponsors to help bring green products and services to fans. The idea, he says, is to “strategically and very smartly and in a positive way that’s good for the country help folks think their way through product offerings and solutions and technologies that otherwise might be difficult to figure out.” LED lighting, for example, or solar energy or smart appliances. “These product spaces continue to be potentially confusing and mysterious to navigate, in terms of making a purchase.”

“We would love to play a role in helping households adopt more solar,” he told me. “It’s a mix of smart business and doing the right thing by the country and by the environment. And we’ve got this communication channel that we know gets at some of the skepticism that we’ve learned about in focus groups. LED lighting is a great example, where it’s difficult to make the right purchase decision without a lot of effort, yet the products are good products. So, how do you square that off to make it easy for a member of NASCAR Nation to go out and buy a light bulb for their house that they’ll actually like and want to keep and then save money?”

It’s a delicious dilemma. If NASCAR can marry its marketing clout with good, green messages and accelerate consumer uptake of environmental technologies, it stands to be a key player in the green marketplace. And perhaps some of the classic mosaic of corporate logos — found on its cars, drivers’ uniforms and plastered just about everywhere you look at a NASCAR event — might someday represent the makers of electric vehicles, rechargeable batteries, green power and other goods and services of a low-carbon economy.

Ladies and gentlemen, start your ingenuity.

What NASCAR Can Teach Sustainability Professionals

NASCAR and INDYCAR: PR or progress?