Why Steelcase now lets suppliers participate in its REC program

Why Steelcase now lets suppliers participate in its REC program

Using renewable energy credits (RECs) as a strategy to offset the impact of corporate power consumption isn't anything new. Office furniture manufacturer Steelcase, however, may be the first company to formally extend its program to anyone in its supply chain that wants to participate.

Under the groundbreaking initiative inspired by suppliers that asked for it, interested Steelcase partners can purchase credits for the same wind, hydroelectric and other renewable energy projects in which the company already is invested. Suppliers benefit from Steelcase's volume pricing.

"We are working very actively with our supply chain to help them cascade the impacts," said Angela Nakihian, director of Global Environmental Sustainability for Steelcase.

So far, those efforts have included things like helping suppliers with energy audits or water conservation efforts. The idea to help partners buy RECs bubbled up from the field, during regular business conversations, said John DeAngelis, leader of Global Sustainability Initiatives.

"I noticed a trend among suppliers: either they didn’t know much about credits or what they could do with them, or if they did know, they didn't have a partner that they knew about," he said. "And usually cost was also another issue."

Steelcase has contracts in place to purchase RECs equivalent to 100 percent of its global electricity consumption this year. For the United States alone, that's more than 121 million kilowatt-hours (kWhs) from wind facilities that came online in 2011 or later. 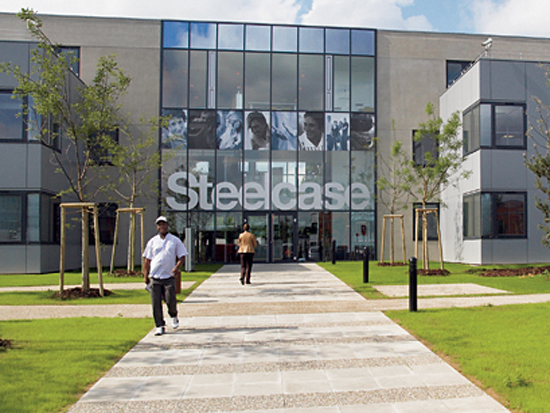 When it started getting inquiries about the RECs, Steelcase approached its administrative partner, Renewable Choice Energy, to figure out the logistics and how difficult it would be to extend its program to suppliers. Once that detail was hammered out, it became talking up the opportunity, especially with midsize partners that had an internal interest in accelerating their sustainability program but that didn't have the leverage to negotiate volume pricing.

While Steelcase doesn't disclose its exact number of supply chain partners, the new program is open to the hundreds of companies it works with directly. The first big push has been through its standard communications channels, including the Supplier Village social media platform shared by the Steelcase ecosystem shares.

"Right now, we're mainly trying to gauge interest," DeAngelis said. "This is not a mandatory thing. This is a benefit that we are providing to suppliers that would like to get involved."

Steelcase supports sustainability conversations as part of its business-as-usual relationships. "We talk about sustainability goals, integrating these requirements into our scorecards and helping them to understand how this might affect them," Nakihian said.

While the company won't talk about its expectations for supplier participation, the dialogue will be used to help inform Steelcase's future clean energy investment decisions.

"We will come come to a shared aspiration," she said, "and make a difference that is bigger than a product."

Can the REC Market Self-Regulate and Remain Credible?