Kansas City, Mo., is aiming to become the next stop for civic-minded entrepreneurs looking to pilot sustainable solutions via a smart city network.

Mayor Sly James announced Wednesday that the city is partnering with Cisco to develop a mobile platform in its downtown corridor that will enable Kansas City to launch a number of pilot projects including sensor-based infrastructure monitoring, smart street lighting and high-definition security video.

The effort, part of Cisco’s Smart+Connected Cities initiative, hopes to improve connectivity and sustainability within municipal borders, as well give residents the opportunity to be more engaged in Kansas City’s well-being using digital kiosks and mobile phone apps.

“It’s a win-win for all,” said James. “It furthers our efforts to enhance the quality of life for residents and visitors.”

James singled out two projects that he’d like to take on as part of the Cisco partnership: integrating sensor data to improve service for Kansas City’s brand-new two-mile streetcar route, and using partnerships with entrepreneurs to test out new solutions to address the problem of pressurized water main breaks.

Cisco and Kansas City are encouraging entrepreneurs to think of their project as a “living lab” incubator to test out new products and ideas targeted towards smart cities. Think Big Partners, a Kansas City business accelerator and coworking space that houses startups and other independent businesses, will be working with the pair to bring in a range of innovators interested in helping the city address ongoing challenges.

Other cities that have worked with Cisco as part of the Smart+Connected Cities program are Hamburg, Germany, which tied traffic data to street light timing as a way to improve vehicle flow throughout the city, and San Antonio, Texas, which installed video kiosks as a way for residents to resolve court-related problems (such as parking tickets or traffic violations) closer to home rather than having to commute and wait in line at the courthouse. The system is also used for police detectives to connect with judges to obtain warrants.

The city of San Mateo, Calif., a suburb south of San Francisco, is collaborating with Cisco and smart parking startup Streetline on a project using cameras in place of sensors as a way to detect a presence of a car on the street or in a garage.

“It’s the first time this industry is expanding beyond magnetic and light sensors to now do camera-based sensing with Cisco [hardware],” Zia Yusuf, Streetline CEO, told an audience Wednesday at the Cisco Live event in San Francisco. “We can put them in the garage, on the street and detect the presence of a car the same way our sensors do — and integrate it into our apps.” 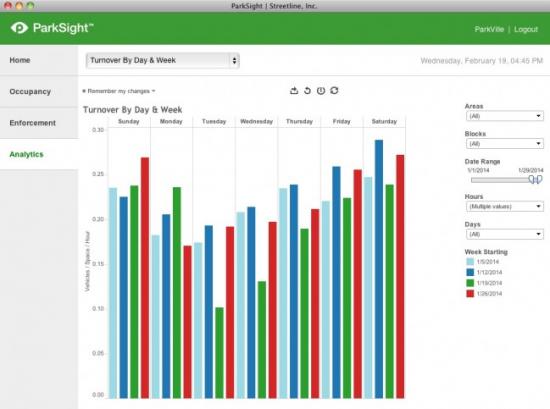 When a car parks in a space set up with a Cisco camera and Streetline software, said Yusuf, the camera detects the vehicle and passes on the data (in real time) to the cloud that the space has been occupied. The visual information collected from the camera also can be used for security purposes, such as monitoring loiterers around a car, or simply allowing the car's owner to keep an eye out for parking enforcement. And by collecting the license plate information, the state of one’s car alarm can be monitored as well.

In addition, Bronson said, better use of the city’s parking infrastructure can help ward off other increased demand costs, such as building a new parking structure.

The financial benefits for smart parking are high, according to Joseph Bradley, Cisco’s general manager for its Internet of Things consulting practice. “Parking revenue can increase by 40 to 60 percent — without raising taxes,” he said. “Parking is the No. 2 or 3 revenue generator in a city.”

Get Ready for a New Kind of 'Smart Meter'