In sustainability circles, the results of GlobeScan's and SustainAbility's just-released 2014 Sustainability Leaders Survey are not surprising. Unilever remains by far the most lauded company by our expert panel of respondents, with fully 33 percent singling it out from others.

Taking a longer view, however, the report is notable in showing how thoroughly Unilever has captured the attention of sustainability professionals globally. It also documents how much has changed within the leadership landscape since GlobeScan and SustainAbility initiated this tracking program in 1997.

Unilever is recognized as the No. 1 corporate sustainability leader for the fourth year in a row, and its lead on the second-ranked company, Patagonia, is the largest we have seen. Unilever CEO Paul Polman himself was cited on Twitter as describing the company's dominant 2014 survey results "depressing" at a recent Guardian Sustainable Business event, poignantly highlighting his view that more companies need to step up.

One third of expert respondents identified Unilever (up eight points from 2013) as a "leader in integrating sustainability into its business strategy." Nearly one in 10 (9 percent, down give points) mention Patagonia, 7 percent mention Interface (down four points) and 6 percent point to M&S. Other companies named to the top 12 include Coca-Cola, GE, IKEA (first time in top 12 list since 2004), Nestle, Natura, Nike, Puma and Walmart (down 5 points).

The 2014 Sustainability Leaders Report marks 20 years' worth of the authors' tracking and analysis of the evolution of the sustainability agenda, and of the leaders and institutions most responsible for driving it forward. Top companies over those years include BP, Dow, Interface, Shell, Unilever and Walmart. 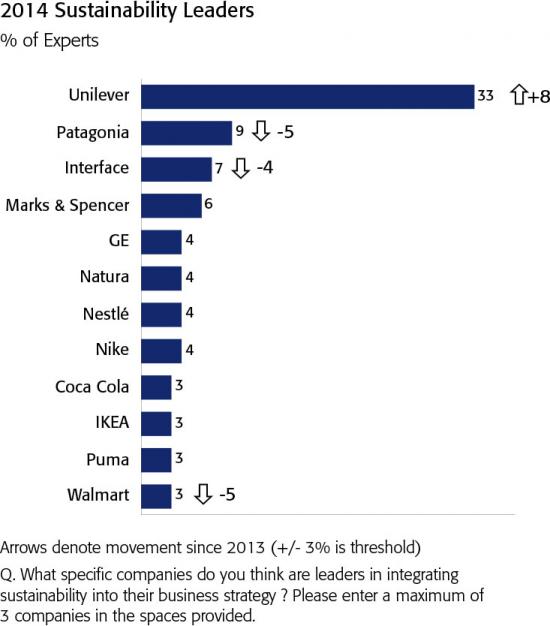 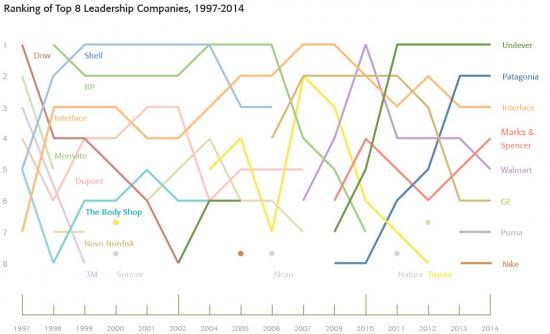 The 2014 report contains much fodder for further reflection. For example, consistent with recent years, experts see social entrepreneurs, NGOs and scientific leaders as contributing most towards sustainability leadership while government leaders are seen as demonstrating the poorest leadership across geographies. See our previous Proof Points column where we expound on this last point.

Regional variations show that leaders of multilateral organizations are better regarded outside the U.S. and Europe. Corporate leaders fare best in Asia and worst in Oceania and local government officials are rated more highly in North America than elsewhere.

The sustainability leadership landscape has changed significantly over the past two decades and is a continuing challenge across industries. Expectations from stakeholders have increased over time and new large branded platforms and programs have emerged pushing the standards up. There has been a rolling evolution of programs as some initiatives fail to live up to stakeholder expectations and drop off. Interface is the only company regularly featured in the rankings of the long term.

The hope and optimism around the Rio Convention back in 1992 to 1994 has fallen away and today, experts see technology and the private sector as playing an important role in creating political and social pressure for positive change. 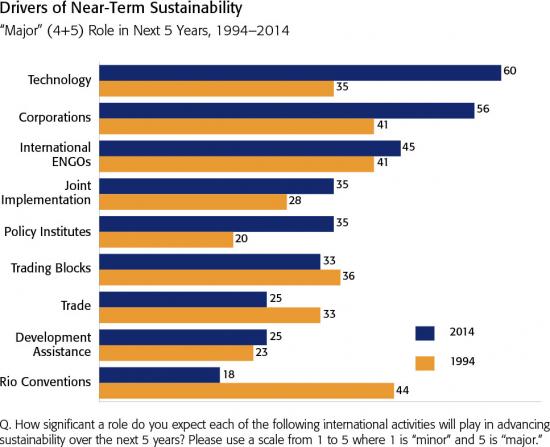 Comparing the current crop of recognized leaders with those from a decade or more ago, we see that we have moved from an era of "do no harm" leadership where risk management was the dominant framework to one where early stages of transformation are emerging.

Experts see integrating sustainability deeply within an organization, performance against goals, and sustainable products as key drivers. Competitive pressure is increasingly seen as stimulating corporate sustainability over and above other tools and drivers, including green consumerism.

In the present era, the consumer products and food industries, represented in part by major retailers who exert significant influence over global supply chains, rise to the top. In stark contrast, in 1997, 3M, Dow, Dupont, Monsanto and Shell comprised the top five.

This leads to further questions: What company or industry will be the next to take center stage, and what new combination of leadership attributes will propel it there?

For all the nuances of how experts judge the relative leadership of companies, perhaps the bigger story is that they continue to see absolute leadership — of companies and governments, particularly — so thoroughly lacking. With companies calling for governments to set policies that will unlock a sustainable future, and politicians waiting for companies to lead the way, these are frustrating, if not dangerous, times for those seeking a certain future.

The science is clear, the business case is strong, and the ethical obligations are obvious: we do not have 20 more years to achieve significant wins on pressing sustainability issues. We hope this report will spur not just dialogue, but more bold, near-term action that transforms value chains around the world.