Even amid recalls, GM declares climate change a positive disrupter

Even amid recalls, GM declares climate change a positive disrupter

In March 2013, General Motors became the first major industrial company, and the only auto maker, to sign the Climate Declaration, calling for policymakers to address climate change by promoting clean energy, boosting efficiency and limiting carbon emissions. The declaration was organized by Ceres and its Business for Innovative Climate & Energy Policy, or BICEP, coalition.

As GM explained at the time: "We must do our part to address the many sustainability challenges that come along with it. ... This means doing business differently and rewriting the rules on manufacturing. It means embracing advanced technologies. If we’re going to help lead the path to a cleaner energy future and remain competitive as a company, we need to change the way we operate and hopefully help a broader transition across industry."

Signing a public statement is relatively easy. But what happens behind the scenes? Last week, I sat down with Mike Robinson, vice president of sustainability and global regulatory affairs for GM, to hear what happens after the press releases are published and the company gets down to the hard work of addressing climate change. And how GM's climate commitment has fared amid a change in CEOs, high-profile safety recalls and increased regulatory scrutiny. As Robinson explained, signing the declaration may have helped keep GM's commitments alive and well during tough reputational times.

The interview below is edited for clarity and length.

Joel Makower: Mike, what led to GM signing the Climate Declaration in the first place?

Mike Robinson: It was a confluence of a lot of things. First of all, we had already made a decision as a company to take a position on the need for comprehensive national energy policy and to address climate change. We took a hard look at the Climate Declaration. As we went through the words, there wasn’t anything in the declaration that we either already weren’t doing or didn’t believe in.

I don’t want to say it was a no-brainer, but it became a very easy discussion within the company. I didn’t have to convince anybody it made sense, and was clear to us that companies needed to express a point of view that the politicians might pay attention to.

Makower: So what happened next? What did that lead to that wouldn’t have happened otherwise?

Robinson: It’s not like the seas parted and miracles occurred. As you know, this is a process that’s going to take some time. For us, I think it did a couple of things. First, we’ve got a number of initiatives that this helped us focus our attention on. Once we got past whether or not climate change is an issue, we got to the point where we said it’s actually an enabler if we look at this the right way; it can be disruptive in a positive way in terms of technology and the things we’re doing both in the plant and on the vehicle.

Makower: Explain how it became a positive disrupter.

Robinson: Once you get to the point where you conclude that change is inevitable, and that the current business model is just not sustainable over whatever period of time you want to define, you’re going to have to make changes as a matter of course.

We had been talking about using sustainability as a complement to and part of the business plan. This just really focused that discussion. So, you had the combination of product development people, manufacturing people, design people and everybody in between all understanding that this was where we are as a company, this is what we believe in. I think it enabled what the business strategy was going to be long-term.

What I had not contemplated was the positive impact this would have on employees, particularly outside the United States, where this is a big deal. And whether it’s Europe or Asia or South America — I mean, I heard from people I didn’t even know about how proud they were of the company, how this helped them in terms of the communications they have with their stakeholders and with governments. That was an added benefit that I hadn’t even really thought about, quite frankly. 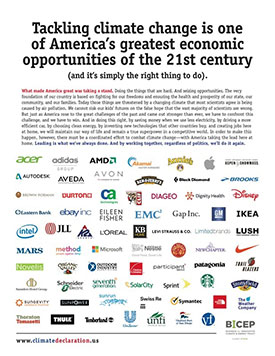 Makower: Back to this question of disrupting your business model, what might you be thinking about now that you weren’t thinking about before? How has the conversation changed?

Robinson: It’s probably changed just a matter of degree. A lot of things are going on in the company, a whole new leadership team, including members of the board, that this provides context for. That’s a really valuable thing.

So as Mary Barra came on board as the CEO, there was continuity between where [former CEO] Dan Akerson had been and where Mary wants to be on these issues. We have a new non-executive chairman of the board, Tim Solso. Tim is well steeped on these issues. He comes from Cummins and is chairman of the Board of Trustees of Earth University. He gets this stuff, so it becomes a real focal point for us in terms of how we’re going to be managing the business going forward.

Makower: So, how is GM thinking about being in business in a world of climate change?

So we’re thinking about a lot of different solution sets to different kinds of problems for, let’s say, urban mobility and congestion, and how you deal with that differently than you might have dealt with it 10 or 15 years ago.

Makower: I have to deal with the elephant in the room here. GM recently has been the subject of recalls and investigations. How has that affected your approach to the view of climate change or any of the sustainability paths that you’ve been on?

Robinson: It’s a fair question, and you would assume that it’s had a disruptive effect on the work that we’re doing on the sustainability front. The truth is, it has zero negative effect on what we’re doing there. In fact, quite to my surprise, because she’s got so much else on her plate, our latest sustainability report contains a message from the CEO. We had put some thoughts together for Mary. And frankly, given everything else that’s going on, I might have guessed that she would have not had much time to spend on it. She spent a considerable amount of time on it. I can tell you she made it her own because she knows it’s important and it’s fundamental to both the internal communications with our employees, but also the external world. I was very, very pleased at how much input she provided to that message and how she tweaked it to make it her own.

Makower: So you feel good that as the company comes out from under this cloud that sustainability will be as strong as it’s ever been?

Robinson: I will tell you — these are my words, not hers — that Mary has accurately explained this as a moment of definition for GM, an opportunity to explain who we are going forward and to try to take positively out of this that kind of a lesson. I think that’s entirely consistent with our sustainability story, and I think it reinforces it, actually.

IF11: A Look Behind Philips' Quest for Sustainable Innovation