How one Colorado town is accelerating clean energy

How one Colorado town is accelerating clean energy

The time is ripe to significantly lower our collective carbon footprint on a larger and larger scale. The confluence of virtual certainty about anthropogenic climate change and game-changing advances in clean energy technologies is creating a groundswell of support and true potential for substantial action to address the carbon footprint of modern society.

Some people are motivated to pursue energy efficiency and renewable energy because of climate change; some are most concerned about the pollution of our air, water and lands caused by the extraction and use of fossil fuels, including that caused by the recent dramatic increase in the use of fracking to extract oil and gas. And some simply want or need to save money on their energy bills.

Whatever the motivations, they all point toward reducing our use of fossil fuels to produce electricity, heat and cool our buildings, and travel from place to place in our everyday lives.

The challenge, of course, is to overcome the inertia of entrenched industries, vested interests, outdated infrastructure and poor energy habits to actually affect change. While many people long may have agreed with the general principle of energy sustainability, funding the needed change is where the rubber meets the road. Funding is needed not only for actual updates in technology, but also for efforts to reach out and educate the public about how their everyday actions matter in the big picture. Bridging the divide between the will of the people and the funding to make that will happen has been front and center in Lafayette, Colo.

Lafayette is a small city between Denver and Boulder. A majority of Lafayette’s voters support progressive efforts such as local growth control ordinances and open space acquisition. Very recently, they even passed a cutting-edge initiative that not only allows the city to ban hydraulic fracturing, but which also defines clean air and clean water as civil rights.

In November, the persistence and hard work of concerned citizens culminated in the passage of a citizens’ initiative to dedicate funds equivalent to a 3 percent energy tax to energy efficiency and renewable energy in our city. However, due to technical issues involving a second ballot question, the actual funding fell through. Fortunately for us, the demonstration of support from voters has set the stage for serious consideration of other funding mechanisms and participation by the city. 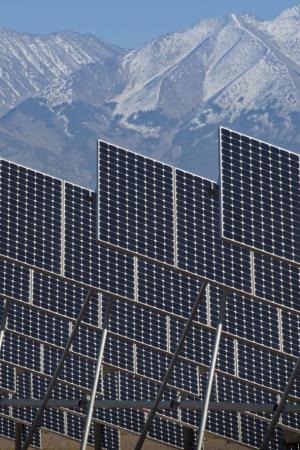 The city itself already has demonstrated its commitment to energy efficiency and renewable energy. It has invested in a substantial energy audit of its facilities and has implemented a number of strategies that have saved hundreds of thousands of dollars in energy costs to date. It also has installed nearly 1.5 MW of solar PV capacity, and is gold certified as a Solar-Friendly Community. The Lafayette Energy Sustainability Advisory Committee (LESAC), with very limited funding, also has made strides in addressing the carbon footprint of the city.

While we’ve made some progress in energy efficiency and alternative energy, much potential remains in the municipal, residential and commercial sectors. The city could be an invaluable partner in the areas of outreach and education, as well as by providing funding mechanisms to facilitate investments that will save energy and money over the longer term.

Key questions coming into eLab Accelerator mainly involved funding, although coming up with strategies to get the most “bang for the buck” ranked up there as well. A primary conundrum flowed from these questions: Should a substantial but arbitrary amount of funds be raised first, or should a comprehensive plan be formed first, with funding strategies to follow? What are the most appropriate ways to raise significant funds that can make a real difference?

eLab Accelerator brought together key stakeholders and experts, including Lafayette’s city administrator, a member of City Council, a member of LESAC, an attorney who specializes in energy issues and a citizen activist who initiated and led the eLab process for this group. These participants laid their differences on the table, and then worked to find their way back to common ground on ways to move forward. Our group established timelines to garner community support and discussed several ways to finance sustainability efforts.

The lessons learned at eLab were first taken back to the city in the form of a presentation to City Council which summarized the eLab process and illustrated likely paths forward. In the near future, a stakeholders group will be formed within the community; it will include the citizens group that has been a primary driver of this latest effort, members of the business community, members of LESAC and others. LESAC will serve as liaison between the stakeholders group and City Council until a clear path forward has been established. It is quite possible that designated funding for energy sustainability will be sought through the ballot in November. Educational public meetings already have begun, with expert speakers on various subjects that illustrate potential programs and strategies, as well as inspiring ever greater participation and discussion.

Primary goals moving forward will be to create a new community culture of awareness surrounding sustainability issues, as well as to develop a model of substantial decarbonization of our city that any other community can adopt.

The eLab Accelerator process has been instrumental in focusing discussion among key players in Lafayette, enhancing our chances of achieving substantial progress on clean energy and action on climate change, and perhaps most important, raising the bar on our clean energy goals.

This story was originally published on the Rocky Mountain Institute blog. Top photo of Wilson Peak and the San Juan Mountains in Colorado by robert cicchetti via Shutterstock

San Francisco braces for the Big One with microgrids

How UNC is creating a renewable energy future