In the wake of the White House's climate blitz earlier this month, including the latest National Climate Assessment release, I find myself feeling strangely optimistic that America finally might be ready to prepare our homes, cities and public spaces for the impacts of climate change — particularly the effects of sea level rise.

Normally my optimism would be tempered by the sobering fact that Americans today still rank climate change and global warming dead last on the list of environmental priorities for the country.

But I am encouraged and inspired by the rise of what I'm calling resiliency catalysts. These are tools that broaden public awareness on climate change and drive implementation of adaptation strategies. At the cutting edge of this movement are powerful climate visualization tools that, on a higher level, show rather than tell the story of our future.

Take the National Climate Assessment website itself — arguably the best climate website produced. It features an intuitive design by antistatic that offers easily navigable and digestible results from the report along with little rabbit holes for digging deeper into the data, plus modern HTML5 video backgrounds. The Climate Assessment's sea level rise visualizations build off of NOAA's powerful Sea Level Rise and Coastal Flooding Impacts Viewer, which lets you compare 1 to 6 feet of sea level rise in a variety of coastal locations.

Then there's this jaw-dropping data visualization video of Earth climate models, which has logged more than 500,000 hits in its first five months on YouTube. The video, produced by International Geosphere-Biosphere Programme and Globaia, adds to the pioneering work of firms such as Carbon Visuals, whose broad range of 3D visualizations include the below image, which ranks fossil fuel companies according to the actual volume of CO2 emissions for which they are historically responsible. 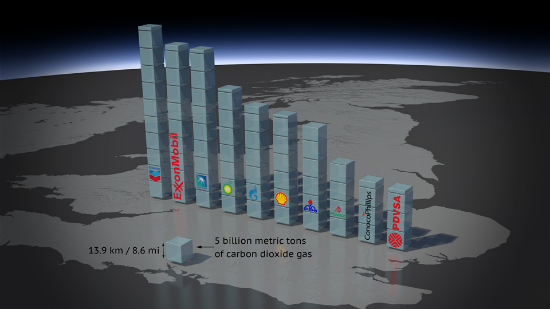 Meanwhile, the folks at Climate Central are enjoying their moment in the spotlight. Their Surging Seas images of American cities inundated by 12 feet of sea level rise went viral and got picked up by major outlets including the New York Daily News and the Daily Mail.

Despite the importance of these early resiliency catalysts, however, this remains an uphill battle. We are witnessing the rise and dominance of “dark money” groups which already have spent more than $500 million trying to convince the world not to prepare for climate impacts. Despite how compelling our story might be, we're being drowned out.

What's worse, adapting to 3 feet of sea level rise — including the other impacts — will be massively expensive — an estimated $28 trillion, according to WWF and Allianz, the largest insurance company in the world. And every year we wait to take action adds a cost multiplier on the back end. It will be a lot more expensive to play offense tomorrow than defense today.

Rajendra Pachauri, chairman of the U.N. Intergovernmental Panel on Climate Change, says in a recent World Bank blog post, “If you allow emissions to increase, the impact of climate change will become progressively more serious, and the technologies that you would have to put in place to reduce emissions very sharply would be that much more expensive.”

This is in part why a handful of coastal cities are wasting no time putting coastal development plans in place. From Vancouver, B.C., which is using aerial laser scanning and advanced city modeling to anticipate inundation zones, to Key West, Fla., which is planning for 2 feet of sea level rise by 2060, local, state and federal governments globally are beginning to pass laws to advance adaptation strategies. But these forward-thinking cities only represent the vanguard, unfortunately, and the clock is ticking. 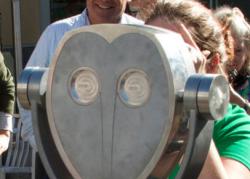 To rapidly scale public support for such policies, we need to think creatively and invest quickly in pioneering storytelling methods that enhance public understanding of the current and future impacts of climate change.

This challenge inspired our team at Owlized to partner with Climate Access, a nonprofit focused on studying and promoting the most effective climate communication practices, to design such a storytelling platform. Our idea — a device that enables people to view the effects of projected sea level rise, where they are standing — has attracted partners including NOAA's Climate Program, the California Coastal Commission, Autodesk, Stanford's Woods Institute for the Environment and the San Francisco Department of Environment.

The sea level rise viewer represents just one possible resiliency catalyst. The most important final step — the one we critically depend on — will be amplifying the larger climate story to a global audience with enough time to prepare responsibly.

With climate.data.gov and state and local Open Data coming online, the timing is perfect for dreaming big and executing quickly to design the climate resiliency catalysts of tomorrow.

4 ways to take green cities to the next level