If you follow the big conversations, you get the distinct feeling green design is poised to scale up. You hear it at places such as GreenBuild, the U.S. Green Building Council's conference, and at the UnConference held by the International Living Future Institute. You see it if you follow Alex Wilson's work at the Resilient Design Institute. The green design community is repeatedly saying it's ready to move from single buildings to community scale, "resilient" development.

Yet, when Rob Bennett, leader of EcoDistricts, polled a roomful of some of the deepest green design professionals in North America last week, he found just a quarter of the audience was working on a district project. Only about 10 percent of them have seen these projects actually get underway.

So why not more?

It takes more than tools

It's not for a lack of processes. When it comes to developing on a district scale, a number of rating systems and frameworks provide developers, owners and entities standards and guides for green design. USGBC's LEED for Neighborhood Development (LEED-ND) and ILFI's Living Communities provide certification. EcoDistricts and One Planet Living provide guidance and tools.

Kevin Hydes, CEO and founder of Integral Group — a deep-green MEP (mechanical, electrical and plumbing) firm that works on Living Buildings, ILFI Certified Net Zero buildings and LEED buildings alike — invited the leaders of these organizations to sit together at the ILFI's UnConference last week in Portland to explore how the organizations can scale up their efforts. The leaders included his longtime friends, Bennett, Jason McLennan (ILFI), Pooran Desai (Bioregional/One Planet Communities) and Brendan Owens (USGBC).

Integral has done a fair amount of work on a district scale on the East Coast and in Canada. Hydes has bridged the world of USGBC — where he founded several chapters and was the president of World GBC — with the world of Living Future, where he has been one of the most tenacious financial supporters of ILFI. Integral was also a founding supporter of EcoDistricts. Hydes has a history of building various facets of the green building movement in collaboration with each one of the panelists.

McLennan said: "Kevin called us all up recently and said, "You guys are all working at this scale, and should you be doing it together?"

Hydes introduced Bennett, who he met in 1996 when they were talking about forming the Cascadia Green Building Council. "Does anyone recall how long his hair was then?" Hydes ribbed. After helping to establish Cascadia, which became the home of ILFI, Bennett went on to work on the Vancouver Olympics, then the Clinton Foundation, then returned to Portland to form EcoDistricts.

Bennett rebutted the numbers from his informal audience poll: "There's a huge market for neighborhood sustainability. We're just in the weeds. We spend too much time making tools. The trick with neighborhoods is the supply chain is way different."

Other challenges are slowing the movement toward district-scale development, according to Owens. "On a neighborhood scale, we don't know enough about infrastructure," he said, adding that he had never spoken at Living Future before "because it's usually a better place for me to listen."

Owens's grace and self-deprecation go a long way in easing any tensions between the two groups. ILFI's Living Building Challenge embraces and builds on LEED ratings, but is based on the premise that LEED just isn't challenging enough to make a dent in the current climate change crisis. 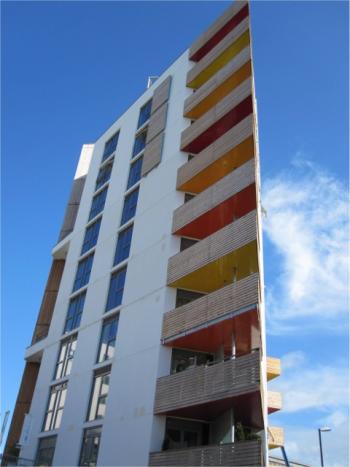 USGBC's latest version of standards (LEED v4) just came out at the end of last year, and is still being tweaked.

"With LEED v4 in the rearview mirror, I've been thinking a lot about collaboration," Owens said. "The conversation we've been having is very insular. We wrote a credit about demand response to change the way a building operates on the grid and a guy from the industry said, 'This is a good idea but you guys don't know what you are doing. So let's collaborate.'"

Always flying at 30,000 feet, McLennan responded, "We all need to be reminded that the purpose is not certifying or having a process. Don't fall in love with v4 or LBC. We need a lot of tools, but let's not lose sight of the purpose. The purpose is so that whatever you are doing, you are living differently."

"We have to take a whole lifestyles approach," Desai agreed, going on to share lessons from the BedZed development he created 20 years ago in South London, probably the first serious attempt at creating a large-scale net zero community. He described the BedZed experiment as "ordinary people trying to get products and services in a more sustainable way and more locally."

Along with BedZed, in collaboration with the World Wildlife Fund, Desai developed One Planet Living, a set of 10 "totally scalable and universal" principles that cover renewable energy, buildings, neighborhoods, products and services. One Planet is not a certification process. "It's more flexible," Desai said.

Bennett also likes the concept of flexibility, especially when it comes to zoning and planning within neighborhoods. "It's about unleashing the people in the neighborhoods and giving them the flexibility to make change," he said, citing as examples Vancouver's and Portland's efforts to bring back granny flats into neighborhoods that zoned them out.

Bennett believes we need disruptive strategies, such as bike sharing, to take root in neighborhoods rather than at the city level.

"The good news is there's a lot of disruptors," he said. "The shared economy is absolutely turning on its head the way we use our assets in the community. People are inventing really cool ways we can come together. Kids today are buying fewer cars because of services available to provide cars when they need them. We need to make sure the tools we are inventing are inviting of that creativity, and innovation needs to be part of city planning. ... Primarily it's about flexibility. It's about being able to interconnect over time." 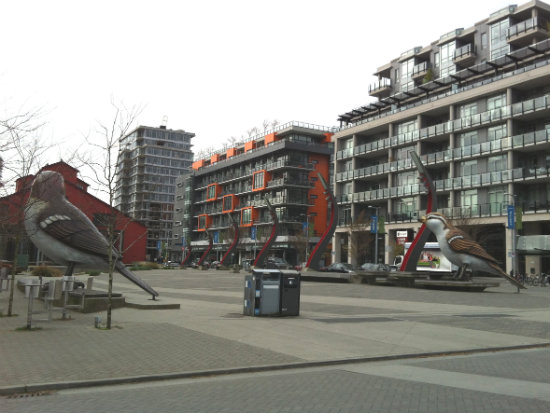 Owens agreed and brought up the ideal of three blocks interconnecting. "We are going to be looking at much smaller more distributed systems that connect to a larger network," he said.

"It's dynamic," McLennan added. "The same principles need to express themselves regardless of scale. Sometimes we need to 'scale jump.' The question becomes, what is the sweet spot for energy systems, transportation, water and waste?" For example, McLennan thinks "the sweet spot" for waste is composting.

"Sometimes we want a more efficient system so we make it bigger," McLennan continued. "But whenever we get too big, people get disconnected. There's a psychological and human dimension we need to think about."

Agreeing on purpose and scale is one step, and Hydes would like to see the leaders keep coming together to look for additional common ground.

"Instead of focusing on what's the difference between Living Buildings and LEED Platinum, we could take the lessons we've learned and communicate them and create a common language," Owens said.

Hydes promises he will be bringing the leaders together regularly through a coalition or emerging joint project.

"To start with, I really just wanted to see them all talking to each other around the table," Hydes said. "I want them to take a look at where they intersect and where they can collaborate more in the future."