How She Leads spotlights the career paths of women in influential roles in sustainable business.

Monique Oxender's jump to Keurig Green Mountain in 2012 after eight years with Ford Motor Company was a dramatic change. But the switch she made before that was even more life-altering: when she left her career as a high-school teacher to study for her MBA.

During her graduate studies, Oxender spent three years researching coffee, living on a farm and investigating the effects of the nascent Fair Trade certification on the coffee supply chain. Although her sustainability career took a detour to Ford, she jumped at the chance to continue that research. "One reason I really wanted to come here is because I could still play in the manufacturing space and also embrace the agricultural side of things," she said.

Today, Keurig Green Mountain is one of the biggest purchasers of Fair Trade Certified beans. Over the past several months, its senior director of sustainability has made headlines for two other high-profile commitments: its pledge to make 100 percent of the company's K-Cups recyclable by 2020 and her team's related decision to support Walmart's Closed Loop Fund, a $100 million initiative to support recycling infrastructure investments. Oxender discusses how to build consensus and why it's important for sustainability managers to speak the language of key stakeholders.

Heather Clancy: How hard was it to switch from your previous position at Ford to Keurig Green Mountain?

Monique Oxender: The biggest challenge in switching was not at all the practice of sustainability within a corporate context, because I think there are so many parallels and similarities. Honestly, the biggest difference was culture. I spent so long in a very old-school, male-dominated institutional kind of company. You know what an amazing legacy and history Ford has: to try to influence change in a company like Ford is like shifting the course of the Titanic. It takes a long time, a lot of patience, a lot of effort. Then, to come into a company that was very fast-moving. and the pace has only increased over the time that I’ve been here. There is constant redefining, and a lot of excitement about that change, whereas when you look at change within an institution as big as Ford, change is looked at with much more fear or uncertainty.

Clancy: Given that the cultures are very different, what lessons from your previous position can you apply at your current one?

Oxender: Ford was, I think, one of the first — at least one of the first to do it really well — to do an integrated structure. Maybe it was someone’s brainchild that was just well-timed or maybe it was necessary because of really constrained resources. I wasn’t there when that decision was made, but I know that it worked really well. There were sustainability people all over the organization.

What I did was hand-in-hand, lock-step with the buyers, with the quality engineers, with R&D and the guys setting the specs. It was very, very integrated, and that’s something that we’re trying to achieve here now. The other aspect is that Ford is really big and Keurig is learning how to be big. Having that experience has also been very applicable, as I have perspective on being able to establish and integrate processes. 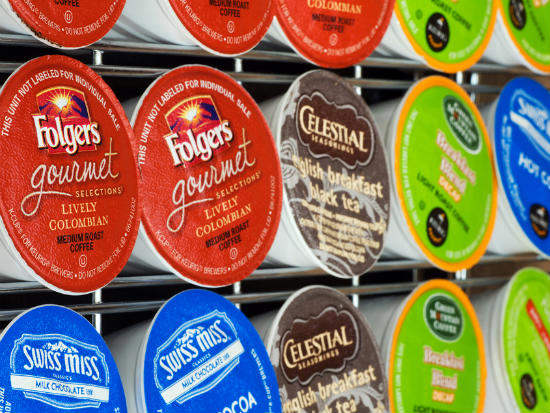 Clancy: How did your team go about defining the K-Cup goal?

Oxender: We did a materiality assessment. Then, we went out to over 30 external stakeholders who were not necessarily buddy-buddy friends with us but were subject matter experts in the field: whether it was recycling or the infrastructure piece or the materials development or [lifecycle assessments]. With some of them, we weren’t even sure why we were asking them specifically, but we went to them for insight and expertise. We also went to more than 120 people internally across the organization, all levels, to establish where our materiality matrix fit within their priorities.

Then we mapped that [information] across our value chain. So [we asked] where in our value chain are these issues arising, and thus, where do we need to insert solutions or leverage these places so that we can facilitate change, the change that needs to happen?

After that process had been completed, we established an external advisory panel. We had a really great experience doing the materiality assessment with a number of these stakeholders. We now meet three times a year. We gave them an inside view before we had finalized the goals and asked: 'Well, what do you think about these? Give us some feedback. Are these the right goals? Are they aggressive enough? Are they too aggressive?' We took that feedback, re-evaluated the goals and then came to a place where we were read to seek the executive approvals and board approvals to run with them.

Clancy: What special steps did you take with the internal team to make sure that they were on board with the vision?

Oxender: One thing I think it's important to understand about this company is that historically it has been consensus-based. As we grow larger, it’s harder and harder to be that way, but opinions are still very much sought after, listened to, heard, and there’s a real desire to make sure that we surface the internal expertise. You have to go to the bottom and figure out what’s possible, what’s been done, what’s been shot down. Then, you also have to work from the top and understand the limitations, what's been tried, what resources are needed, etc. We use that top-down, bottoms-up approach to try to make sure everyone on both sides of the spectrum are aligned that this is where we’re going, and what actions need to happen in order to get there.

I would say one of the best experiences that we had [when it came to this particular goal] was facilitating an understanding of the challenges specifically at the recycling centers. We’ve had some really powerful visits where we’ve brought some of our executive team, some of our marketers onsite to actually see what happens when those recycling trucks pull up and dump their loads, how the items are sorted, what falls out, what doesn’t, what makes it through.

Then [getting them to] talk to the operators to understand their pain points, the opportunities, and the ways in which they’re working with other materials or other partners to facilitate changes that are going to improve recycling rates, or improve recovery rates.

Clancy: You're completing a comprehensive water footprint assessment. What have you discovered so far?

Oxender: We are going to publish the results of that footprint soon, I hope. We have done the preliminary footprint for our whole system, including coffee. The one thing I can tell you, which validated what we already knew, is that the majority of the impact related to our water footprint are in coffee cultivation.

You’ll notice that we did not set a 2020 goal relative to decreasing our footprint, our water footprint in the same way that we did with greenhouse gases, and the reason was because we needed to do this baseline. One of the next steps is to look at that and say, 'Okay. How do we establish reduction targets, a replenishment target?' We’re working through that now. 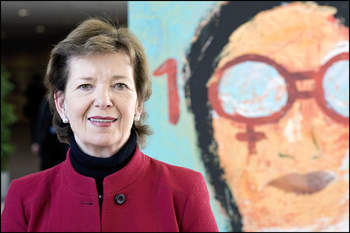 Clancy: Who has been your most inspirational mentor?

Oxender: I want it to be a woman, but unfortunately in my professional career, I’ve not had a female mentor or really even a strong career mentor. I have had key people, I think all men, mainly because of where I came from in automotive. It taught me lessons about how to survive and thrive in corporate world. But when I look at inspiration overall, it comes from my mom.

My mother taught me how to survive four brothers, which I equate to surviving in a male-dominated world. She also taught me to balance priorities, especially across a career and motherhood, which is something that’s really important, and to hold onto your values. [Former Irish president and United Nations High Commissioner for Human Rights] Mary Robinson [recently] gave an address around women leaders, and leading as a woman. Not with male qualities, but leading with those kind of characteristics that make us innately female. It spoke to me so much, because I think that that’s something that I did get from my mother.

What I admire in looking at other women in leadership is how they lead, especially if it is consistent with the values that I think that we’re oftentimes brought up to have, but then oftentimes conditioned out of having if we want to pursue a career and to be a leader within business.

Clancy: What advice would you give to someone aspiring to a career similar to yours?

Oxender: It’s the same advice that I give to someone who wants to go into teaching: learn as many languages as you can. I’m not referring to Spanish or Portuguese or French. It's about really learning how to speak to people at all levels and meet them at the level that they’re at. So within a hierarchy, it’s the executive team or the board members down to the plant floor. And knowing that that person’s going to receive you and communicate with you openly much quicker, much easier, but then also across the function.

This was something I learned quickly at Ford: speaking to an engineer is very, very different than speaking to a buyer versus a sales guy. So making sure that if you really want to navigate across the organization — as I think that you really need to do to be able to lead in sustainability in an integrated fashion in a business — you have to learn as many of those languages as you can and learn them effectively.

Clancy: What do you consider to be your most important achievement so far?

Oxender: The one that’s most important and I am most proud of was the industry cooperation that we achieved in automotive. It took blood, sweat and tears, and a labor of love to build a coalition of automakers to move towards greater responsibility in supply chain. It went from initially engaging with just the big three: Ford, GM and Chrysler. Then the Japanese came: Honda and Toyota joined us. Then, I’m going over to Europe and recruiting Peugeot and Renault. Then the German companies.

Then over a period of six or seven years, we were all sitting at the table having amazing conversations that resulted in action. It wasn’t conversation after conversation, we actually found a common agenda, a common mission, and we moved. We were able to achieve so much, and I took so much professional and personal satisfaction out of leading that initiative. The hardest thing about leaving automotive was the really deep relationships that I was able to form across the globe, across the industry, and knowing that you were effecting so much change.

Episode 85: How AI may help sustainability; Keurig dives into recycling

How She Leads: Kathleen Shaver, Cisco