Just when you thought Newsweek’s Green Rankings had vanished along with its print magazine, both are back this year. But you won’t recognize companies now in leadership positions from years past.

Those in the lead among the top 500 U.S. companies are Allergan, famous for Botox; Photoshop creator Adobe Systems; and Ball Corporation, which manufactures beer cans and other packaging (and formerly the iconic Ball Mason jars).

Back then, finance and tech names dominated the top 10. However, now leading among U.S. companies are four health care brands and three companies in the materials sector, as well as one name each in IT, consumer staples and industrials.

In case you find more of a pattern among the top 25 U.S. companies, you'll find six in IT, four each in materials and health care, three each in consumer discretionary and industrials, and two in consumer staples.

On Newsweek’s Global 500 list this year, media and telecom company Vivendi was at No. 1. Allergan and Adobe, respectively, hold the No. 2 and No. 3 positions. 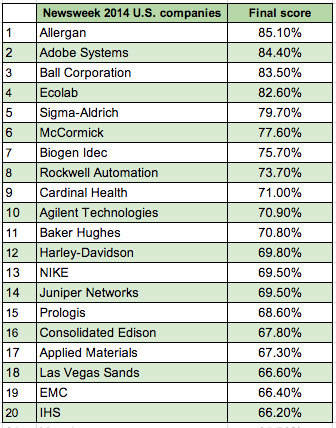 That’s a big promotion for Vivendi from the last Green Rankings, when the company held position No. 149 in 2012. Neither Allergan nor Adobe were on the list at all back then.

No single sector dominates in the current Global top 10; there are two telecom companies, two health care companies, two consumer discretionary, two in industrials, as well as one IT and one materials company.

Dominating the top 25 Global rankings were seven consumer discretionary companies (including three in apparel and two carmakers), five financial brands and three each in telecom, health care and industrials.

That said, comparing previous rankings is bound to be an apples-to-oranges exercise, as Newsweek's methodology has changed almost each time it has released rankings since it began in 2009. (See Joel Makower's story for the inside scoop.) After a hiatus in 2013, the Newsweek Green Rankings, along with the Newsweek book itself, have been restructured, from their ownership and methodology on up.

Corporate Knights is the new partner for the 2014 Newsweek ratings. The Toronto-based magazine is known for its own lists, such as the Best 50 Corporate Citizens of Canada. It also offers an app, CK Ranker, to help smaller businesses rank their “green” credentials.

When we last saw the Newsweek Green Rankings in 2012, Newsweek was part of the IAC Newsweek Daily Beast Company, with Tina Brown as chief editor. Last year, IBT Media bought Newsweek, and decided to revive the print edition in March.

In 2012, Trucost and Sustainalytics produced the green rankings with Newsweek. Sustainalytics had joined the process for the 2011 rankings, after MSCI bowed out.

To determine the rankings it considers eight key performance indicators, assigning a score of 0 to 100 for each. These include “productivity” in energy, greenhouse gases, water and waste. The rankings also take into account the existence of a sustainability board; the existence of third-party environmental metrics; and “sustainability pay link,” which attempts to tie the earnings of senior executives to the achievement of certain corporate environmental targets. 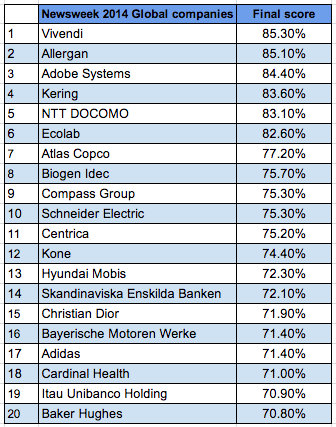 Corporate sustainability professionals spend an aching amount of time submitting reports for rankings — including to the DJSI, CDP, CRO and others.

Along with that tedious work come complaints about the shortcomings of various rankings systems. Newsweek’s methodology, for instance, uses only publicly available data. If your corporation doesn’t make public certain details that others do, then it might get dinged in the final tally.

Without diving into the methodologies of other corporate sustainability rankings, it’s worth noting that the results of the various lists often are strikingly different. For example, you won’t find any of the top 10 U.S. or Global companies from the current Newsweek lists among the DJSI’s top 10 rankings from 2013.

GreenBiz publishes its own corporate rankings. We teamed up with Trucost to publish the Natural Capital Leaders Index in January in our annual State of Green Business Report. That list recognizes companies at the forefront of “decoupling economic growth from environmental impact.”

The experts who reviewed and commented on the Newsweek-Corporate Knights methodology include author and designer William McDonough and Natural Capital Solutions President Hunter Lovins.

Top image of Newsweek logos by 360b via Shutterstock