In its quest for carbon neutrality, Cornell University has made some substantial and risky investments: $58 million just for the lake-source cooling project that usurps the job of eight traditional chillers.

More recently, it teamed up with Verizon Wireless to create a ground-sourced cooling system for an on-campus cellular communications tower. The technology uses six underground heat exchangers and three water-to-air heat pumps to keep the equipment at the proper temperature, rather than standard air conditioners.

"It was a perfect opportunity for Verizon to get something useful out of this research, but it also made a lot of sense for us, because not much is known about this kind of system for cooling cell phone towers," said Jeff Tester, the Croll Professor or Sustainable Energy Systems at Cornell's School of Chemical and Biomolecular Engineering, who is advising the project.

The results of the tower test will take several years to collect but so far, many of Cornell's energy innovations have yielded some pretty dramatic results. For example, the lake-cooling approach alone has reduced the power required for cooling by almost 80 percent, a reduction of more than 20 million kilowatt-hours (kWhs) on an annual basis, according to published information detailing the university's ongoing analysis of the project.

To optimize the performance of that system — along with its sophisticated steam and power generation plant, and water filtration processes — the campus operations team relies heavily on Proficy software from the GE Intelligent Platforms group. The recent addition of mobile information access from iPads has cut down on maintenance costs.

"It speeds up our reaction time and is a more efficient use of our resources," said Bill Richards, senior network engineer for the Cornell Utilities Department.

With more than 260 major buildings sited on 750 contiguous acres, the university requires 35 megawatts (MW) of capacity to keep things running. The university operates a central utility plant with a combined heat and power design, generating steam for heating the buildings and electricity to run chillers and provide building power. This facility generates about 180 million kWhs. 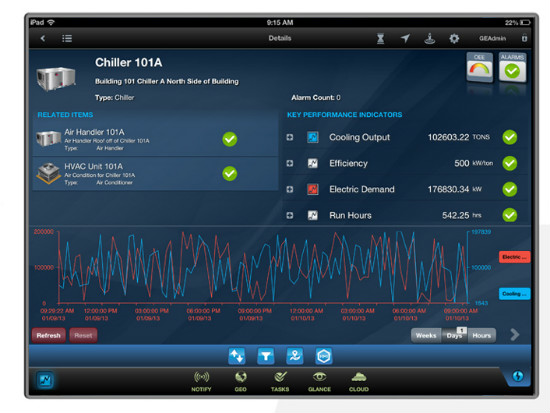 For an idea of how Proficy works, consider how the technology is used alongside the Cornell Lake Source Cooling Project, a district cooling system that pipes water in from nearby Cayuga Lake to cool about 40 percent of the central campus. The water is piped in from the chilly 39 degrees Fahrenheit deep waters, and then returned to the lake at slightly higher depths, where the temperature is closer to 54 degrees.  The system was designed to replace eight chilling machines. It requires 0.1 kW/ton to operate, just 13 percent of the electricity required to run the original campus cooling system.

Proficy controls and software monitor the pumps, electrical components and pressure sensors. Among other things, it provides predictive analytics that help the operations team determine whether preventive maintenance is needed on the pipes to clean out lake debris or zebra mussel build-up.

Aside from the cooling project, Cornell has used Proficy to justify ongoing investments in the combined heating and central energy plant, according to Richards. Among the reports it is able to generate using the software a statistical analyst of steam production, power generation and chilled water demand. In addition, it generates scenario forecasts over a 25-year timeframe.

The mobile technology dramatically has changed the way that Richards and the four-person operations team deal with issues related to the plant, reducing the time it takes to troubleshoot solutions by an estimated 40 percent.

"When things go wrong at a heating and power plant, they typically go wrong in the middle of the night or on a holiday," he said. "The typical response in the past has been to call everyone in."

The team can access Proficy remotely to see where the problem lies and then act accordingly. While it's tough for Richards to quantify the impact of these shorter power-outage durations, he points to Cornell's research labs for an illustration of why resiliency matters. Some animals housed there cost $5,000 to $6,000 apiece, while maintaining consistent temperatures is crucial for most plant experiments, Richards noted. Erratic temperature fluctuations could be costly.

"This isn't just a matter of comfort," he said.

Why the largest microgrid in the U.S. is in Austin

Will the Ocean Cool Your Next Data Center?