In February, trucks from Waste Management, Inc. started working new routes in Los Angeles County, California. Waste Management collects food scraps from restaurants, grocery stores, hotels and food processing plants, takes them to a company facility in Carson City, and grinds them into a slurry. That liquid is taken to a Los Angeles County wastewater treatment plant, where it is mixed in with sewage — one part food waste to nine parts human waste — and processed in an anaerobic digester.

The end result? Biogas that can be burned as fuel — a benefit that may encourage the Los Angeles County Sanitation District to expand the initiative into a full-scale program after two years.

The facility is hardly the first sewage treatment plant to take in food waste, and it certainly won’t be the last. Efforts to recycle food waste are growing nationwide, and many are doing it the traditional way, by collecting and composting food scraps. But there is increasing interest in sending food waste, particularly from commercial sources, to facilities that use anaerobic digesters to convert the food into biogas.

About 15 wastewater treatment facilities in the U.S. are engaged in this practice — a small number, but that’s up from one or two about a decade ago, according to the American Biogas Council. Following the lead of Europe — which is increasingly either composting its food waste, incinerating it, or processing it in biodigesters — more U.S. cities are trying new ways to harvest energy from food that otherwise would have rotted in landfills and emitted methane, a powerful greenhouse gas.

"Whether the food waste is diverted to traditional composting sites or goes to an anaerobic digester, I think that's a good use of that resource,” said Mark Hutchinson, an agricultural extension professor at the University of Maine. “We no longer consider it to be a waste product — it's something we're trying to manage as a resource."

According to the American Biogas Council, about 860 sewage treatment plants in the U.S. produce biogas using anaerobic digestion, in which bacteria break down the organic matter in an oxygen-free environment and produce biogas composed primarily of methane. That gas is generally burned on site to help power the facilities. (Another 381 plants have anaerobic digesters but are flaring the gas.)

Some facilities — including the Carson City plant and treatment plants in West Lafayette, Indiana and Des Moines, Iowa — have started taking in food waste to "co-digest" with sewage in tanks or large digester “eggs.” In addition to biogas, anaerobic digesters produce decomposed organic matter than can be used as fertilizer.

In 2002, California's East Bay Municipal Utility District (EBMUD), which serves Oakland and Berkeley, became the first sewage treatment plant in the U.S. to digest food waste with wastewater and produce biogas. And in 2012, the utility district became the first to generate, on-site, more energy than it needs through anaerobic co-digestion. In the last fiscal year, the facility produced about six megawatts of power and made about $1 million by selling surplus electricity to the Port of Oakland via the grid operated by Pacific Gas and Electric. 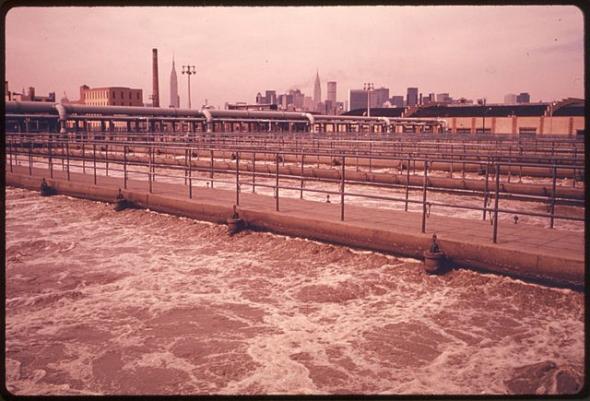 New York City, as part of an ongoing pilot program, sent tons of food waste from Brooklyn and Staten Island to a waste transfer station, where it was pulverized into a slurry. It was then sent to the Newtown Creek wastewater treatment plant in Brooklyn and processed in an anaerobic digester to produce biogas for the facility. The city — which is now scaling up the collection and composting of food scraps — is evaluating the effectiveness of the Newtown Creek project.

Bridget Anderson, the Department of Sanitation's acting deputy commissioner for recycling and sustainability, is hopeful the project will continue. "We want to keep the material as close to New York City as possible,” she said. “And obviously, creating renewable energy is another beneficial use that we wanted to explore besides composting."

Connecticut and Vermont have banned commercial food waste from landfills. In Massachusetts, new food waste disposal regulations will go into effect in October, requiring any business that disposes of at least one ton of organic material a week to either donate the food, send it for composting or anaerobic digestion, or ship it to animal feed operations. State agencies awarded a $100,000 grant to a wastewater treatment plant in Boston Harbor to study the impact that co-digesting food waste will have on its operations.

The state also is talking with businesses about creating markets for the compost and digestion products. "Let's say you're a large college that produces a lot of this material — we want the college to be able to go out and say, 'Where can I best get rid of this stuff at the best price?'" said David Cash, commissioner of the Massachusetts Department of Environmental Protection. "Or maybe they want to figure out how to do it themselves on campus.”

Waste management companies and cities are interested in anaerobic digestion because it provides another outlet for the growing amounts of food waste they're trying to keep out of landfills. The addition of some food waste is beneficial to anaerobic digesters at sewage treatment plants because more organic matter means more energy production. Since food waste is richer in organic matter than manure or sewage, it generally produces several times more methane per unit of volume.

"It's been an evolution of having these digesters and flaring the gas, to putting that gas to good use, to now moving into, 'I want to actually generate more gas,'" said Chris Hornback, senior director of regulatory affairs for the National Association of Clean Water Agencies.

Recycling food waste may be relatively new in the U.S., but it's common in other countries, particularly in Europe. In Germany, residential food waste is mainly composted, with more than a quarter of it biodigested first, according to David Wilken, head of waste, fertilization and hygiene at the German Biogas Association. Most industrial and commercial food waste is broken down in biodigesters. 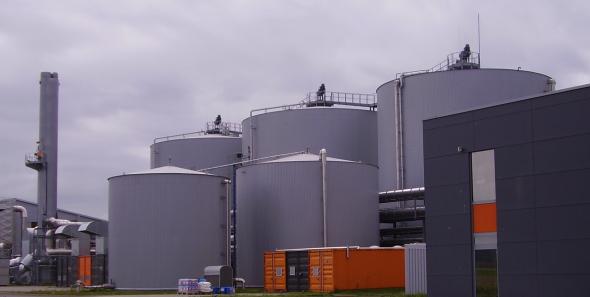 The continent has roughly 14,000 municipally operated biogas digesters, with nearly 9,000 in Germany alone. In Denmark, most food waste is incinerated for energy recovery along with other household garbage, according to Ioannis Bakas, a waste expert at the Copenhagen Resource Institute.

Elsewhere in Europe, composting is common, but anaerobic digestion is on the rise. It's growing quickly in the U.K. as well as Sweden, which last year declared a lofty goal: At least 50 percent of organic waste should be recycled by 2018 — using either composting or anaerobic digestion — and 40 percent of the energy should be recovered. As a result, said Asa Stenmarck of the Swedish Environmental Research Institute, "There is a switch toward anaerobic digestion. It is, however, hard to get the economics to work, so this is also to some extent depending on subsidies from the government."

Government assistance has a lot to do with why anaerobic digestion has taken off in Europe. But as Patrick Serfass, executive director of the American Biogas Council, points out, it’s also meant that operators haven’t necessarily had to figure out the economics. “Projects get developed that are dependent on those incentives, and they’re not forced to innovate as much as the U.S. market has been,” he said. “That sort of innovation is what helps biogas projects in the U.S. to achieve profitability and helps make the market, even though it's smaller, more nimble.”

For example, New Hampshire-based Neo Energy is developing anaerobic digestion projects specifically for food waste in Massachusetts and Rhode Island. In Central Florida, a Harvest Power facility co-digests sewage and food waste from nearby businesses, including Disney World, and extracts phosphorus from the waste to form a crystal called struvite, which is sold as a fertilizer additive.

Experts agree that anaerobic digestion is growing quickly, but not necessarily at the expense of composting. “You can't draw a box around these two and call them exclusive,” said Scott Beckner, an integrated waste management specialist at California’s Department of Resources, Recycling and Recovery. “We're seeing both increase at an even pace. Anaerobic digestion is really picking up right now. Composting facilities are figuring out new technologies to meet local needs.”

The cost of building an anaerobic digestion system ranges widely, depending on the size of the plant, the feedstock, types of end-products produced, and other variables. It’s not cheap. Last year, the Lewiston-Auburn Water Pollution Control Authority, a relatively small sewage treatment plant in Maine, finished installing a $14 million anaerobic digestion system. DC Water in the nation’s capitol, meanwhile, is spending an estimated $500 million on a new anaerobic digestion system modeled on Norwegian technology, but it also expects to recoup those costs. The utility expects to save $16 million a year in operational costs and $10 million on its electricity bill. The new Lewiston-Auburn system is expected to save the plant $600,000 a year through reduced energy costs and lower volumes of solids to dispose of.

The anaerobic digesting process is more complex technically than composting, and digesters — especially pre-existing ones — can be easier to operate when the feedstock is predictable, which residential food waste is definitely not. The bacteria that break down the organic matter during digestion also prefer a moist environment, and it's hard to control the ratio of liquids to solids in residential food waste.

“Biosolids” remain after the anaerobic digestion process, and some are used as fertilizer. But detractors of sewage sludge recycling object to that practice and to adding food scraps to co-digestion tanks. "The residuals (biosolids) from sewage treatment plants should never be used as a soil amendment” because they contain a mixture of pathogenic and industrial pollutants, said Caroline Snyder, professor emeritus of the Rochester Institute of Technology and founder and chair of Citizens for Sludge-Free Land.

Despite such concerns, the wave of innovation in food recycling and anaerobic digestion is picking up speed globally. Said Serfass, “We're seeing Europeans looking to how we're innovating and creating new products in the U.S.”

Top image of the Biogas Train Amanda near Linköping station, Sweden, by Barbarien

How Sacramento takes food waste from tables to gas tanks