Not so long ago, people who worried about pollution in their local environment had few options. Getting answers required hands-on testing by trained experts with specialized equipment, or finding and sifting through scarce, hard-to-come-by data.

Today, all of that is changing. A convergence of tech trends — inexpensive sensors, cloud computing and data analysis, and social media — is transforming environmental protection by giving people and organizations such as Environmental Defense Fund the ability to collect and analyze huge troves of data, then publish results for all to see.

We launched one of these powerful projects Wednesday.

Thanks to a partnership with Google Earth Outreach, EDF has mapped thousands of natural gas leaks beneath three American cities — Boston, Indianapolis and New York City’s borough of Staten Island. Using three of the company’s famous Street View cars equipped with special sensors, we gathered millions of data points over thousands of miles of neighborhood streets.

The maps are available here, with many more to come.

For the most part, these natural gas leaks don’t pose an immediate danger; utilities are required to monitor and repair the major ones and usually do a good job of it. But leaking gas, which is mostly methane, has a powerful effect on the global climate, packing up to 120 times the warming effect of carbon dioxide.

In fact, scientists say that methane and other short-term climate forcers account for about a third of the warming we’re experiencing today, with methane responsible for most of that. It’s urgent that we plug these leaks to reduce near-term climate impacts. 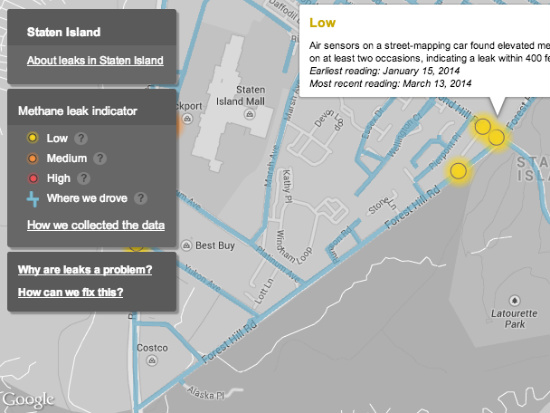 Our pilot project with Google gives citizens and local utilities data on pollution that used to be invisible. We show not just the location of thousands of leaks beneath the streets of three large American cities, but also assess how big the leaks are, giving utilities and regulators crucial information to accelerate and prioritize efforts to stop them.

Having access to this level of intelligence is something I could only dream of when I joined EDF 30 years ago.

The project — one of 16 studies coordinated by EDF to measure methane emissions across the entire natural gas system — underscores the challenge of controlling leaks from the local distribution sector, and the progress that can be made when cities work to tackle it aggressively.

Our sensors recorded just five leaks in Indianapolis, which has replaced many of its pipes in recent years. Never before has the public had access to so much transparent and usable data, and never before have we had an opportunity like this to address such an urgent, widely overlooked environmental problem head-on.

The future of environmental data

We are confident that our research will make it faster, easier and cheaper to gather and analyze data on methane leaks and other kinds of pollution. But breakthroughs like this don’t happen overnight.

Our research team spent two years working with scientists at Colorado State University to develop and test these new analytical tools. And we worked closely with a number of leading utilities to cross-check and validate their findings against real-world conditions.

Several utilities, including NationalGrid, worked directly with us to validate our findings.

We’re mapping more cities right now, while expanding our monitoring to other pollutants. We know Google Earth Outreach is interested in exploring others as well.

Google Street View covers 3,000 cities in 54 countries, so the possibilities truly are limitless.

Even more exciting is the larger trend.

Our maps are part of a powerful new era of environmental monitoring and protection. From Beijing and Fukushima to the rainforests of Brazil, technology is giving people new ways to see — and act on — pollution that is happening around them.

As former New York mayor Mike Bloomberg likes to say, you can’t manage what you don’t measure — and now people everywhere have the capability to take accurate measurements and publish them online, which applies pressure on authorities to step up their management.

If you want to nominate your city for methane mapping, go here.

This article originally appeared at EDF Voices. Top image of methane leaks in Boston via EDF and Google