Colombia's cities have the highest rate of rich-poor income inequality of all cities in Latin America. Bogotá, the capital of Colombia with a population of 7.5 million, is no different. In the late 1990s, "the quality of life in Bogotá was one of the worst in Colombia and in Latin America," Mauricio Rodriguez, Colombian ambassador to the United Kingdom, told PBS. Besides the great inequality, "Bogotá had a lack of infrastructure, many security and safety problems, and there was no optimism in relation to the future."

In 1998, Bogotá's mayor Enrique Peñalosa tried to change that. He believed that sustainable urban design could be the foundation for social justice, and decided to tackle the crippling Bogotá traffic congestion and social inequality at the same time, by implementing a sustainable transportation system in the city.

In the 1990s private companies ran all of Bogotá's 1,500 public buses. They fought for passengers, often driving on sidewalks and blocking streets so other buses couldn't pass. Traffic congestion was out of control, often taking over two hours to travel 18 miles. Some of the city's urban planners proposed building a network of elevated highways across the city. However, Peñalosa was not convinced that would solve the problem. He felt that urban development done the right way could develop a more egalitarian and sustainable city.

Into the millennium with bus rapid transit

For a fraction of the cost of the proposed elevated highways, the mayor put in what at the time was one of the world's most advanced bus rapid transit systems. The BRT system includes over 1,300 large buses that can hold up to 160 passengers that travel throughout the city, and smaller feeder buses that take care of the outlying areas.

The buses have dedicated lanes with elevated stations in the center of the roads. The floor of the bus is level with the floor of the station, making it easy for wheelchairs, the elderly and people pushing strollers to enter and exit. People pay the bus fare in the station, rather than paying the driver, another timesaving measure.

It wasn't an easy change. The prior bus system was in the hands of the mafia. It was a multibillion-dollar business, and the government was wary of the potential of crippling strikes if they were to take that business out of private hands. So the mayor invited the bus operators to be part of the system. Six private companies now run the bus fleet and ticketing system — although they have to abide by strict rules and regulations — and the city maintains and develops the necessary infrastructure.

Yet one of the most difficult parts was not the engineering of the new public transport, but the marketing. "We had to make our bus system sexy," according to Peñalosa. One thing they considered heavily was the name. Taking the bus always had been considered something for the poor. So they called the bus system TransMilenio — going from one millennium into the next. "Nobody now says, 'I'm going take the bus,'" Peñalosa said. "They say, 'I'm going to take the TransMilenio.'" 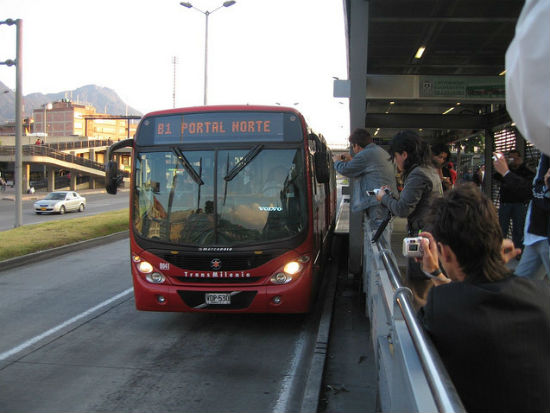 To make the public transport system accessible to a broader swath of the city's residents, TransMilenio runs free feeder buses from low-income communities at the outskirts of the city to the main TransMilenio stations, and has a uniform ticket price no matter the distance traveled, so that lower-income residents from outlying areas still can afford to ride.

The mayor also felt that bicycle paths and pedestrian zones could go a long way towards social equality (PDF), providing additional options for low-income groups as well as others who'd like to forego their cars. So he initiated the construction of more than 300 kilometers of bicycle lanes, increasing bicycle use by five times in the city. The bike paths run through both low-income and wealthy areas to promote integration, and an estimated 300,000-400,000 trips are made daily in Bogotá by bicycle.

Car-free Sundays are another Bogotá institution. Every Sunday, 74.5 miles of main highways are closed from 7 a.m. to 2 p.m. Although this was put in place in 1982, it has grown every year. "More than a million and half people come out; rich, poor, fat, skinny, old, young," Peñalosa told PBS. "This is a wonderful place for integration, it's the safest place in the city."

Mayor Peñalosa also doubled the parking fee in the city, implemented car restrictions — 40 percent of vehicles can't travel during peak hours Monday to Friday, depending on the last number on the license plate; renovated streets are more pedestrian-friendly; and one day a year the entire city (not just 74.5 miles of main highways) goes car-free. The first car-free day was Feb. 24, 2000, and was the first time in the world that the use of private vehicles was restricted across an entire city. It was so successful that the people of Bogotá voted in a referendum to annually hold a car-free day the first Thursday of every February.

The TransMilenio is also connected to bike lanes. An estimated 70 percent of TransMilenio users cycle or walk to the station. Once there, many stations have bicycle storage areas that function like coat-checks, where people can park their bikes safely and securely for free. 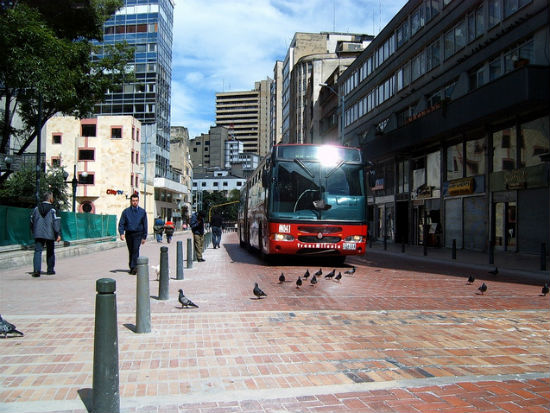 The two mayors following Peñalosa have not been as strong cycling proponents, so a group called La Ciudad Verde (Spanish) (the Green City) has taken up the cycling cause in Bogotá. The group identifies places in the city where more bike lanes are needed, and using social media bring citizens together to paint the lanes themselves. The city's authorities, instead of fining the group for vandalism, usually respond positively and offer to work with La Ciudad Verde. La Ciudad Verde also works on shifting cultural perceptions around cycling, and in March convinced some of the country's most famous soccer players and actors to use electric bikes for a day and share their experiences on social media.

Creating a different way of life

All of these changes have made a huge difference in the city's quality of life TransMilenio transports over 1.9 million passengers per day, one of the highest-capacity BRT systems (PDF) in the world (Mexico City's MetroBus carries 800,000 per day, and São Paolo, Brazil's BRT carries 60,000). Traffic fatalities are down 89 percent. The CO2e emissions have been reduced by over 60,000 tons per year. And that two-hour-plus trip to go 18 miles now takes 55 minutes. According to Peñalosa, "The way we create cities will really determine how people will live and how happy they will be." In fact, a 2012 study of the TransMilenio showed a correlated 85 percent decrease in crime, and an increase in land values and employment.

However, the success of Transmilenio is not without its drawbacks. At rush hour the buses are so crowded that people have been protesting. The phases to expand the system are lagging behind schedule causing public frustration. But despite the complaints and protests, there is no doubt that the city has been transformed.

The sustainable transportation initiatives in Bogotá did more than just relieve traffic congestion and reduce pollution. "It was a city without hope, without self-esteem," Mayor Peñalosa told PBS. "What is amazing is it really changed beyond all my expectations … because we started making a city more for people and not so much for cars. It sounds very simplistic, but the fact is that we are really trying to learn a different way of life."

Top image of Transmilenio by John Greenfield via Flickr. This article first appeared at RMI Outlet.

Cities Offer Their Own Response to Climate Change