When people think of the anti-apartheid movement, one name universally springs to mind: that of the late, great Nelson Mandela or Madiba, the South African revolutionary, philanthropist and politician. His fight began as a national issue but later came to be known and perceived as one representing global values of equity, human rights and forgiveness.

Speaking at the Global Estuaries Forum in France recently, Brice Lalonde, ambassador for climate change and special advisor on Sustainable Development to the U.N. Global Compact, called for a "Mandela for the climate movement" to rally and inspire a radical shift from individual national interests to politics and decisions favoring the planet.

In addition, Lalonde, the former French Environment Minister, called for a more holistic approach with the creation of a "planetary ambassador post" in national governments to focus on broad environmental interests of the "global commons" such as biodiversity, governance of the high seas and to deal with the impacts of climate change and its future consequences.

He indicated that climate talks to date  perhaps had been hampered by the fact that key ministers involved ultimately were required to focus on narrow national rather than global interests and that a new post with responsibility for planetary interests could be tasked with considering long-term impacts that transcended national boundaries.

Lalonde's talk came on the heels of a full day of discussion among environment experts discussing how best to manage estuaries — places where seawater and freshwater mix — and where pollution, climate change, urbanization, land reclamation, overfishing and exploitation pose major threats to their health and survival. 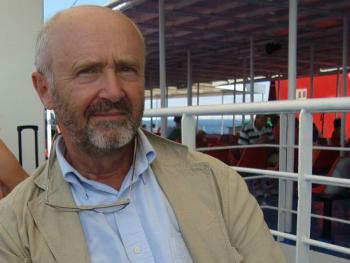 Not only are the consequences from climate change likely to be the most diverse and unpredictable, but these "in-between areas" between land and sea do not fit an easy mold to govern. Their jurisdiction is often split between agencies tasked with managing rivers and those managing coastlines, not to mention different countries or municipalities on opposite banks.

Governments similarly were urged to work together to improve the governance and management of vulnerable estuaries such as the Nile Delta, the Seine, the Saint Lawrence, Rio de la Plata, Rotterdam, the Thames — or risk undermining some of the world’s most valuable economic and biodiversity hubs.

The Great Lakes St. Lawrence Seaway System is a deep waterway extending 2,340 miles from the Atlantic Ocean to the head of the Great Lakes in the heart of North America, and extends from Montreal to mid-Lake Erie. It includes 13 Canadian and two U.S. locks. Betty Sutton, administrator of the Saint Lawrence Seaway Development Corporation, spoke to its bi-national governance, saying it had been challenging to negotiate but ultimately successful.

Edouard Philippe, mayor of Le Havre in France, said governments need to regard estuaries as places for "dialogue and cooperation" rather than borders, if they are to work together to effectively balance the economic and environmental pressures and opportunities faced by estuaries.

With France also hosting the much anticipated Paris climate conference in 2015, which will mark a decisive stage in negotiations on any future international agreement on a post-Kyoto protocol 2020 regime, Lalonde was non-committal about the outcome. He commented that all the negotiators have a mandate to do something, but it was still unclear what that contribution will be. Stating that with climate change on its way and already affecting the Earth system, he commented that the issue was so important, heads of state should be the negotiators.

A common theme emerged from the meeting — new ways of managing the planet across boundaries is essential for long-term sustainability and joined-up thinking. As Mandela said, "It always seems impossible until it's done." But in the meantime, Lalonde, for one, urges countries and businesses to move forward with strong cross-border action.

Top image of the Seine in Paris by vvoe via Shutterstock