Thirty scientific institutions from 15 countries last week released a report for the United Nations outlining how the world’s major carbon dioxide-emitting nations can slash those emissions by mid-century. The Deep Decarbonization Pathways Project aims to provide government leaders with a plan of action in advance of a UN climate summit in September and climate negotiations in Paris in late 2015. Yale Environment 360 asked Jeffrey Sachs, director of Columbia University’s Earth Institute and a key player in the decarbonization project, five questions about the initiative and the prospects for global action on the climate front.

1. Why do you believe the Deep Decarbonization Pathways Project has a chance of succeeding where other global carbon-cutting initiatives have failed?

It is COP21 of the UN Framework Convention on Climate Change that has the chance of succeeding. COP21 is the meeting in Paris in December 2015 where governments are committed to adopting a new climate agreement. There are signs that for the first time, all major emitting countries — the U.S., the European Union, China, India and others — are prepared to take real actions together. This is by no means assured, but it is possible. The Deep Decarbonization Pathways Project (PDF) can help this process by showing the way to deep decarbonization at the country level, and by emphasizing that developments in low-carbon and zero-carbon technologies should be incorporated into the COP21 agreement.

2. What practical incentives does the project offer to governments, citizens and businesses to embrace “bold” emissions reduction targets despite the economic costs?

The report charts out the depth of energy transformation that will be required, and the major pillars of that transformation. Three are most important: zero-carbon and low-carbon electricity; electrification of vehicles and the heating and cooling of buildings; and great strides in energy efficiency. In order to have these adopted at large scale, we will need three things: carbon pricing, to reflect the social cost of carbon; improved technologies through research, development and demonstration projects; and clear national pathways giving regulatory and policy guidance to private investors. 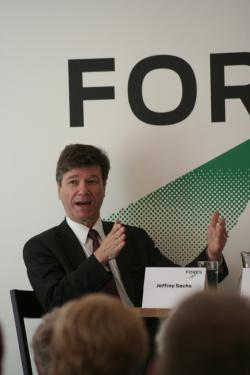 3. What is the scale of the research and development effort needed to develop game-changing, low-carbon energy technologies, and how will the costs of these efforts be paid for?

Currently the U.S. government spends around $30 billion per year on biomedical research, but only around $3 billion on low-carbon energy. The world as a whole should increase the RD&D on low-carbon energy systems by roughly one-order of magnitude (that is, a factor of 10), to perhaps $100 billion per year, shared by the public and private sectors. These are very rough estimates. Next year’s DDPP report will consider this issue in quantitative and qualitative detail.

4. What are the main guiding principles in the developing world of simultaneously lifting people out of poverty while reducing the carbon intensity of these emerging economies?

We must distinguish between groups of countries. The poorest countries play almost no role in energy-related CO2 emissions. They simply need modern energy, especially electricity and clean cooking fuels. The main goal of the global community should be to support these impoverished countries to achieve modern energy for all. The middle-income countries, by contrast, have large and growing energy sectors that often contribute heavily to global CO2 emissions (notably China). These countries will need to define and implement national deep decarbonization pathways that are specific to their resource base (wind, solar, hydro and geothermal energy), economic structure, public attitudes (such as to nuclear power) and economic prospects. The high-income countries should support these middle-income countries mainly through cooperative efforts on the research, development, demonstration and diffusion of low-carbon technologies.

5. In light of disappointing climate negotiations in the past, why do you think the global community will be more inclined to agree to serious reductions in CO2 emissions at talks that culminate in Paris next year?

Several factors give cautious optimism for agreement next year. The first, ironically, is that the evidence of global climate disruption is becoming far more evident and frightening around the world. Second, the U.S. and China are much more disposed to move forward on a cooperative and meaningful basis than was true just a few years ago. Third, low-carbon technologies (photovoltaics, electric vehicles, smart grids) continue to improve. Fourth, the concepts of the carbon budget (consistent with the 2-degree Celsius limit on temperature increase) and long-term transformation pathways are much more widely understood today than just a few years ago.

None of this suggests that a solid agreement is assured. There are still huge obstacles to overcome, including powerful vested interests, such as within the global oil industry; the unwillingness of the U.S. and some other high-income countries to commit to a clear and ambitious program of climate financing for the poorer countries; the lack of global trust; and the undue short-termism of politics and finance. Some politicians will want an agreement of any kind, for a successful “photo-op.” This will be little better than no agreement. It’s our responsibility to work overtime until December 2015 to ensure that we have not only an agreement, but also an agreement that supports the globally agreed limit of 2-degrees C.

Top illustration of a green factory by  javi.ruiz via Shutterstock.

Why energy efficiency is the cheapest path to climate action