Why American Eagle, H&M, Nike and Puma want your hand-me-downs

Why American Eagle, H&M, Nike and Puma want your hand-me-downs

There's only so far that community or family hand-me-downs can go to address the booming issue of textile waste, so I:Collect (aka I:CO) created a global collection network to keep discarded clothing and shoes out of landfills.

The five-year-old organization, which pioneered its program in Europe and brought it to the United States three years ago, already has forged several high-profile partnerships with the likes of H&M, PUMA, Levi Strauss & Co. and American Eagle Outfitters, which is rolling out collections in all 823 of its stores in the United States and Canada. I:CO is also involved with the zero waste initiative in San Francisco. 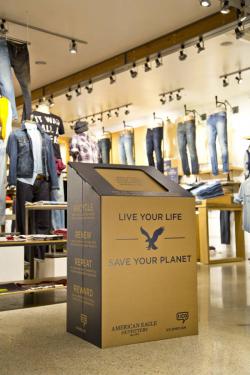 From the consumer perspective, I:CO's approach is simple. In concert with trade partners, it places collection boxes in visible locations such as stores or building lobbies where people can place unwanted apparel or shoes, no matter what condition it is in.

"Consumers want to do the right thing, but they don't know how to do it," said Jennifer Gilbert, chief marketing officer for I:CO, which has its U.S. base in Los Angeles.

Helga Ying, vice president of external engagement and social responsibility for American Eagle Outfitters, said the retailer decided to broaden its experiment in textile collection after a successful internal pilot. American Eagle sees the program as a great tool for educating people about the big impact of clothing and shoes on the global waste stream, while encouraging recycling and reuse at the point of sale when they're thinking about buying something new.

"This is not just about the clothes that are worn out; it's about what you might not want anymore," Ying said. "You can bring in pretty much anything, and I:CO can find a way to repurpose it or redistribute it to somewhere where it can be used."

Any customer who participates in the program receives $5 off the day of their dropoff toward a purchase of American Eagle jeans. Proceeds are being donated to the Student Conservation Association, one of the retailer's national charity partners.

The implications of cleaning out your closet

Some 22.3 billion pounds of cast-off clothing and footwear find their way into U.S. landfills on an annual basis. There, apparel is often incinerated, creating about seven pounds of CO2, according to figures from the Environmental Protection Agency. (4 billion pounds more goes to charities.)

I:CO figures that about 95 percent of those items can be reused in some way, Gilbert said. Part of SOEX Group, based in Switzerland, I:CO has collection points all over the world: its 2,000 employees process around 700 tons of used items every day in more than 90 countries. From the collection points, items are transported to sorting locations. More than 365 categories are considered during this phase, most of which is done by hand, Gilbert said. Whatever is re-wearable — about 60 percent of items fall into this bucket — gets passed along to organizations that can redistribute them to people in need. The rest is sent along to be prepared for repurposing. Some is shredded, for example, to be used as insulation or carpet padding for the automotive or construction industries, she said. 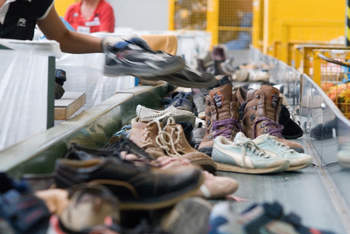 Some of I:CO's partners are developing ways to reuse shredded materials within their own manufacturing and production processes. For example, H&M has launched a clothing line composed of 20 percent post-consumer denim fibers.

"It's of course important that these companies are keeping clothing out of landfills, but they also actually need to think about doing something about it," Gilbert said. "We believe in a closed-loop approach. When [retailers and apparel makers] create clothing and shoes, they need to make them in a way to prepare them for the next application."

Depending on the arrangement, I:CO's partners are paid by the pound for the feedstock that they're collecting and contributing to the process. 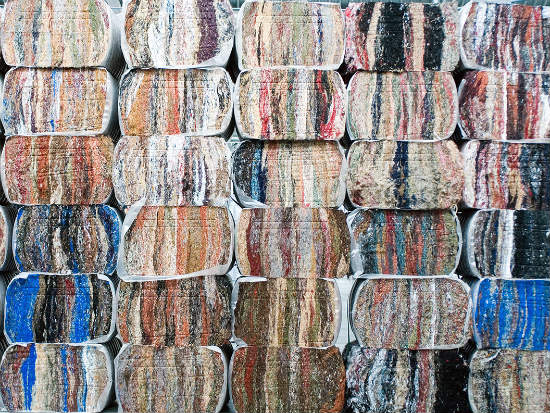 The next big step for the organization is to sign more cities, such as San Francisco, that can provide support for collections at the municipal level.

"Retailers can take it so far, but really getting into a city. That sort of infrastructure will help us get there faster," Gilbert said.

All images of apparel recycling via I:CO