On any given day in the United States, about half a million people are without power for two or more hours. Once hailed by the National Academy of Engineering as the most influential engineering innovation of the 20th century, the North American power grid operates with technology primarily from the 1960s and ’70s.

In recent decades the number and frequency of weather-related major outages have increased. Between the 1950s and ’80s, outages increased from two to five each year; from 2008 to 2012, outages increased to between 70 and 130 per year. Meanwhile, electricity needs are growing fast. Twitter alone adds more than 2,500 megawatt-hours of demand globally per year. It is projected that the world’s electricity supply will need to triple by 2050 to keep up with demand. That will require a significant commitment.

In the past decade, electricity risk has increased due to aging infrastructure, lack of investment and policies conducive to modernization and the threat posed by terrorism and climate change. As the climate changes, the variability of weather events has increased. We will see more extreme events, and with greater frequency. Hurricane Sandy appears to be an example of this.

In the aftermath of Sandy, questions were raised about power restoration in relation to extreme weather and climate change. It needs to be understood that a massive, physical assault on Hurricane Sandy’s scale is bound to overwhelm the power infrastructure, at least temporarily. No amount of money or technology can guarantee uninterrupted electric service under such circumstances.

It’s also important to remember that the U.S. is just beginning to adapt to a wider spectrum of risk. Cost-effective investments to reinforce the grid and support resilience will vary by region, by utility, by the legacy equipment involved and even by the function and location of equipment within a utility’s service territory.

The electrical grid must change drastically. We need a smarter grid that effectively and securely will meet demands of a pervasively digital society in the face of climate change and other extreme events while ensuring a high quality of life and fueling economic growth. Such a grid would provide sufficient transmission capacity to link new natural gas generating plants, on-shore or offshore wind farms, solar plants and other renewables to customers. It also would function as a self-healing system, using digital components and real-time communications technologies to monitor its electrical characteristics at all times and constantly tune itself so that it operates at an optimum state, anticipates problems and is able to rapidly isolate parts of the network that experience failure from the rest of the system to avoid the spread of disruption and enable more rapid restoration.

To transform our current infrastructure into a self-healing smart grid, several technologies must be deployed and integrated. The ideal smart grid system consists of microgrids — small, mostly self-sufficient power systems — and a stronger, smarter high-voltage power grid, which serves as the backbone to the overall system and makes it possible to integrate substantially increased amounts of wind and renewable resources. With a stronger and smart grid, 40 percent of our electricity in the U.S. can come from wind by 2030, which will substitute in part for fossil fuels currently used for electricity and transportation.

Upgrading the grid infrastructure for self-healing capabilities requires replacing traditional analog technologies with digital components, software processors and power electronics technologies. These must be installed throughout a system so that it can be digitally controlled, the key ingredient to a grid that is self-monitoring and self-healing. 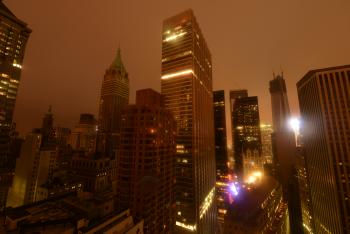 Much of the technology and systems thinking behind self-healing power grids comes from the military aviation sector, where I worked for 14 years on damage-adaptive flight systems for F-15 aircraft, optimizing logistics and studying the survival of squadrons and mission effectiveness. In January 1998, when I joined the Electric Power Research Institute, I helped bring these concepts to electricity power systems and other critical infrastructure networks, including energy, water, telecommunications and finance. Following the Sept. 11, 2001, terrorist attacks, resilience and security has become even more important.

The cost of a smarter grid would depend on how much instrumentation you actually put in, such as the communications backbone, enhanced security and increased resilience. The total price tag ranges around $340 billion to $480 billion, which over a 20-year period would be around $20 billion to $25 billion per year. But right off the bat, the benefits are $70 billion per year in increased efficiency and reduced costs from outages, and on a year with lots of hurricanes, ice storms and other disturbances, that benefit goes even further. Currently, outages from all sources cost the U.S. economy $80 billion to $188 billion annually. A smarter grid would reduce costs of outages by about $49 billion per year, and reduce CO2 emissions by 12 to 18 percent by 2030. In addition, it would increase system efficiency by over 4 percent — $20.4 billion more per year.

The costs cover a wide variety of enhancements to bring the power delivery system to the performance levels required for a smart grid. They include the infrastructure to integrate distributed energy resources and achieve full customer connectivity, but don’t include the cost of generation, the cost of transmission expansion to add renewables and to meet load growth, or the customers’ costs for smart-grid-ready appliances and devices. Despite the costs of implementation, investing in the grid would pay for itself, to a great extent. With the actual investment, for every dollar, the return is about $2.80 to $6 to the broader economy. And this figure is very conservative.

But this is also about 1) increased cyber/IT security and overall energy security, with security built into the design as part of a layered defense system architecture, and 2) job creation and economic benefits. Indeed, in my view, our 21st century digital economy depends on our making these investments, regardless of the prognosis for more extreme weather to come as our climate changes.

As evidence for the economic argument, consider the 2009 American Recovery and Reinvestment Act government stimulus plan funding and matching support from utilities and the private sector in the Smart Grid Investment Grant and Smart Grid Demonstration Project programs. As of March 2012, the total invested value of $2.96 billion to support smart grid projects generated at least $6.8 billion in total economic output. Overall, investments supported about 47,000 full-time equivalent jobs. For every $1 million of direct spending, the GDP increased by $2.5 million to $2.6 million.

We’ve wasted 15 years arguing about the roles of the public and private sectors while our global competitors adapt and innovate. We need to renew public-private partnerships, cut red tape and reduce the cloud of uncertainty on the return on investment of modernizing infrastructure. When the nation has made such strategic commitments in the past, the payoffs have been huge. Think of the interstate highway system, the lunar landing project and the Internet.

Meeting each challenge has produced world-leading economic growth by enabling commerce, technology development and a mix of the two. In the process we’ve developed a highly trained, adaptive workforce. Now, we must decide whether to build electric power and energy infrastructures that support a 21st century’s digital society, or be left behind as a 20th century industrial relic.

Top image of power station with lightning by egd via Shutterstock.