Native energy: From fossil fuels below to renewables above

Native energy: From fossil fuels below to renewables above

Many Native American reservations sit on large quantities of coal. Others are rich with oil deposits. In fact, much of the development that occurred in the American West would not have been possible without the energy and mineral resources that have been developed on tribal lands.

Some have seen those fossil fuels as an economic resource. For example, CJ Stewart, a senator of the Crow Nation, told the Huffington Post that his tribe desperately needs to develop its coal reserves to improve its economic fortunes and lift its people out of poverty. "We rely on coal just as [other tribes] on salmon," Stewart said. "All tribes share one common enemy, and that enemy is poverty."

Yet tribes often are left with polluted water, dirty air and health problems, which is why some are turning from fossil fuel development of their lands below toward a clean energy future based on abundant renewables above.

Coal has a long history on Native American reservations. Fifty reservations are within 20 miles of coal plants over a half-century old, affecting the health and well-being of 48 tribes, one of which is the Moapa Band of Paiutes in Southern Nevada.

In addition, many reservations sit in the path of the Pacific Northwest coal-export superhighway, expected to transport up to 100 million metric tons of coal per year to be loaded onto ships destined for Asia. Many tribes along the highway will be affected by the coal dust blowing off the trains, which they claim will hurt the salmon, a key food resource on which many tribes depend.

The Moapa, for their part, have lived next to a coal plant for over 45 years, which they claim has caused numerous health problems, including high asthma rates in the community. The plant finally was shut down in April 2012, and the Moapa, in partnership with First Solar and through a 25-year power purchase agreement with the Los Angeles Department of Water and Power, recently completed a 250-megawatt PV plant that will supply lease income to the tribe and power to about 118,000 homes in Los Angeles.

Hydraulic fracturing is a contentious subject for tribal lands as well. An estimated 20 percent (PDF) of the nation's known oil and gas reserves lie on tribal lands. And 90 percent of wells that are drilled on federal and Indian lands use fracking, causing great concern for many tribes.

The Fort Berthold Reservation in North Dakota, home to the Mandan, Hidatsa and Arikara nations known as the Three Affiliated Tribes, sits right on the oil-rich Bakken Formation and has more than 850 oil wells. Activists fighting the fracking say oil production is starting to displace the tribal culture based around agriculture and livestock grazing. "The relationship to the land is being destroyed," Marilyn Hudson, head of the Three Affiliated Tribes Museum, told EcoWatch. "We are looking at the death of our tribal society as we knew it."

The Turtle Mountain band of Chippewa in North Dakota and the Haudenosaunee of New York have both banned fracking on their land, and last year 40 Native Americans were arrested in New Brunswick, Canada, protesting fracking on native lands. In this way, Native American reservations have become a microcosm of a broader energy debate: Do we invest further in fracking to expand domestic fossil fuel production or make a bold, decisive move to reinvent fire and transition to energy efficiency and clean, abundant renewable resources?

However, for every tribe fighting fossil fuel development on or near their land, others embrace the energy development. For example, the Three Affiliated Tribes' official position on fracking is that it benefits the community. According to the Bureau of Indian Affairs, the reservation received more than $117 million in royalties in 2011. Tribal Chairman Tex Hall says oil will bring the reservation "sovereignty by the barrel." But that sovereignty comes at a hefty cost — environmental, health, ecological and cultural.

Some are beginning to realize those costs might not be worth it, and that there are other ways to embrace energy development and economic betterment through the opportunities renewables present. "Our entire tribal culture and existence is based on the principle that the land equals the people, us; destroy one and you destroy the other," Three Affiliated Tribal member Corey Sanders wrote to his tribal representative. "Yes, it's true our tribe needs money, and it's nice to get a royalty check every month, but what are we giving up to get it?"

Can renewable energy projects be a better path to help lift Native Americans out of poverty? The Rosebud Sioux probably would say yes. In 2003 the South Dakota tribe installed a 750 kW wind turbine, making it the first utility-scale commercial wind turbine in the lower 48 states wholly owned and operated by a Native American tribe. The wind turbine earns the tribe $2,500 to $4,000 (PDF) each month. That doesn't sound like much, but it just scratches the very surface of the renewable energy potential on tribal lands. 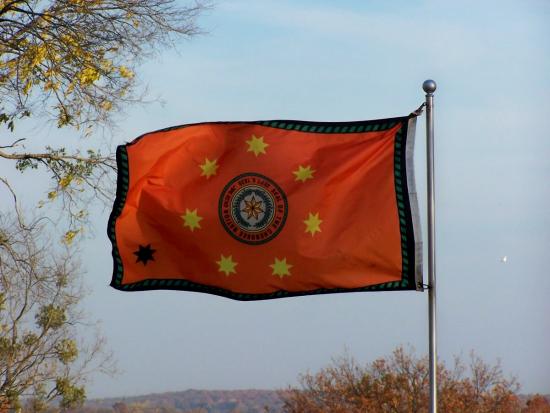 Now the Rosebud Sioux are joining forces with six other South Dakota Sioux tribes to form a single tribal utility authority and install 1 gigawatt of wind power on their land. Because the project will be financed by bonds instead of private equity, the tribes will own the turbines and realize the full benefits of energy sales to customers outside the reservations.

A statement from the seven tribes noted, "All of our Tribes suffer from an unacceptable level of poverty and joblessness. ... The development of utility-scale wind power, supplemented with hydropower, will enable us to provide for the well being of our people by generating sustainable economic and community development, jobs, and training opportunities in a way that is consistent with our cherished beliefs, traditional ways of life, and rich cultural traditions."

Likewise, the Cherokee Nation in Oklahoma, along with four other tribes, is constructing a 90-turbine 153-megawatt wind farm estimated to generate $16 million in revenue for the tribes over the next 20 years.

Native Americans hold 10 percent of the nation's renewable energy potential. It's estimated that solar PV could produce 9,275 million MWh of electricity per year on tribal lands — twice the nation's requirement. And that wind power on tribal lands could power over 50 million homes (PDF). Renewable energy projects can tap into this potential, offering an economic boon to tribes, says a U.S. Department of Energy report, and still "complements Native Americans' respect for the environment and their concern for future generations." Honor the Earth, a Native-led environmental organization declares in its Fracking Fort Berthold Fact Sheet:

"Our tribal government has an obligation to protect Mother Earth from any pollutants which may cause harm to its citizens, land, water, and air. … North Dakota has the sixth largest wind resource potential in the United Sates, totaling 770,000 megawatts — which is more than ALL fossil fuel powered plants in the United States combined. We need to invest in less harmful development strategies like solar and wind, which can provide real jobs to our community members."

Top image of wind turbines in a snowy field by Wan Norazalini Wan Hassan via Shutterstock. This article first appeared at RMI Outlet.

How clean tech is shining on reservations