It’s a question for the ages — or, at least, the age of sustainability: If sustainable business practices create profits and shareholder value, why aren’t mainstream investors paying attention?

Some new research by McKinsey & Company has uncovered part of the answer. The short version: Investors don’t have the data they need, or understand how sustainability connects to creating shareholder value. And companies don’t know how to tell a story that’s relevant to Wall Street.

What we have here is a multi-trillion-dollar failure to communicate.

It’s not that investors aren’t paying attention. For example, the Investor Network on Climate Risk, a project of the nonprofit group Ceres, represents institutional investors with more than $11 trillion in assets “committed to addressing the risks and seizing the opportunities resulting from climate change and other sustainability challenges.”

But such commitments don’t always translate into action — at least not enough dollars to move markets. So, what’s the problem?

Sheila Bonini and Steven Swartz set out to find out. Bonini is a senior expert in McKinsey’s sustainability and resource productivity practice; Swartz is a principal in McKinsey’s Southern California office. Their just-published article, “Profits with purpose: How organizing for sustainability can benefit the bottom line” (download), looks at the link between sustainability and shareholder value, and what it takes to connect the two.

Simply put, it’s a two-way street, with both companies and investors needing to do their part.

“We've seen in our client work that sustainability can drive significant bottom-line impact, but we felt like there's a disconnect,” Bonini told me recently. “Why isn't the market asking about this? Most companies say that nobody asks them. So we decided to talk to investors to see why aren't they thinking about this.” 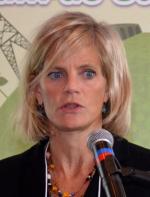 Investors, concluded Bonini, “are beginning to figure this out.” Gradually, they are moving from using environmental, social and governance (ESG) data as an exclusionary tool — that is, to screen out laggard companies — to incorporating it as a tool for identifying leaders. One helping factor is the emergence of readily available ESG data from Bloomberg, MSCI and Thompson Reuters, putting company information at investors’ fingertips.

And at least some investors are figuring out how to use this data, she said. “There are investors who are trying to pick winners based on outpeformance, not just on exclusionary screens. They view these as better companies because they do sustainability well. From what we've seen, we think that is a winning strategy.”

She points to Osmosis Investment Management as an example of the new breed of sustainability-savvy investor. Its investment thesis stated, “The manner in which companies address the challenges and risks of constraint with respect to their inputs is vital to their competitiveness, their prosperity and ultimately to their survival.”

According to Bonini, Osmosis “has been outperforming for the past nine years, just by picking the most efficient by sector.” She said she replicated its methodology and came to a similar result.

She concluded: “We’re at the beginning of a potential tipping point because we have the data and we have some investors who are using it beyond being exclusionary. You eventually get to a world where companies get asked, ‘What are you doing on sustainability?’ Today, investors don’t ask them.”

Stakeholders, maybe, but not shareholders

Even when they are asked, companies don’t know how to respond, said Bonini. And therein lies her most recent research, resulting from interviews conducted with 45 companies about how they capture and communicate the value of sustainability.

She continued: “Some of the really good companies are much better today at understanding the financial value of what they're doing and communicating it internally, and that's a big driver of their ability to be successful, because they can then get the internal buy-in. They can get the internal resources to actually invest in the right things.”

However, she said, “I think we're still a little bit stuck on that second question of, now we have the data, what do we do with it and how do we plug it into the model?” 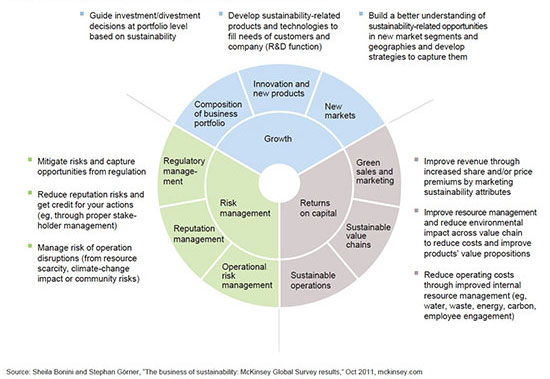 The top reason that respondents gave for their companies’ failure to capture the full value of sustainability is the lack of incentives to do so, whether positive or negative. According to the U.N. Global Compact, only 1 in 12 companies links executive remuneration to sustainability performance; 1 in 7 rewards suppliers for good sustainability performance. Among the executives we surveyed, 38 percent named lack of incentives and 37 percent named short-term earnings pressure for poor results; about a third said the lack of key performance indicators and not enough people being held accountable were problems.

Such data corroborates with other research, such as a 2014 survey of institutional investors by EY (download PDF), which concluded that nearly nine in 10 institutional investors say that non-financial performance information plays “a pivotal role” (albeit not necessarily frequently — “at least once in their decision-making in the last 12 months,” was the bar EY set). Among those that never consider ESG information in their decisionmaking process, the main reason for rejecting it was that they felt it was not material.

It was evident that investors still feel that reporting is often insufficient to meet their needs. Investors said they had a lack of information to understand what issues could materially impact returns for shareholders; that they often failed to be able to compare performance, even among peer organizations; and that they were often unable to draw the connections between non-financial and financial performance.

Nearly a third (32 percent) of investors told EY they relied on their own judgment of environmental and social data when determining the impact of such factors on value creation and risk.

Yet another recent study, this one from PwC, found investors expressing a high level of dissatisfaction with the sustainability-related information being provided by companies. Europe represented the only region where investors are more satisfied than dissatisfied with the current level of disclosure.

For all of the labor that goes into corporate sustainability reports, it seems that the finished documents may communicate leadership to stakeholders, but not to shareholders.

In their research, Bonini and Swartz identified several key building blocks used by companies that are successful in communicating the business value of sustainability, both internally and externally. They found that these companies:

That second bullet is worth calling out. Companies are renowned for offering up exhaustive lists of sustainability-related goals, initiatives, accomplishments and recognition. In many cases such lists are overwhelming, whether you’re a journalist, investor, activist, employee or customer. Bonini sampled Fortune 500 sustainability reports, looking at how many strategic focus areas they had. “I think we saw an average of about 10, and it was not unusual for companies to have as many as 30.”

That’s simply too many, she said. “If I'm trying to communicate to my organization or externally what I stand for, and I have 10 to 30 different and strategic themes, the likelihood that I'm going to get through is very low. We found that the companies that focused on a few things where they were leading — about three to five core strategic themes — were much more successful” in their communications.

A compelling and measurable story

Focusing also will help with that last bullet — clearly communicating the financial benefits of sustainability inside the company itself.

“You can talk about good management, but even if you see good management in a company overall it sometimes is not applied to the sustainability area,” said Bonini. “What we mean is that when you take a goal and you cascade it down into the business, you ensure that key business leaders are accountable and you are involving a broad leadership coalition who each have their own goals and metrics, and they're then passing it down into their organization.”

Moreover, she said, that also overcomes the obstacles created by that frozen tundra inside so many companies: middle management. “For many of the firms we work with, there's often top leadership buy in and a lot of energy and enthusiasm at the bottom. But there's often a disconnect in the middle. If you don’t put in place the systems to cascade your goals down into the business and get to those managers in the middle, they often will have other priorities and other objectives, and it will be very hard for them to prioritize sustainability and drive it in their business. They're busy with their budget and their bottom lines, which are often short term.”

And that brings us back to investors — and the failure to communicate. Clearly, a company where key personnel are focused and rewarded on short-term goals and metrics will get only so far in embedding sustainability in a way that is meaningful to investors. If a company can’t tell a compelling and measurable story to itself about why sustainability builds business value, it won’t be able to tell it to investors, or anyone else.

But the bigger problem is a lack of standard metrics that are meaningful to Wall Street. Perhaps groups such as the Sustainability Accounting Standards Board, which is developing sector-specific materiality metrics, and the Global Reporting Initiative, whose latest corporate sustainability reporting standard has an increased focus on materiality issues.

But those initiatives aren’t likely to solve the communications problems by themselves. The solutions will take work on everyone’s part.

“Most investors still don’t understand what's inside the black box, what companies are doing that enables them to drive value,” said Bonini. “And companies still need to diagnose themselves and figure out what pieces of this they're doing right, and what pieces they're missing.

“There's still work to be done to close that gap between where investors are and where companies are, and to getting to the point where investors, in their conversations with these companies, start to ask the right questions about sustainability.”

Sheila Bonini and the future of The Sustainability Consortium