Thankfully, the taps are back on in Toledo.

It’s a stunning situation: a major American city perched on the shores of one of the world’s biggest sources of fresh water deprived of clean drinking water due to pollution, failing infrastructure and climate change. All preventable issues.

After a three-day “no drink” ban on water from Lake Erie, folks in northwestern Ohio and nearby communities in Michigan can drink the water again. But it shines a bright national spotlight on the growing issue of Lake Erie’s water quality that has been vexing to Ohioans and Michiganders for some time. And folks in the Buckeye State have to recognize that Ohio unfortunately has moved down a road that could make the issue more frequent.

The sources of the algae bloom are multifaceted. They include an array of water pollution sources (see the suite of blogs posted by NRDC’s Midwest Program staff, including Karen Hobbs and Rob Moore). And it is clear that worsening climate change impacts will continue to exacerbate the issue: more violent storms flush ever-more fertilizer-laden runoff into the lake, while its shallow waters are warmed, making it more susceptible to the algae blooms at the heart of Toledo’s water woes.

If we allow climate change to advance, we will see more and more of this type of situation. This isn’t my assertion — it follows research from the Ohio State University. In a prescient report released just last month, OSU predicted that the projected increase in precipitation and the associated runoff that are occurring more frequently because of climate change likely would lead to a larger-than-average bloom of harmful blue-green algae in Lake Erie this summer. Unfortunately, nobody forsaw that these impacts would be quite so damaging to Toledo’s half-a-million residents.

The issue in Lake Erie isn’t surprising or new; after all, the algae blooms could be seen from space covering half the lake a couple years ago. 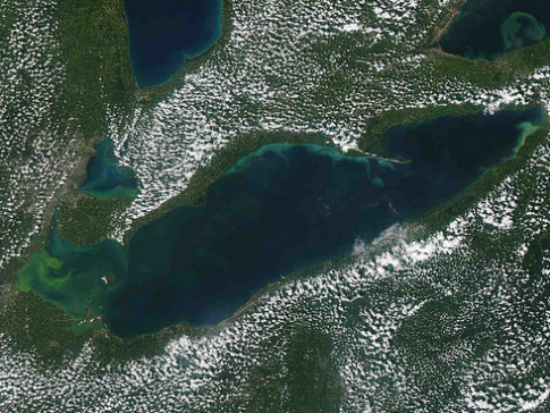 Just last summer, The New York Times declared that “Lake Erie is sick,” noting that climate change — in addition to agricultural runoff — is a major contributor of the toxic blooms that become more widespread and start occurring earlier every year. Longer storm seasons and more severe storms are contributing to an excessive amount of phosphorus in the lake, systems that the National Center for Water Quality Research notes have increased by 13 percent since 1940.

But what is surprising is how aggressively the state of Ohio has run headlong in the opposite direction from policies that would help make sure the experience in Toledo this weekend remain isolated, rather than the norm.

Toledo’s troubles come the same week that Ohio joined a suit pushing against the EPA’s historic Clean Power Plan, designed to slash carbon emissions from our nation's power fleet. And it would seem that the state is working overtime to undercut any tools that would help to mitigate the problem, having just passed a law that freezes Ohio’s energy efficiency and renewable energy policies for the next two years.

Two months into the release of the draft Clean Power Plan, it is well-known that these clean energy policies are an important part of the calculus as the state devises its plan to cut carbon and start to tackle the root cause of climate change. The unfortunate events in Toledo over the last few days underscore what was already clear — that Ohio's recent policy decisions are woefully shortsighted.

The administration of Gov. John Kasich, R.-Ohio, has done some hugely important things to protect the Great Lakes in recent years, and Ohioans have benefitted. But Ohio now has a challenge before it — to take the harrowing experiences in Glass City this week and look at this situation through a new lens that will direct the state down a path that brings jobs and stability while protecting public health and the environment.

Toledo, a town where solar energy firms proliferate, should illustrate the way forward for Ohio.

Why Americans need to ante up for water

What’s the value of a clean beach? Here’s how economists do the numbers