Conservation organizations long have sought to protect pandas, polar bears and pelicans, but the welfare of farm animals largely has been left to activist animal-welfare groups such as the Humane Society of the United States, which calls itself “the nation’s largest and most effective animal protection organization.” For the past 10 years, the organization has been headed by politically savvy Wayne Pacelle, who greatly has increased its visibility and influence. Under his leadership, the society successfully has lobbied to curb what it calls the worst excesses of “factory farms,” notably the use of gestation grates to confine pigs.

In an interview with Yale Environment 360 contributor Marc Gunther, Pacelle talked about how treatment of farm animals is linked to greenhouse gas emissions, why his group is promoting “meatless Mondays” and why consumers should be willing to pay more for products from animals that are sustainably raised.

“Opposition to animal cruelty has become a universal value,” he said. “If that opposition has any meaning, it must be applied to animals in agriculture.”

Yale Environment 360: Just what is the Humane Society of the United States trying to accomplish?

Wayne Pacelle: Our mission statement is, “Celebrating animals, confronting cruelty.” We are the No. 1 direct care organization in the United States for animals, but we’re also the biggest advocate for animals. And that leads us into many different domains of human interactions with animals, whether agriculture or wildlife, animal testing and research, equine protection and companion animals.

e360: Let’s focus on animal agriculture and its environmental impact. How do the goals of the animal welfare movement align with environmentalism?

Pacelle: Animal agriculture has an enormous global impact. There are about 70 billion terrestrial animals raised for food every year, and many of those animals are fed crops as a way of growing the animals. That means that a tremendous percentage of the corn and soybeans that we grow are fed to animals to inefficiently convert that plant matter to animal protein. We are using an enormous amount of land to raise feed crops for animals, and we have all the problems associated with that — pesticides and herbicide applications, erosion of topsoil. We have other issues related to grazing of cattle on our Western lands and the destruction of riparian areas; massive predator control in order to make public lands safe for grazing cattle and sheep.

The United Nations Food and Agriculture Organization says that animal agriculture is responsible for 18 percent of greenhouse gas emissions, including some of the most powerful greenhouse gases such as methane. That’s a concern of the Humane Society along with the animal cruelty issues associated with industrial confinement of animals on factory farms.

e360: You’ve had your biggest success around the issue of pigs and gestation crates. Your organization reports that has helped pass nine state laws banning gestation crates and have moved more than 60 of the world’s largest food companies — including McDonald’s, Costco and Oscar Mayer — to announce plans to eliminate these crates from their supply chains. How did you become involved in this issue?

Pacelle: Opposition to animal cruelty has become a universal value. And if that opposition has any meaning, it must be applied to the use of animals in agriculture. Yet in the last 50 years we’ve seen this radical transformation in animal agriculture, where animals who were once almost exclusively out on pasture, and could act and behave like animals, have been moved into large windowless buildings, and within those buildings, they’re often times confined in cages or crates barely larger than their bodies. That is a moral problem, when animals are so severely confined that they are effectively immobilized. If we’re talking about animal welfare, a basic tenet is to allow animals built to move to, in fact, move.

We have convinced almost every major retailer in the United States that this is an unacceptable way of raising animals, and they 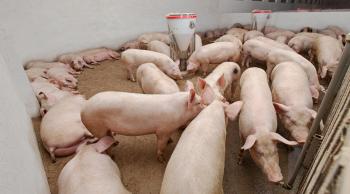 are shifting their procurement strategies to reflect their new policies. And when it comes to the big producers — Smithfield, Cargill, Tyson — we’ve made similar arguments. Fortunately, these companies are now changing for the better, and we’re excited about this new attitude by consumers of connecting their food choices to on-the-ground agricultural practices.

e360: This is a pretty radical change in the way pigs are raised. What will the environmental impact be?

Pacelle: Two things. No. 1, when you concentrate so many animals on these factory farms, you accentuate the problem. You concentrate their waste, which becomes toxic at this concentration and in this volume. So by having other methods of production, you can mitigate some of the adverse effects of the manure that flows from the farms.

Second, we cannot humanely and sustainably raised 9 billion animals in the United States. And we’re asking consumers, if they care about animals and the environment, to eat a smaller amount of animal products. Even participating in meatless Mondays, where you abstain from eating meat one day a week, is a great contribution to animal welfare and environmental protection. If we can prevent 2 billion animals from being raised for food, we would save enormous amounts of energy, we would not need to raise as many crops for feed, and we would meaningfully reduce our greenhouse gas emissions from animal agriculture. So, a small dietary modification that hardly requires any sacrifice can do more than everyone switching to hybrid vehicles in the United States.

e360: Now you’re working on what are called battery cages for hens. What are the implications there?

Pacelle: A big concern of ours has been these extreme confinement systems: veal crates for veal cows, gestation crates for breeding sows and battery cages for laying hens. Arguably, the worst of these practices are the extreme confinement situations are these cages for the laying hens, where six or eight or 10 birds are jammed into a cage and they’re basically living shoulder to shoulder for a year and a half. So we’re essentially asking consumers to purchase cage-free eggs as a means of shifting the market, and supporting farmers who are raising the animals in more extensive systems. You pay a little bit more for meat that comes from animals who are raised well and sustainably. That’s a much better outcome for our society — it helps rural communities, it helps the environment and it helps animals.

e360: So you’re not trying to end animal agriculture.

Pacelle: Absolutely not. We are an organization that embraces humane and sustainable farmers. The vast percentage of our members eat meat, drink milk and consume eggs. But most of them want to see that done more humanely.

e360: You’ve also invested in some plant-based protein alternatives, including the start-up company Beyond Meat.

Pacelle: Yes. We have investments, and more and more we’re putting some of those dollars into companies that are a part of the emerging humane economy. We think corporations have a big role to play in solving problems related to animal cruelty. There’s been great innovation in this field of plant-based proteins, where you have food products that have equivalent or superior protein value to animal products, but they don’t have the animal welfare or environmental costs that come from those animal products. Because they’re plant-based products, you’re using the plants directly rather than feeding animals who indirectly use that plant matter to create protein. We think this is a critical step for human health, and for responsible stewardship of our planet’s resources. Consumers get good, healthy, protein-rich products that taste and look very similar to the animal proteins that they once consumed.

e360: Any others besides Beyond Meat?

Pacelle: We’ve also invested in an entirely plant-based cuisine at Veggie Grill, which is a fast-food company that only offers vegan products. In the future we could be supporting humane and sustainable agriculture to provide an alternative to this industrial model of production that is so harmful to animals and our environment.

e360: What about wildlife and habitat protection?

Pacelle: Well, the biggest use of animals is, No. 1, animal agriculture. The other big impact is our human interaction with wildlife. Billions of animals are killed with habitat destruction, wildlife trade, trophy killing, trapping, the effects of road building, bush meat killing, etc. So we have programs in all of these areas. Species loss is a tremendously important global concern, and we’re fighting it on a number of fronts, whether it is the ivory trade, the rhino horn trade or the trade in turtle shells, or trying to protect open space and wilderness areas.

Pacelle: We work in four areas: public policy and enforcement, with corporations to incorporate animal protection as a element of a broader corporate social responsibility agenda, education and awareness, and direct care and response. We’ve got a wildlife response unit — so, for instance, in Florida when there’s a development project, we often go in, in advance, with the cooperation of the commercial developer, and dig out threatened gopher tortoises. Last year we dug out thousands of them and relocated them to safe habitat, so they’re not entombed under these developments. We have wildlife protection efforts to help prairie dogs in the West. We do fertility control for African elephants in South Africa, so you don’t have surplus animals that get funneled into these exotic animal trades.

e360: How did you decide to devote your career to animal welfare or to that cause?

Pacelle: I had a deep and close connection with animals throughout my childhood. As I got older, I began to probe what the consequences of some human acts were towards animals. I realized that there was another side to human dealings with animals, and it wasn’t all just about this close connection that we have, but we were misusing our immense power and causing tremendous harm, whether it was factory farming or habitat destruction or the killing of seals or whales for their parts or for their products. I decided that with human beings exhibiting so much mistreatment and cruelty toward animals, I didn’t want to be a bystander. I wanted to do something about it.

Top photo of caged hens by koko-tewan via Shutterstock

How the Humane Society’s CEO connects empathy and economics