The 22-acre island in San Francisco Bay is now a tourist attraction operated by the National Park Service. But until 1963, "The Rock" housed a supposedly inescapable prison made famous by the movie "Escape from Alcatraz."

Today, it's also known for its unique, 400-kW solar microgrid, one that scaled some tough obstacles and was nearly two decades in the making.

How it came to be

The island became unintentionally energy independent in the 1960s when a storm broke the electric cable to the mainland grid. After that, Alcatraz relied on diesel generators. But they created unpleasant air quality for tourists and fines for the park service.

So in the 1990s, the park service began installing solar panels with the help of the Sacramento Municipal Utility District and the National Renewable Energy Laboratory.

"They actually got as far as building some of the racking systems for the site. But then there were protests from historical preservation groups and they put the whole project on hold," said Darren Hammell, co-founder and chief strategy officer of Princeton Power Systems.

The project was revived several years later when $3.6 million became available to solarize Alcatraz through the 2009 American Recovery and Reinvestment Act. Princeton Power Systems entered the scene to design and provide equipment for the microgrid.

This time, better options existed to make the 1,360 rooftop solar panels more discreet. Princeton Power Systems was able to install a flat system, invisible from the shore that didn't damage "the look and feel of the landmark," Hammell said.

Still, it was not an easy project. Workers carefully were monitored by historic preservationists, who at one point threatened to sue for inadvertent damage to a concrete slab. Harsh conditions — wind, salt and fog — required protective encasement for equipment. But no new structures could be built. So modern electronics had to be tucked unobtrusively into historic enclosures.

"We had to do some interesting things to protect the equipment from the elements. But it was done in such a way that it didn't interfere with the existing structures. These advance batteries and inverters and electrical systems are all juxtaposed in older, untouched structures," he said.

The Alcatraz microgrid powers not only the main prison building, now a museum, but also dozens of smaller structures, as well as a media room, lights and a charging station for golf carts used for transportation around the island. The microgid equipment was integrated into the existing diesel system and uses wiring that was already there.

An AC coupled system, the Alcatraz microgrid (PDF) also is interesting from an electrical perspective.

This makes the system efficiency "very, very high" because the solar energy doesn't have to go into the batteries, he said: "It gives us more control over when we charge and discharge the batteries, and can improve the life time of the batteries."

Princeton Power Systems designed the microgrid so that it can interconnect with the main grid, should another undersea cable be built. But at this time, it is more cost-effective for the island to rely solely on the solar microgrid, Hammell said. 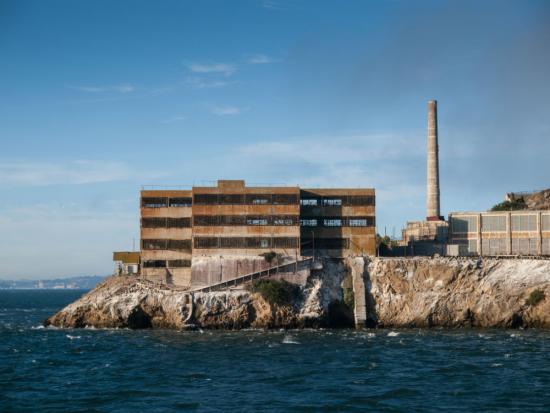 Because of its autonomy, the microgrid must be highly redundant. A master controller monitors the system to create maximize solar use and minimize use of diesel generators. If the master control system ever becomes damaged, each of the eight inverters in the system can operate autonomously.

"Even if multiple components get compromised for whatever reason, each individual inverter will continue to power the islands load. So it provides a lot of redundancy if anything goes wrong," he said.

Because of the various challenges, the price tag for the Alcatraz microgrid was higher than it would be under normal conditions. Replicating the system at a less challenging site would cost about $4 per watt, Hammell said.

For Princeton Power, the project created a highly visible showcase of its technology. "It was a crucial point for our company," Hammell said. "To this day, it is the project that gets the most name recognition and gets people excited about microgrids."

Business is good, he said, with a dramatic escalation in the last 24 months, driven by the drop in solar prices, battery advances and favorable policies in places such as California and New York.

"We have expanded production four- or five-fold within the past two years. Our factory is basically sold out to the end of the year," he said. "It has been a pretty rapid change from developing technology and trying to educate customers about microgrids and about advanced energy storage. All of sudden, it flipped to more demand for these kind of systems than we can support."

So Alcatraz, a place full of history, may be making some more — this time as it advances microgrids.

Top image of Alcatraz by Peter Pawlowski via Flickr. This article originally appeared at EnergyEfficiencyMarkets.com.