Grim warning from the IPCC: No turning back from climate change?

Grim warning from the IPCC: No turning back from climate change?

Climate change is already affecting the global economy and is likely to become irreversible without rapid action to limit fossil fuel emissions, a draft of a major new U.N. study reportedly has warned.

A 127-page final draft of the latest Intergovernmental Panel on Climate Change report sent to governments Monday warned the effects of global warming already are felt across all the continents and oceans and further emissions will increase the likelihood of "severe, pervasive and irreversible impacts for people and ecosystems."

According to the report, which follows a series of comprehensive reports from the IPCC in the past year on climate science and impacts, temperatures already have increased by 0.85 degrees Celsius since 1880, a more rapid shift in the climate than that which heralded the end of the last ice age about 10,000 years ago.

The draft paper holds out little hope that countries will be able to limit global warming to the agreed goal of 2 degrees Celsius, with temperatures likely to rise by almost 4 degrees by the end of the century if the world continues to pump out emissions at the current rate.

The dangers of rising temperatures include damage to crop production, rising sea levels, melting glaciers and more prevalent heat waves. However, the report also raises the prospect of climate change exacerbating societal issues such as conflicts and refugee crises. Separately, the World Health Organisation warned Tuesday that climate change is already causing tens of thousands of deaths every year through shifting patterns of disease, extreme weather events, the degradation of water supplies and sanitation and impacts on agriculture, all of which could be alleviated by taking swift action to tackle climate risks. 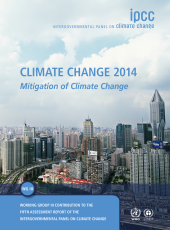 The IPCC study, which has been leaked to a number of news agencies, reportedly added that the potential economic losses following average global temperature rise of 2.5 degrees Celsius could reach 2 percent of global income, but delaying action will increase both risks and costs. Putting off action until 2030 could raise the cost of tackling climate change to 2050 by 44 percent, the IPCC calculates.

While there appears to be little new in the report that has not been covered in a slew of papers published by the IPCC over the past year, the warnings and language are increasingly stark. "Without additional mitigation, and even with adaptation, warming by the end of the 21st century will lead to high to very high risk of severe, widespread, and irreversible impacts globally," it stated.

The paper, due to be released in November, will aim to focus minds ahead of global UN climate talks that month in Lima, Peru, which aims to lay the groundwork for the crucial Paris Summit in late 2015, where countries have agreed to finalize an international emission reduction deal.

However, while the U.N. talks have delivered some encouraging progress in recent years on issues such as limiting emissions from deforestation, deadlock remains over how countries ultimately will share responsibility for emissions reductions.

This week The New York Times reported that President Obama is looking to break the deadlock through a new non-formal accord that "obligates" countries to meet goals on reducing emissions and sending aid to poorer nations to help them combat climate change.

Under this proposed format, the only legally binding consequence of not meeting the targets would be publishing periodic progress reports and politically embarrassing meetings designed to "name and shame" countries that have not met their goals.

The mooted plan likely would spark fierce opposition from many developing nations, who consistently have argued that industrialized nations should face legally binding emission reduction targets and steep penalties for failing to meet them.

However, successive U.S. governments, as well as governments from large emerging economies such as China and India, repeatedly have rejected calls for legally binding targets. The United States has been particularly vocal in its opposition to such conditions, not least because it would require two-thirds Senate approval to ratify any treaty — a scenario that is all but impossible to envisage given staunch Republican opposition to cutting emissions.

"If you want a deal that includes all the major emitters, including the United States, you cannot realistically pursue a legally binding treaty at this time," Paul Bledsoe, who has worked on climate-change issues with both the Clinton and Obama administrations, told The New York Times.

The new plan could lay the foundations for a compromise agreement that imposes ambitious new emission reduction targets, which may lack legal backing but still could serve to mobilize a significant increase in low carbon investment. However, it risks inciting further charges from developing nations that the United States is seeking to wriggle out of its historic responsibility for tackling climate change.

Either way, the IPCC's warnings never have been clearer: dangerous climate impacts will become inevitable and irreversible unless urgent action is taken.

Top image by scenery2 via Shutterstock

Everything you always wanted to know about the U.N. climate talks