Are students getting the sustainability skills they need?

Are students getting the sustainability skills they need?

Today, Net Impact publishes its ninth annual survey of social and environmental graduate school programs, called “Business As UNusual” (download). The title notwithstanding, it reveals that such programs have become woven into the fabric of many college and university curricula — that teaching sustainability is, indeed, business as usual on campuses these days.

That doesn’t necessarily mean these programs are equipping today’s students for tomorrow’s challenges.

Net Impact, a membership group of students and young professionals seeking “to work within and beyond business for a sustainable future,” has chapters on more than 300 college campuses around the world, the bulk in North America. It also has a large and vibrant professional network of alumni, a high percentage of whom are working in sustainability-related jobs in the private, nonprofit and public sectors.

Each year since 2006, the organization has surveyed students about college and university social and environmental graduate programs, including each school’s offerings, students' assessments of its strengths and weaknesses, a sampling of courses, annual program costs, key faculty and other information. The resulting report rates nearly 100 different schools.

All good, but that's not necessarily what interests me about the report. For the past several years, Net Impact also has surveyed student attitudes about whether their schools are meeting their needs, as well as the overall importance of corporate sustainability to the world of business.

The survey results suggest that graduate programs aren’t keeping pace with student interest in social and environmental issues. When asked to describe their satisfaction with the sustainability curriculum at their school, the percentage of students who say they are “completely” satisfied has dropped, from 27 percent in 2010 to just 16 percent in 2014, the lowest level in the five years Net Impact has asked this question. "Not at all" satisfied jumped from 1 or 2 percent the past four years, to 5 percent this year. This, despite the overall growth of social and environmental course offerings.

How satisfied are you with the number of courses on
social/environmental issues? 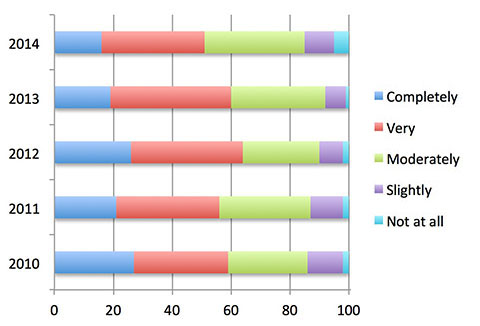 Student sophistication about these issues seems to be growing faster than what schools are offering, said Linda Gerard, Net Impact’s VP Brand Marketing and Innovation. “There is no doubt that the mainstreaming of social and environmental impact across business schools is continuing to grow,” she told me. “The majority are increasing the integration of those issues in exciting and innovative ways, both because the market demands it and the students demand it.”

However, she added, “Schools are doing more than ever but student satisfaction ratings are lower than ever. The bar is rising in terms of student expectations.”

This is not the first time Net Impact has noted the disconnect between business schools and the business world. A study three years ago conducted with the World Environment Center found that companies do a lot of internal training and preparation because grad school sustainability curricula is much too narrowly focused.

It’s not that schools aren’t innovating. According to Gerard, over half the schools have found new ways to integrate social or environmental themes into business education. Trends, she said, include increasing cross-club, cross-school and cross-discipline approaches, infusion of design thinking to create social innovation and more experiential learning offerings.

Among the innovations are the Haas Socially Responsible Investment Fund, offered at the UC Berkeley graduate business school. The program recently completed an oversubscribed crowdfunding campaign, raising $100,000 to enable students to invest real money, not merely trade in hypothetical accounts. Another innovation is at Cornell University’s S.C. Johnson Graduate School of Management, which offers students customized, one-on-one coaching and mentorship through a dedicated sustainability counselor at the school's career center.

It’s progress, to be sure, but is it enough? Arguably, not. When Net Impact asked about the top areas where graduate programs could improve, impact career and experiential learning support topped the list. 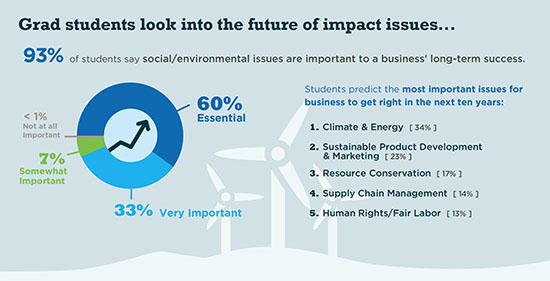 I was a little put off by one survey question. It asked whether students would be willing to earn a salary that was “15 percent lower than you might otherwise make” in order to land a job that seeks to make a social or environmental difference in the world (83 percent said they would be willing) or or to work for a company committed to corporate and environmental responsibility (71 percent). Both numbers were up slightly over the previous year.

But simply asking this question helps perpetuate a myth: that aligning your career with your values requires a financial cost in the form of lower earnings. That’s sometimes true, especially for those who take a nonprofit or public-service career path, but not necessarily in the corporate sector. Moreover, it’s unclear whether the increase in students agreeing with such statements reflects the growth of new metrics for success or merely the desperate state of the job market, particularly in corporate responsibility jobs, which aren’t necessarily growing.

“It’s important to note that many of our members choose to enter the nonprofit or social enterprise fields, where monetary trade-offs are often a reality,” explained Gerard, when I asked her about this. “Coveted CSR roles in business are harder for students to access early in their careers.”

Perhaps most telling was the growth in the percentage of students saying, “At this point, I feel pressure to take any role,” up nearly a third from 2013, rising from 27 percent to 35 percent. The percentage of students expressing confidence that “I’ll find a job aligned with my values, interests and passions” has declined steadily since 2012, from 91 percent that year to 83 percent in 2014. And students agreeing that finding an impact job was a top priority for students in their program declined 9 percent in just one year, the largest one-year change in any results.

Clearly, more needs to be done to ensure that students don’t perceive corporate responsibility and “impact jobs” as merely a luxury for good economic times.