Some hospitals have been trying to move to organic and locally sourced food. Now, at least one hospital is starting its own farm.

In Pennsylvania, organic pioneer Rodale Institute will run a farm at St. Luke's Anderson Campus. Starting small with five acres, it aims to produce 44,000 pounds of vegetables and herbs next year, and then 100,000 pounds on 10 acres in following years.

Lettuce, broccoli, tomatoes, peppers, cucumbers, summer squash, Swiss chard, kale, garlic, cabbage, beets, potatoes and a variety of herbs will be distributed to six St. Luke hospitals in the area. A 1,120-square-foot greenhouse extends the growing season. A farmer will transition the land to organic and oversee USDA certification.

"The farm will act as an evolving model for institutions across the country as well as for farmers who have the knowledge but lack the resources to start their own farm," said Lynn Trizna, Rodale's farmer. Her three staff members are all aspiring farmers.

"This partnership presents a ‘farm to hospital' model which can be replicated around the world. We're proud to be proving concepts once thought impossible," said Mark Smallwood, executive director of Rodale. 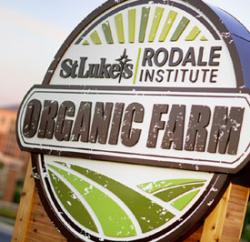 Since its founding in 1947, Rodale has been a pioneer on research and demonstration projects that prove the value of sustainable agriculture and organic food for peoples' health and the planet.

Its Farming Systems Trial is the longest-running side-by-side comparison of chemical and organic agriculture. The study consistently has shown that organic yields match or surpass those of conventional farming, and are about 30 percent higher in years of drought. Current research is on rates of carbon sequestration in chemical versus organic plots, new techniques for weed suppression and organic livestock.

Since the nonprofit hospital opened in 2011, St. Luke's also has put in walking paths, flower gardens and community garden plots for employees.

The original version of the article appeared at SustainableBusiness.com. Top image by thebittenword via Flickr

How urban agriculture could improve food security in U.S. cities