How Tennant sought to flourish through innovation

How Tennant sought to flourish through innovation

H. Chris Killingstad was vice president of a struggling 132-year-old company when he went to an industry trade show in 2002. His company, Tennant, made floor cleaning equipment using technology first developed during the Great Depression.

"When I walked into the room, I saw hundreds of different machines that looked exactly the same, except for their colors," he said. "I realized that we had to do something to differentiate ourselves."

Today he is Tennant's CEO. The company's stock has risen 300 percent since 2002, more than five times faster than the Dow Jones Index.

How did he do it? With a lean, clean and green strategy aimed at contributing to a healthier world. He did it in the face of enormous doubt from customers and competitors who wondered whether "chemical-free cleaning" would pay off. Not only did his gamble prove technically sound, but his vision has inspired and engaged customers and employees.

Tennant exemplifies a new breed of business. It competes on environmental performance — not just the "20 percent less energy and CO2 emissions by 2020" kind, but radical innovation that represents a breakthrough for both customers and investors.

The company's electrolysis-based water technology, ec-H2O, provides user benefits that include eliminating the cost of chemicals and reducing the risk of slip-and-fall accidents by avoiding chemical residues on floors. As Tennant explains it, the technology oxygenates water and electrically converts it into an ionized solution that has both acidic (sanitizing) and alkaline (cleaning) properties. Its ec-H2O line of floor-cleaning products dramatically has outpaced industry sales and helped the company to achieve record profits.

From car company Tesla to fast-moving consumer goods maker Unilever and home improvement retailer Kingfisher, growing numbers of industry leaders are redefining what it means to be a sustainable business. For them, sustainability is no longer about incremental change aimed at reducing harm. They are shining examples of business as an agent of world benefit. Their purpose is to have a "net positive" impact on society and the environment while reaping above-average financial rewards.

What can you and your organization do to become an agent of world benefit? Case Western Reserve University, where I work as an associate professor of organizational behavior, has produced new research that suggests untapped opportunities exist in two areas. 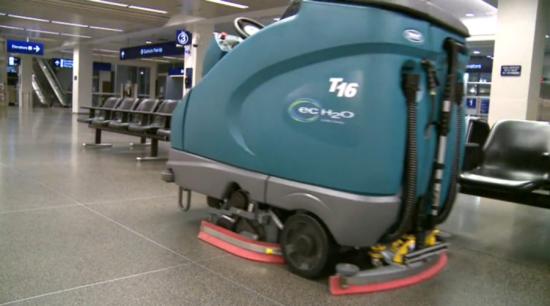 First, businesses must replace the tired notion of sustainability with the much more inspiring one of "flourishing," aimed at creating the world we all want rather than the one we just get by in. Would a healthy marriage be described as sustainable? No, we would want to describe it as doing well or thriving. Flourishing engages and motivates people in an entirely different way from most corporate sustainability efforts. The Tennant vision was not about minimizing harm from the use of chemicals. It was to eliminate chemicals altogether.

Second, businesses need to pay more attention to personal well-being — to whether people are able to feel "whole" at work and to feel treated as human beings rather than fungible resources. We need work environments in which people's values line up with their organization's values to enable them to live purpose-driven lives. Mindfulness and other reflective practices can help people deal with workplace stress by reconnecting them to what they care deeply about. Cultivating emotional and spiritual health is the next frontier in corporate excellence.

Why is this so important? Surveys of the American labor force reveal that over 50 percent of employees identify themselves as disengaged at work, with a further 18 percent saying they are actively disengaged. A blunt May 31 headline in The New York Times reads, "Why you hate work." It detailed white-collar dissatisfaction, including factors such as the lack of meaning and significance in jobs.

More generally, business is suffering from an image problem. Corporations bounce from accusations of fraudulent financial practices to environmental disasters, from claims of low hourly pay to promoting products seen as of questionable value to consumers.

How to get started on a new path

It is time to recognize that narrow short-term ROI calculations for environmental performance and social responsibility are no longer enough. We must change who leaders are being, not only what they are doing.

Not surprisingly, companies already are demonstrating that being an agent of world benefit can give a big boost to the bottom line. Google, General Mills, Fairmount Santrol, Clarke and GOJO Industries are among the new breed proving the business value of full-spectrum flourishing, starting with the inner well-being of their people.

Case Western Reserve's Weatherhead School of Management will host its third Global Forum for Business as an Agent of World Benefit from Oct. 15 to 17. H. Chris Killingstad from Tennant will be there. Top image of flourishing tree by Porojnicu Stelian courtesy of Shutterstock.

Earth Day 46 years later? Businesses are friends with the earth

100 seeds for a sustainable future: Part 3

Management Knowledge Leading Positive Change: Are We Ready to Tip?