Hacking the way to 7 stages of eco-innovation

Eco-innovation is the practice of developing and shaping ideas into useful forms to create business value and benefit the environment at the same time. Eco-innovating with apps also bolsters brand awareness, engagement and optimization.

In this techy subculture, I discovered a gateway to unraveling the mysterious process of innovation. Here are some insights gleaned from project managers, developers and marketers into the universal method by which teams bring great ideas to life.

The NTx Apps Challenge is an iteration of the maker movement, a cultural phenomenon in which consumers become problem solvers by using their own hands, tools and technologies. Charlie Lindahl, a Houston-based systems analyst I met at a recent sustainability summit, first introduced me to makers. Soon I, too, was experiencing the joy of DIY.

Making is more fun when you connect with others working on the same goal. In fact, teamwork and esprit de corps are essential to the creative process. Whether in an organized community or a spontaneous jam session, collaboration inevitably reveals facets of a problem not visible through one person's perspective, no matter how evolved it may be.

"A good interdisciplinary group can do anything," said Lindahl. "You'll be out of the box so fast it'll make your head spin. There's nothing more powerful."

I saw this in action at the first hackathon for the NTx Apps Challenge, a joint venture of the Cleanweb Initiative and the North Texas Commission. Some developers were sitting alone, pursuing their projects independently. However, in one corner sat the "Water Wars" team, an animated group surrounded by lists and sketches on poster-sized Post-its. Kim Hall, a CPA volunteering her time to manage two projects, was leading the brainstorming.

When I spoke to Hall later, she explained, "You sit down and talk, you facilitate, and then good ideas start coming. From a high level everyone is in agreement, but then it comes down to how to execute. This is where it gets much harder. We got down the path, but then we had to pivot. This happened over and over."

Pivoting is normal, if not essential, to innovation. After going through the cycle a few times, they settled on creating an online gaming platform where teams compete to save water. Hall presented the concept to a focus group of high schoolers who loved the idea.

However, there are hurdles in terms of development. In Hall's experience, only 10 to 15 percent of developers in these challenges seem to be looking for teams. Most developers come to the table with their own products, preferences, bandwidth issues and IP concerns. But in this dearth of developers, Hall also saw a new opportunity.

"My response to this is I am going to learn to code," said Hall. "I've spent the last 2 months on Khan Academy and I have my Gemalto board all set up. I'm ready." For a CPA, this is quite a pivot.

"I should have started this years ago," said Hall. "It's not enough anymore just to have the idea. You have to be able to execute."

Armed with an MIS degree from University of North Texas, Andrew Miller has been channeling his technical skills toward online communities since grad school. He sees app development as a means to an end, which is nothing short of sustainable transformation. 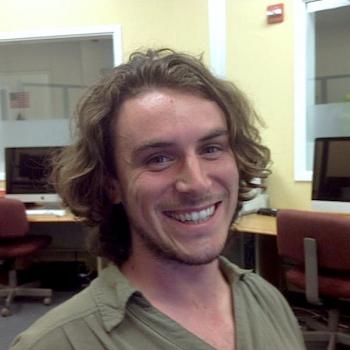 "IT can only take the solution so far," said Miller. "Eventually you need to touch a material with your hands. Sustainability has to become physical."

Miller has been focusing on this problem for over a year, when he began to zero in on the local food community of Denton (home to UNT).

"Composting is not easy, but it is feasible," said Miller. "It doesn't take that much training to get composting right. It's low-hanging fruit."

In July 2013, he launched a p2p Web application pilot for diverting organic debris from the landfill to the compost heap. From conversations with users, he found they liked the idea but weren't actually composting. Translating interest into behavior change became his next goal.

Miller wanted to create a peer-to-peer compost map with which communities could self-organize around composting. Meanwhile, his friend Thomas Wild was using Miller's app for his own composting pick-up service. Miller had some choices to make: He could keep going on his own or team up with Wild. They decided to join forces.

Their pilot program lasted four months, during which time they sent a survey to their members (12 individuals and three businesses). They looked at the logistics of the pilot program to determine which decisions could be automated.

Miller presented their pilot program (then called Feed Denton Compost Exchange) and a proposed smart design for composting in Berlin at iConference 2014. The member feedback plus the recognition from Microsoft gave him the confidence to move forward with developing the app.

From automation to transformation 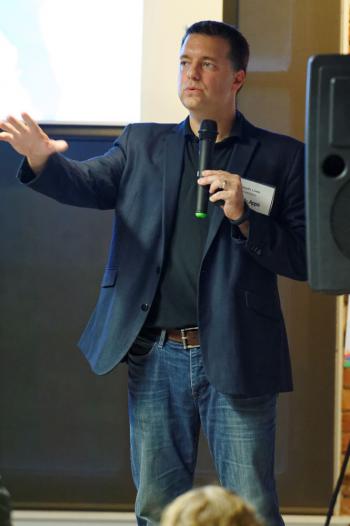 "Some other functionality we are working on is data visualization of the waste collected during pick-ups," said Miller. "We want to show data on a map to stimulate a sense of community, teamwork — maybe some healthy competition."

"We can also gamify by creating a member leaders board to link in with local businesses to spur sustainable behavior."

Miller doesn't know if they'll get to that part in time for the Challenge, but he knows they need to incorporate monitoring of the compost pile, Ph level, moisture, temperature and other variables.

"Those figures can tell us the health and activity of our composting and warn of potential fire risks, a serious issue when you start up large composting piles like we're doing."

That's the technical evolution of their story, but there's also the team one.

"For startup weekend in Denton last March, we got together a team of eight and earned third place," said Miller. "Gavin [Coelho] and Kory [Brown] stuck. They've proven to be extremely sharp, dedicated guys. We're all friends."

Miller has big plans. He anticipates that other businesses and municipalities might be able to use a customized version of Community Compost.

"Hypothetically, if a business like Compost Denton were well-established and the residents and businesses were separating our waste in an organized fashion, we could be decreasing our organic landfill waste by 40 percent while creating nutrient-rich soil," said Miller, citing figures based on waste stream data collected from the city of Dallas.

NTx Apps Challenge participants vary considerably on their skill level, intrinsic motivation and stage of development. But there is one great enticement to eco-innovation: cash. Participants have until Oct. 6 to submit their apps for a chance to earn a share of the $80,000 in prizes to continue development.

Contestants in the NTx Apps Challenge may be working to solve specific environmental challenges, but the innovation process they're demonstrating is universal. Here are some key takeaways from each stage.

1. Ideation. Brainstorming is best when it's interdisciplinary. At Apple, for example, the role of the designer is as important as the engineers, marketer and programmers. This is one thing that Steve Jobs understood very well.

2. Collaboration. Even naturally self-propelling innovators still benefit from the support, knowledge, tools, skills and code that their mates bring to the table. It takes a village to turn a concept into reality.

3. Education. A good idea is not enough. You have to be able to execute. Skills development for individuals, training for teams and research to continually inform the process are vital for success. Stop learning, and you will stall out.

4. Automation. Automation is a likely outcome of an innovation process, but tools that automate are also valuable inputs. Makers and hackers rely on platforms such as Gemalto M2M and Arduino to help them create.

5. Gamification. To make behavior change go mainstream, it has to become fun. The Disrupt SF 2014 Hackathon winner Shower with Friends sounds like going green with benefits, but it's not what you may think. The app makes a game of water conservation by allowing users to compare theirs with that of their friends. (Watch Jane McGonigal's TED talk Gaming can make a better world for more ideas.)

6. Proliferation. According to the Diffusion of Innovation Theory, when the rate of adoption hits 16 percent, innovations can go mainstream. Achieving scale is the holy grail for winners, but even "losing" teams of eco-innovators spark friendships and partnerships that positively can affect their communities.

7. Transformation. The apps coming out of these challenges have the potential to harvest and channel big data to change practices at a systemic level. Innovators can influence transformation one product at a time — and as Jobs showed, the potential impact can extend as far as their vision will take them.

Audacity and hope over digital apps: An arbiter’s-eye view

Beyond geeks and governments: Expanding the civic marketplace

Watching the clock: A judge's-eye view

Busting through the clay layer: A developer's-eye view