Who cares if 97 percent of scientists agree on climate change?

Who cares if 97 percent of scientists agree on climate change?

Former BP scientist and DOE Undersecretary Steven Koonin landed an elbow to the ribs of the "97-percenters" in a recent Wall Street Journal article, "Climate Science Is Not Settled."

Climate policy advocates called foul. The result is another sideline dust-up in the continuing climate science consensus debate. Not just the debate over whether there is for-all-intents-and-purposes scientific consensus on the big questions (there is), but also the debate over whether it's a good idea to make "97 percent of scientists agree" a standard pro-climate-policy talking point.

Spoiler alert: It's not.

Koonin brings strong credentials to the table, as well as some baggage. In addition to his stint as undersecretary in the Department of Energy for President Obama, he was a theoretical physicist at Caltech and is currently director of the Center for Urban Science and Progress at New York University. He also deposited some paychecks as chief scientist at BP.

In any case, Koonin is certainly the kind of person who stirs the pot when he says, "There isn't a useful consensus at the level of detail relevant to assessing human influences" when it comes to climate change.

The thrust of the article was not really that controversial: scientists agree on the broad questions such as, "Are humans influencing the climate?" (Answer: Yes).

Things get much fuzzier, however, when you get down into the weeds with questions such as, "How, and how much, exactly, are humans influencing the climate?" (Answer: We don't exactly know.) But the suggestion that climate science is not settled, however subtle the distinction as to what that means, is hostile to a central narrative of pro-policy advocates, and therefore had to be countered.

The next day, Climate Science Watch put up a post that took on Koonin's arguments, saying: "[Koonin's article] doesn't hold up when confronted with all the evidence."

The view from the sideline

It is highly unlikely that this brief exchange changed the minds of anyone who took the time to read both articles. Deniers would applaud Koonin for pointing out what they have been saying all along. Climate policy activists would be outraged but not really surprised that the Journal would publish such blatant untruths, and take solace in the fact things were set straight by the real experts. So no one convinced anyone of anything. Return to your corners and we'll call that round a draw, right?

Like a boxing match, this debate took place in the media, in the public sphere. The "expert" judges — the passionate advocates on both sides — may have marked their cards a draw, but the audience witnessed something. Even if people gave the bout scant attention, or if they didn't have the background to really understand what was going on, the exchange created meaning in their minds. We know from psychology and communication science that highly involved audience members already have a strong opinion one way or another. 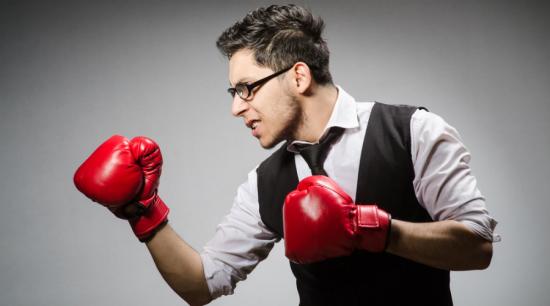 It is safe to say that none of these folks were "convinced" by the other side. If you're reading this, you're one of these. But what of everyone else?

This question takes us into the domain of public communication. When it comes to mass mediated messages, things such as semantics, arguments, evidence and facts are only part of the equation. Audiences take in information with varying degrees of attention and with diverse and dynamic sets of pre-existing worldviews related to the issue at hand.

People make quick judgments about new information based on the limited knowledge of their mediated realities so that the information environment can be reconciled with their existing models of how the world works. Those message elements that are most easily and quickly "fit" with existing schema are internalized; other information gets ignored or forgotten. This has interesting and important implications for those engaged in public debate about policy.

A scene from the movie "Thank You For Smoking" — based on Christopher Buckley's humorous and incisive novel about PR and big tobacco — brilliantly dramatizes one very important and relevant dynamic of public communication.

In the food court of a bustling amusement park on a summer night, Nick Naylor (the "Sultan of Spin") is explaining to his son Joey how if you argue correctly, "you're never wrong." Joey is skeptical, as he clings to the idea that there are objective truths that can't be avoided or argued away. Sound familiar? To prove his point, Nick proposes a hypothetical argument where he takes the side of vanilla ice cream and Joey takes the side of chocolate. Before long, Nick has Joey defending chocolate as the only flavor anyone needs, while he is promoting freedom of choice and liberty.

"But that's not what we're talking about."

"But you didn't prove that vanilla is the best."

"But you still didn't convince me."

"But I'm not after you," Nick says, pointing around to the crowd. "I'm after them. "

So what did "they" — the people in the crowd, on the sideline, in the audience — hear in the latest installment of the "settled science" debate? Exactly. Arguing about the facts = the science is not settled.

Expert public communicators understand this about message strategy: The objective is not necessarily to convince people you are right and they are wrong, it is to frame the debate in a way that indirectly conveys preferred assumptions about "reality" to the audience watching at home. To frame information in a way that favors certain mental models over others.

You don't want to do this directly because people quickly will recognize it as a persuasive attempt and discount its credibility. You do it by subordinating the point you want to make in the context of another discussion (thank you, Nick Naylor).

People who witness the conversation, and accept it as a true happening (not a staged stunt of some kind), also will accept and internalize the subordinated assumptions, usually subconsciously. In this case: If it is true that scientists are arguing over whether climate science facts are settled, then it must also be true that the science is not settled. This favors a mental model where climate science remains an area of uncertainty and disfavors a mental model where uncertainty has been reduced to the point where action is necessary.

"But they're wrong about the nature of the scientific consensus," many will say. "They did not convince me!" Well, Joey Naylor, that is not what they're talking about. The point is not to convince you, it is to create and support specific meanings — specific mediated realities — in the minds of "them."

Making near-consensus — 97 percent of scientists — a central element in the pro-policy debate opens up a rhetorical hole that policy opponents can drive a rhetorical truck through. A debate on the nature of consensus means the science is not settled, which means it's premature for costly public policies.

So what are climate-policy advocates to do? In the words of "Mad Men's" Don Draper, "If you don't like what's being said, change the conversation."

Just say to yourself, "That conversation is over and we didn't convince everyone but we don't have to and we're moving on." Then pivot to a conversation with a preferred set of subordinate assumptions. When it comes to climate consensus, for example, one could pivot with, "The history of science has shown that there is always some level of disagreement and uncertainty. But history has also shown us that pursuing policies supported by the majority scientific opinion and predominance of scientific evidence is the best way to go."

No doubt climate policy opponents will continue to want to change the conversation back and mire the public debate in the degree of scientific consensus, the degree of human causation, the relative impact of natural climate cycles, and so on. These rhetorical forays must be blunted and re-directed, not engaged, but also not ignored (Remember John Kerry and the Swiftboat Veterans for Truth.). Pivot.

It should also be noted that "changing the conversation" will not always be easy. This kind of message consistency takes discipline, which is extremely difficult in the context of a far-flung and diverse social movement. But it is possible, with the right leadership and focus, to achieve agreement and coherent action on what the conversation should be about, if not on all the policy solution details.

Top image by Marish via Shutterstock.

Is Peter Gleick a Climate Hero?