Oil companies quietly prepare for a future of carbon pricing

Oil companies quietly prepare for a future of carbon pricing

In the winter of 2013, after mounting pressure from shareholder groups who wanted to understand the impacts of any future climate legislation, the biggest U.S.-based oil companies were nudged into a surprising revelation: "Carbon," the stand-in for carbon dioxide and all other greenhouse gases, had been given a price in the companies' internal accounting. The externalized and largely uncounted costs long associated with fossil fuels — 20 pounds of CO2 emitted with every gallon of gasoline, according to the EPA — were being given a number.

At the time, the biggest of the oil majors, ExxonMobil, reported a carbon price of $60 per metric ton to the Carbon Disclosure Project, which released the figures (PDF). Chevron, BP and Royal Dutch Shell reported a price of up to $46 per ton, and for the first time, the oil majors appeared to be lifting the lid on the accounting sleights of hand that have kept the full costs of oil hidden from public view.

The toll of fossil fuel emissions — from the ballooning costs of crop insurance tied to climate-related weather extremes, to the ravages of sea level rise in coastal areas, to stresses on health services as tropical diseases migrate northward — is part of the discussions at the U.N. climate summit in New York this week. And the new carbon mathematics is putting a spotlight on the oil industry: Earlier this year, all four major oil companies were listed in the journal Climatic Change (PDF) as being among the 90 global businesses responsible for two-thirds of the world's greenhouse gas emissions.

None of this suggests that the world's petroleum giants are contemplating a move away from oil. It does, however, signal the emergence of a new era in which oil companies' financial liability for climate change is coming to be more clearly understood.

Engineers at Carnegie Mellon University and Arizona State University concluded, in a 2011 study published in the Proceedings of the National Academy of Sciences, that conventional cars over their lifespan come with an average of $2,000 in costs related to greenhouse gas emissions. These costs, the researchers noted, are not borne by the drillers, refiners, distributors and consumers of oil, but by taxpayers in general, who bear the brunt of the financial consequences that manifest months, years and decades later. Yet no mechanism currently exists to pay for this massive economic liability for climate change.

Of all developed countries, Americans pay the least, by about half, for their gasoline; a $4 per gallon price at the pump looks more like $8 in Germany and much of Europe. That extra amount partly consists of environmental taxes, which are used to mitigate the pollution and public health impacts of oil, to help pay for government-subsidized research into technologies to reduce the environmental footprint of fossil fuels, and to provide more generous social services.

In the United States, the gasoline tax essentially has shrunk since 1993, when President Clinton, egged on by Vice President Al Gore, pressured Congress to increase the gas tax to 18.4 cents per gallon. But environmental taxes in general account for just 0.8 percent of GDP in the U.S., compared with 2.4 percent in Europe, according to the Organization for Economic Cooperation and Development (PDF). That 1.6-percent difference would provide the U.S. government with about $240 billion annually in extra revenue, some economists have noted — a portion of which could be used to adapt to and mitigate the monumental costs of climate change. 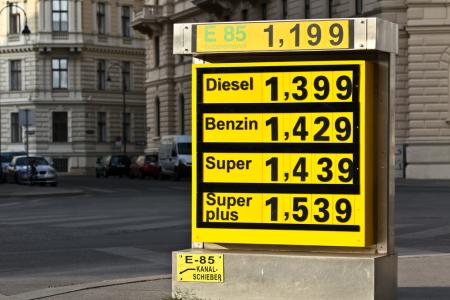 Of course, that would require setting a price on carbon. Yet with the exception of localized efforts at carbon pricing in California and, to a lesser extent, a small group of states in the Northeast, the United States so far has proved unwilling or unable to do this.

For the oil companies, then, tallying up the costs of climate change amounts to a registry of risk — and the costs acknowledged by ExxonMobil and other oil companies are, in the words of one energy analyst, "a proxy for future climate policy." While the politics have stalemated in Washington, ExxonMobil, for example, is not assuming it always will be that way. Exxon's carbon price can be seen as a hedge against the recognition that, at some time in the future, it will be time for big oil to begin paying for the full range of costs associated with its product.

"What happens to fossil fuel companies," said Mark Trexler, CEO of the Climatographers, a consulting firm that works with companies to identify environmental risks, "when you have two Katrinas and 23 tornadoes and the world wakes up and finally imposes a meaningful price on carbon?" To not pay attention to such risks, he said, would amount to a dereliction of fiscal duty.

"If they're not thinking about a future business model in which they're forced to internalize the costs of climate change, then they will be compromised in their ability to deliver energy services in the future," said Mikhail Chester, a researcher at Arizona State University and an author of the paper estimating the life cycle greenhouse gas costs of automobiles.

Those costs and risks are reflected in data compiled by Bloomberg, the biggest financial information provider in the world. One of the company's latest additions is a Carbon Risk Valuation Tool (PDF), a computerized set of environmental threats associated with fossil fuel and other extractive industries. For the first time, investors can toggle between two sides of the bet on fossil fuels: Choose one tab and you get a company's financial performance; choose another and you get its greenhouse gas emissions and the risks that new regulations, in the United States and other countries, could leave the company's assets untapped and underground.

"We believe the day will come when you have full-cost accounting," said Curtis Ravenel, who helped conceptualize and design the system as the Global Head of Sustainability Initiatives at Bloomberg. "We're taking those externalities and integrating them into [traditional] cash flows and the price and earning ratios."

The tool is set to a series of defaults that can be adjusted depending on the nature of the risk: What would happen if carbon is priced at $50 per ton in 2020, for example? Or at $20 a ton in 2030? What if a carbon price ensures that 80 percent of assets have to remain in the ground by 2030? This is the first time such metrics are integrated in ways that financial professionals can understand, allowing them to share information on risks that the oil companies themselves are integrating into their internal carbon price.

Alan Jeffers, ExxonMobil's chief media officer, explained that the company's pricing of carbon is "a proxy price reflecting all the action the government could take to regulate the exploration, transport and processing of carbon fuels." In other words, it rises and falls based on a perception of political and public pressure for restrictions on carbon emissions. 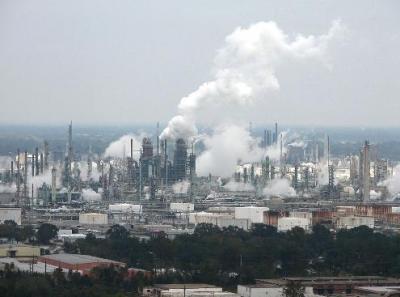 Jeffers said that ExxonMobil has been calculating an internal carbon price since 2007, when it was far lower than it is today. The price, Jeffers said, was raised in 2009 when Congress looked likely to impose a cost on carbon through cap and trade, and it declined afterward. Now it's up again, he explained, reflecting the combination of forces impacting the risks and costs that oil faces in the marketplace: tightened mileage standards by the EPA; renewable fuel standards in California and other states; the talk from President Obama, the World Bank and others about a coming price for carbon; and rising public pressure for action on the climate.

Exxon's internal carbon price varies widely around the world — a testament to the divisions that exist in how different countries are dealing with climate change, and which negotiators hope to resolve at climate talks in Paris in 2015. Jeffers said that the company's price of carbon is highest in the European Union, where a cap-and-trade scheme has been operating for nearly a decade and some nations are more strictly enforcing greenhouse gas limits. On the other end of the spectrum, the price is essentially zero in many parts of the developing world, where simply keeping the lights on is a priority and demands for political action on climate change have been more muted.

Exxon's $60 per ton price — Jeffers said it recently has been revised upward to $80 — is far beyond any actual price in the U.S. market or anywhere else. In the three major carbon markets where those costs most clearly can be articulated — in Europe, California and, recently, in seven of China's most industrialized provinces — the price of carbon hovers around $10 a ton. One reason for the large difference, Jeffers said: "It's like buying a house. You need to overestimate your cable bill, your mortgage payments and all those other costs. We need to overestimate what could result from government policies."

Of course, the "house" in this case is the infrastructure of oil. And one of the most revealing aspects of the carbon pricing estimates being developed by Exxon and other oil companies is just how much they believe that even relatively high carbon prices will not fundamentally threaten their bottom lines.

Even at $80 per ton, Jeffers said, none of Exxon's assets would be stranded. The company's own report to a group of shareholder activists in March asserted that the price would have to rise to between $150 and $200 a ton — more than 10 times its current estimate — to alter fundamental decisions about investing in oil.

Whether it's $10 or $200 a ton, any discussion of carbon pricing still begs the question: Who pays? As noted by Severin Borenstein, an economist at the Energy Institute at the University of California, Berkeley's Haas School of Business, "If the price for carbon and the price [of oil] go up at the same rate, then the [oil companies'] profit margin does not change."

Under most scenarios, the consumer will end up paying any carbon fees because the higher costs will be passed down to them at the pump. This is why what the government does with the revenue generated from carbon pricing is so important. If it is delivered back to consumers in the form of a rebate, or used to build better public transportation and fund research into cleaner energy sources, such revenues could offer significant public benefits. In addition, a price as low as $60 or $80 a ton could begin tilting people away from oil to other forms of energy. If drivers start switching to electric vehicles, for example, it will matter a great deal for Exxon's bottom line whether those electrons are coming from natural gas, in which Exxon also has invested heavily, or wind and solar, a sector where Exxon and other major oil companies so far have little footing.

For now, however, Exxon doesn't see that as a realistic outcome. From its point of view, the company's market share remains steady with a price for carbon at $60 or $80 per ton because, as Jeffers put it, "Our forecasts suggest there is no viable alternative to oil."

The challenge from a climate perspective, of course, is proving him wrong.

Really? ExxonMobil left the risk out of its climate risk report

Oil giants are waking up to carbon bubble risks