Last month, the Net-Works team had the honor of being in the heart of New York City during Climate Week, participating in the Clinton Global Initiative.

For the past two years, the Net-Works team, made up of changemakers within Interface and the Zoological Society of London, has been dedicated to designing and proving an inclusive business model. This model enables impoverished fishing communities in the Philippines to collect damaging, discarded fishing nets from the ocean and shores. The nets are sold to our yarn supplier, which recycles the nets into nylon yarn that we use in our carpets.

Net-Works in the Philippines has been a success because of the time and dedication committed by our partnership. Making the decision to participate in the Clinton Global Initiative was difficult for us because the time and resources needed to properly make our “commitment to action” and attend the event were time and resources not going directly to the work on the ground.

Once we arrived, all those concerns immediately were replaced by palpable electricity in the air. At first, we felt it was just the rush of being part of such an epic week in the city, but we soon found out that the air literally was humming with the thousands who descended on New York for the historic People’s Climate March. Heather Koldewey, of the Zoological Society of London, and I quickly rushed down to the street, anxious to take part in such a momentous occasion. It was the perfect way to kickstart the week, marching alongside more than 350,000 people dedicated to making change.

Inspired and energized, we set about the task at hand: declaring our commitment to action.

Our Interface delegate, chief innovation officer Nigel Stansfield, was gracefully received behind the velvet curtain, alongside political and environmental superstars, heads of state and visiting dignitaries.

Meanwhile, in the lobby of the Times Square Sheraton, hundreds of “do-ers” — support staff, program managers, advocates and press — carved out impromptu offices from which to network and connect. Everywhere I looked, people actively were engaged in conversation, excited as they talked through ways to collaborate on some of our world’s most pressing challenges, including environmental protection, supporting the fragile infrastructure of developing countries and providing a sustainable future for precious social and ecological resources.

It was impossible to have a bad conversation. 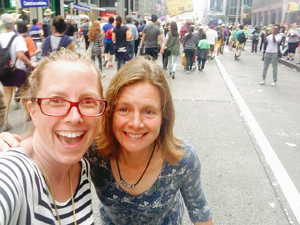 On day two, Nigel participated in an interactive session focused on proving the interdependence of conservation, profitability and economic growth, a meaty topic. He used the power of storytelling to share the history of Net-Works, showcase how the program delivers commercial, environmental and social benefit for all participants, and ultimately delivered our official commitment to action.

So that’s it. We’re official.

We always have believed our unconventional partnership would make a dramatic difference in social and environmental sustainability by bringing some of the poorest people in the world into the global supply chain, and by turning waste into resource. But now we’ve declared to the world that we want to grow — and fast.

When Nigel came out of his session, he walked over to our “office” with the grin of a father who just watched his child ride off without training wheels for the first time. As Jesse Jackson sat to our left and Muhammad Yunus walked down the hall, I realized this was exactly where we were meant to be: together as a team, in a flurry of world-changing activity, throwing down a gauntlet.

To date, we have collected 85,000 pounds of discarded fishing nets with our two hubs in the Philippines. Those are nets that are no longer choking the marine ecosystem, but instead have provided supplemental income for people to help support their families. Now those nets will be given a second useful life — as nylon yarn we use in our carpet tile.

Next year, we will launch Net-Works in the Lake Ossa area of Cameroon, West Africa. Our team of marine biologists, manufacturing experts, materials scientists and innovation managers likely will encounter new challenges and face operational hurdles. I am confident that we will overcome them together as a team.

How Net-Works fishes for a triple bottom line

Inside Interface's bold new mission to achieve 'Climate Take Back'

Recycling fishing gear is a net positive for startups and oceans