If you've attempted to dive deep into the topic of car sharing, chances are you've come across Susan Shaheen, or at least some of her studies. About 18 years ago she fell in love with the concept, even though she'd probably never put it that way.

The idea of car sharing "resonated" with her, she said, as a Ph.D. student at the University of California at Davis looking for a dissertation topic. She saw a lecture by Michael Glotz-Richter, a German Marshall Fund Fellow from Bremen. She was fascinated by behavioral effects of people joining car sharing, and the resulting benefits for the environment, she recalled from her office at the University of California at Berkeley, home of the Institute of Transportation Studies, where she serves as a co-director of the Transportation Sustainability Research Center.

"He essentially showed that 44 percent or 45 percent of vehicle kilometers traveled were declining due to the use of car sharing, and people were selling their cars or not buying cars, somewhere around 7 to 15 I think the numbers were,"  Shaheen said. The reductions in energy use and CO2 emissions were notable, achieved by people changing their behavior.

"I had been working on this idea of the station car that goes to and from the transit station. Is there a way that those vehicles could be shared and we could bring the concept of car sharing to the U.S.? And I was really deeply interested, and studying this by actually demonstrating it, putting a real project on the ground and seeing if we could get people to behave differently, and that's where my work began."

Now Shaheen can prove that the numbers in North America are actually very similar to what Glotz-Richter witnessed in Germany. In a recent study with close to 7,000 participants, a stunning 50 percent either sold a car or didn't buy one because car sharing was available.

And while the general concept has been around for a while now, Shaheen still sees a lot of potential for growth. The classic model of sharing is a round-trip, station-based model. But recently, point-to-point car sharing services have been making inroads, a concept that allows participants to actually use the service to commute to work instead of relying on it more typically just on evenings or weekends.

Shaheen added, "We see college market applications of it in the university environment. We also see employer-based applications of it, and then there's peer-to-peer, so you put your own personal vehicle in. There's a lot of room for expanding this or scaling it into new market segments, both physical and socio-demographic — so older individuals, younger individuals, say in the college setting, but maybe also in retirement communities." 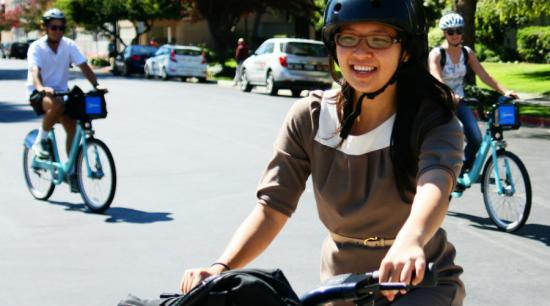 She sees opportunities to move into a suburban setting with peer-to-peer sharing concepts as well. Which does require a significant behavioral change, though — people having to get into the mindset of sharing their personal asset: their car. And there are risks that need to be addressed, such as the questions of what the insurance is willing to cover. Shaheen feels that the context of the greater sharing economy, a hot topic among Silicon Valley investors, furthers the evolvement of making one's car available for others to use instead of having it sit for 90 percent of its lifetime as well.

"People sharing rooms in their houses through services like Airbnb use TaskRabbit, where people are offering up individualized services to other individuals in their communities," said Shaheen. "We are also seeing bike sharing, which has grown really rapidly. We're seeing scooter networks here in San Francisco, and there's a similar type of program in Barcelona. We're seeing ride sourcing or these types of services that allow people to be community drivers of their own private vehicle and take people from point to point, like Uber, Lyft, Sidecar."

New players are coming into the mobility space and providing options, bringing a new perspective to an old problem.

At the same time, players in the traditional auto environment are starting to toy with the idea that they have to think differently about transportation. Maybe the aim is no longer to have as many people as possible own cars, but to provide transportation services — including real-time traffic information and parking information — and allow people to use cars when they need to without having to own them. Often, Shaheen conceded, the environment turns out to be an afterthought, no more than a welcomed side effect.

All gain, no pain

Which brings Shaheen back to her high school years in upstate New York. As a young student, she started thinking about why protecting the environment is considered a sacrifice.

"Why can't it just be a competitive, compelling, interesting and exciting option, an innovative option that makes me feel really good?" she asked herself back then — and it seems that the challenge of yielding environmental benefits without having to sacrifice hasn't lost its relevance today.

Shaheen grew up in what she describes as a safe, suburban environment, taking the bus to school and the bike to get to the stores, the movie theater or the tennis court. She credits her family's strong agricultural background for her interest in environmental issues.

"We always had gardens and it was a very agrarian environment, so I don't think it was clear to me that I was going to be connected to the environment," she said. "I think it was just organic."

The Internet of Moving Things: Where Big Data meets mobility