The notion of chief sustainability officers inside major corporations is still opaque to most people, even some inside companies that have them. But to those in the sustainability field, the CSO function represents an important touchpoint about the overall field of sustainability: how, and how much, it is being woven into the corporate fabric.

Three years ago, Ellen Weinreb, whose executive search firm, Weinreb Group, focuses on sustainability and corporate social responsibility jobs and careers, took a peek inside the job of the CSO with a report called CSO Back Story. She dubbed it “the first-ever data driven report of its kind concentrating on analyzing and encapsulating the essence” of the CSO role. Among the commonalities she found was that CSOs were “business veterans who are good at leading new initiatives, cross-functional teams, and understand how to translate external factors into internal opportunities.”

Now, she's updated that research. The latest report (download) “explores the evolution of the CSO role across industries,” again taking the pulse of the profession.

Among her latest findings: the CSO role “is now increasingly tasked with delivering collective benefit,” both internally and externally. “To achieve this, CSOs are enlisting support across departments and functions, and building strong governance structures. Today’s CSOs are orchestrating company-wide CSR efforts.” In other words, woven into the corporate fabric.

That is leading CSOs to stretch themselves a bit, delving into parts of the organization that may not be their traditional sweet spot. Said Weinreb, who writes the Talent Show column for GreenBiz on sustainability professionals: “With businesses increasingly embedding CSR across their organizations, a successful leader must demonstrate not only a solid understanding of and background in sustainability systems, accounting and related areas, but also an acute sense of how she can help create value — for her organization as well as social and environmental stakeholders.”

The report covers five shifts that “showcase the ways in which the CSO role has matured, evolved or shown renewed emphasis over the past three years.” They include:

One of the notable findings was a large increase — 50 percent — in women CSOs over the past three years, from 28 percent in 2011 to 42 percent today. “I’m often struck by these photos of the leadership team where you see all men accept for the one woman — and she comes from Human Resources,” Weinreb told me recently. “There are some C-level functions that are seen as more feminine; human resources, for example. I wouldn’t want the CSO to take on a gender stereotype.”

We’re a ways from that happening. Women still represent a minority of CSO positions. And, at the risk of falling into a gender stereotype, there are traits in the CSO role for which women may be more naturally suited — among them, communications, bridge-building, collaboration and deflecting credit to others. And many women come to the CSO role through engineering, finance and science positions, traditionally male-dominated fields, as we've been featuring for years. Doesn’t seem like a gender problem to me.

But it’s not that simple. My colleague John Davies, in GreenBiz’s State of the Profession report, found that “while women constitute 50 percent of sustainability managers and 49 percent of directors, they account for only 37 percent of the vice presidents surveyed." Davies also found “an extreme lack of racial diversity in the profession as well as a significant pay gap for professional women.” 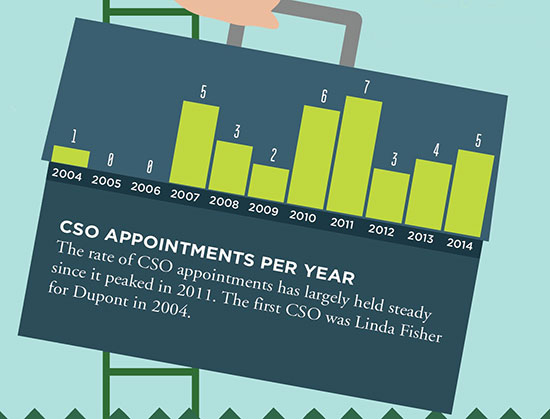 Weinreb’s CSO “back story” contains its own sobering findings. For example, a few companies have eliminated the CSO role since the 2011 report; another, a European company with a strong U.S. presence, moved the position back to Germany. It’s unclear whether this reflects a step forward or backward — whether CSOs disappear because their companies have lost their focus on sustainability, or because their former jobs have become broadly dispersed within the companies. Depends on the company, of course.

From here to obsolescence

Still, it's hard to make a case that CSOs eventually will become outmoded. When sustainability becomes “everyone’s job,” it’s really no one’s job — that is, no single individual who is accountable, or who holds the larger vision of how the company can align its business goals with society's. There’s a good case to be made that someone needs to be in charge. That will be one interesting trend to watch in the next tranche of research on the sustainability profession: not just the macro view of how many companies have CSOs, but also the micro view of where they sit within companies, their reporting relationships, the kind of clout they wield and their budgets and headcount. That will help tell a deeper story about the kind of influence such professionals are likely to have, now and in the future.

Weinreb believes the future seems bright for sustainability execs and discounts those who believe that successful CSOs eventually will work themselves out of a job. “I am of the strong belief that the CSOs play an extremely important role at the helm, steering the ship and staying the course,” she said. “I disagree with those that say they are working themselves into obsolescence.”

CSOs are Everywhere, But Are Their Days Numbered?

3 takeaways on the makeup and purpose of sustainability teams

Is There a CSO in Your Company's Future?