Denis Hayes: From Earth Day to the Bullitt Center

Denis Hayes: From Earth Day to the Bullitt Center

The Seattle Bullitt Center has been touted as one of the world's greenest commercial buildings. Spearheaded by the Bullitt Foundation, which offers grants to organizations working to advance environmental initiatives in the Pacific Northwest, the six-story, 50,000-square-foot building was completed last year and is undergoing certification for the Living Building Challenge — a standard more ambitious than LEED.

To be declared a Living Building, a structure must be self-sufficient for energy and water for a full year and meet standards for the materials used and the indoor environment. The standard also requires that the building helps restore the natural environment.

The Bullitt Center is the brainchild of Denis Hayes, president of the Bullitt Foundation, who has been at the forefront of the sustainability movement since serving as national coordinator of the first Earth Day in 1970. Since then, he has fought countless legislative, cultural and courtroom battles and authored several books and articles aimed at advancing the interests of human, urban and industrial ecology.

Next week at VERGE SF, Hayes will showcase the Bullitt Center and how it embodies the concept of human, urban and industrial ecology. I recently had a chance to chat with Hayes to learn more about the project ahead of his presentation.

Mike Hower: Can you please explain how the Bullitt Center is a 'living building'?

Denis Hayes: The Bullitt Center is an example of biomimicry in the built environment. It more or less functions like an organism. For example, it has a nervous system that senses what the temperature is outside, what the temperature is inside, whether the wind is blowing, what direction it's blowing from, how fast it's blowing, whether or not it's raining, how intense the sunlight is and how much carbon dioxide is built up inside. Just like your autonomic nervous system, the computer absorbs all of this information and plugs it into a few fairly simple algorithms that determine whether the external venetian blinds should be up or should be down and — if down — whether they should be shut or angled upward, whether they are trying to keep heat out of the building or merely reflect light further into the building and eliminate glare. The same system determines whether the windows should be open or shut just like the pores on your body.

Like an ecosystem, the Center gets all of its energy (and in fact, it's net energy positive) from sunbeams that fall on its roof in Seattle. It is a six-story office building that last year produced 50 percent more electricity than it used. It captures rainwater that falls on the roof, filters it, uses it for all purposes, including potable drinking water. It's the first commercial building in America that treats gray water and re-injects it right into the soil and the water table, right inside a city. 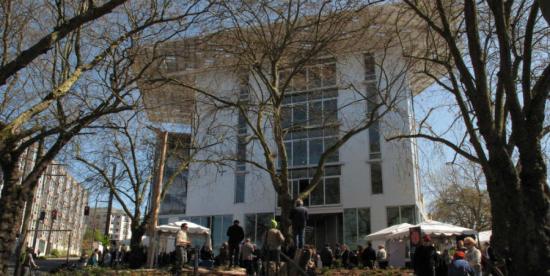 Hower: What other sustainable features does the Bullitt Center boast?

Hayes: We identified 362 materials that are harmful for people and other living things that are common in buildings — things that are carcinogenic or mutagenic or endocrine disrupting or something — and we kept them all out of the building. The facility has composting toilets and uses a flush toilet system that is foaming, so that in a typical flush, it uses less than a half a cup of water. All of the waste is composted right on site. It's the first office building in the United States to be project-certified by the Forest Stewardship Council, which is to say every piece of wood in the building is FSC-certified, so it's from a forest that has much larger buffers around its drains, doesn't cut any old growth, has longer rotation times, doesn't use herbicides and should be able to produce wood 1,000, 2,000 years from now, unlike a typical industrial forest model.

Hower: A key objective of VERGE SF is creating a dialogue between cities and tech companies to help scale solutions that ultimately will help them achieve their sustainability and resilience goals. What do you personally believe it means for a city to be resilient?

Hayes: It means that the city is redesigning itself with an awareness that the world around it is now inevitably changing and will continue to do so no matter what we do for several more decades into the future, as a consequence of changes that already have been made in the atmosphere. A resilient city is able to accommodate those — whether it's floods or droughts or hurricanes or whatever the changing climate throws at it. Resilience in human ecosystems, just as in natural ecosystems, is a measure of the flexibility to endure and prosper, regardless of what challenges arise. 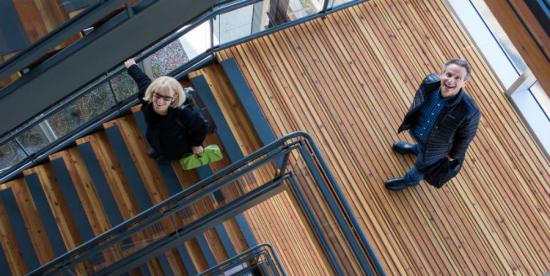 Hower: How do you believe cities can develop successful public-private partnerships and create a marketplace for things such as smart city products and services?

Hayes: There are several things within the city that historically have been and continue to be public sector responsibilities, such as roads, transit, sewage systems, water mains. There are opportunities to privatize some of that, but it's not clear that there is much advantage in doing so, at least in American cities today. But there are a bunch of other places in the built environment, and especially in buildings and cultural institutions that give life and dynamism to a city, where the private sector, if not influenced by incentives and disincentives, will be driven by market forces to something suboptimal. The typical developer, to be financially successful, spends no more than is absolutely necessary to produce a building that will attract the tenants that it's designed to attract. He can then fully lease up the building and flip it, ideally within a year or two, to an insurance company or real estate investment trust. The developer moves on to the next project — so it's about minimizing a building's initial cost, without regard to its lifetime operating costs. That's why, for example, cities have energy codes and fire codes, and why America banned lead paint.

We have an enormous amount of wood in our building; the ceilings are all wood and the substructures of the floor underneath it and the external beams are all wood. It's the first wood beam construction in Seattle for a six-story building since 1927. We paid 10 percent more for all of that wood because it is all from FSC forests. If you're a tenant and you look at it, what you see is simply wood. If you're a structural engineer looking for its characteristics, it has the characteristics of wood. All of the additional benefits accrue to the forests where it came from and to the workers in those forests; none of them adhere to the developer or the tenants in the building. Yet if we want to continue to have forests 1,000 years from now, we need to have something that incentivizes that.

So you can have governments that encourage developers to use wood that is sustainably harvested, either by providing them a swifter path through the regulatory maze or providing them a little bit of additional space on the lot, transferable development rights, some kind of preferential treatment in real estate taxes. There are all kinds of tools available to cities, and they use them for a variety of good purposes. They use them principally for low income housing, but also to bring parks and recreational space into underserved neighborhoods. Some cities insist upon urban art.

Only rarely do cities use their tools to promote resiliency and sustainability. But the same tools should be used for those purposes, in a partnership where the private sector can say that "we would love to do this but we can't make it pencil-out unless we have this incentive." As long as everyone is honest, it can be a pretty productive partnership.

How the Bullitt Foundation created a 6-story living building

How the Bullitt Foundation created a 6-story living building

Building sustainability from the ground up