Sandy beaches, water parks and T-shirt shops draw millions of tourists to Myrtle Beach, S.C., each summer, but officials there think they might have something else tourists may be interested seeing: offshore wind turbines.

“We think that the artificial reef it creates could be another piece of the tourist offerings in our area,” Greg Hembree, a Republican state senator from North Myrtle Beach, said Wednesday at the North American Offshore Wind Summit in New York City. “We see wind as a way to diversify.”

Developers and government officials at the summit said they are optimistic that water-bound wind turbines eventually will catch on in the U.S. as they have in Europe. The Obama administration sees wind turbines in the Atlantic as a way to help tackle climate change by weaning the country’s electric power supply away from fossil fuels.

When will U.S. coastlines get some turbines?

More than 2,300 wind turbines operate off the coasts of 11 countries in Europe, especially in the North and Irish seas, but not a single offshore wind turbine exists in the U.S. today. 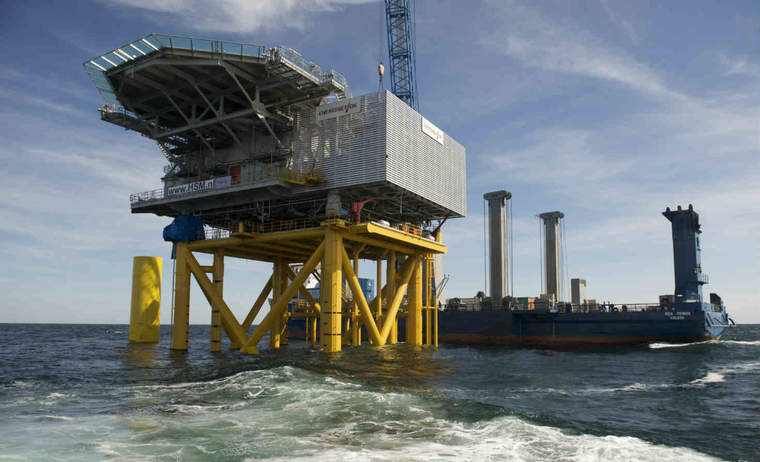 All eyes are on Rhode Island, where construction on the Block Island Wind Farm — likely to become the nation’s first offshore wind farm — is set to get underway this summer. If it is successful, the project could demonstrate the viability of offshore wind in the U.S.

This spring, Dong Energy purchased from the federal government the development rights to 470 miles of open ocean off the Massachusetts coast south of Martha’s Vineyard with the intention of developing a 1 gigawatt wind farm there.

New York is particularly bullish on offshore wind, partly because the state can develop wind power very close to the regions that use the most energy — New York City and Long Island. The U.S. Department of Energy estimates that offshore wind turbines could generate 40 gigawatts of electricity — enough for more than 11 million homes — at maximum build-out along the state’s coastline.

“We’re not that different than the Irish sea,” John Rhodes, CEO of the New York State Energy Research and Development Authority, said. “What we can do here has been done elsewhere.”

Finding ways to clear regulatory hurdles for offshore wind and spark interest among private investors is part of the green energy and climate policy in New York state, Rhodes said. The state is aiming to cut its greenhouse gas emissions 80 percent under 1990 levels by 2050.

The federal government is considering 300,000 acres of the Atlantic to lease for a wind farm off the North Carolina coast, and will start exploring South Carolina’s coast for possible offshore wind leasing later this year.

Virginia scored the nation’s first offshore wind research lease from the federal government in March. The state eventually plans to build a 12 megawatt wind farm there. But that project is “in pause mode” while details can be ironed out, Al Christopher, director of the Virginia Department of Energy, said.

“We haven’t gotten as far down the path as some of the other states,” said Jen Banks, director of operations for the Southeastern Wind Coalition. “The four states in the Southeast have over 80 percent of the (East Coast’s) offshore wind resource more than 12 miles offshore and in shallow water. It’s a great potential.”

One challenge facing offshore wind development in the Southeast is getting people to understand why they should care, Banks said. So far, the wind industry has been drumming up support in the Carolinas by arguing that building wind farms will create jobs.

Hembree said South Carolina’s three major utilities, which likely would take the lead in developing offshore wind there, have been more interested in expanding the state’s nuclear power plants than building wind turbines.

“There’s an interest by our utilities in wind,” he said. “They want that to be in that mix, but they’ve already put their money down on nuclear for the foreseeable future. It makes it tougher for us. The utilities seem to be lukewarm.”

Southern states are talking about offshore wind, but there’s a sense of confusion about what the next step might be in eventually building turbines off the Carolina coast, said Hamilton Davis, energy and climate director for the Charleston, S.C.-based Coastal Conservation League.

But offshore wind in the South could take a cue from the oil and gas industry, which launched a well-executed campaign to reach out to Southern governors to support offshore oil drilling, he said.

“They’ve been effective at coordinating regionally their message and their initiative to bring their industry to that region, and something like that being driven by the wind industry could go a long way towards making a demonstration-scale (offshore wind) project or give us more substantive next steps,” he said.

Can local chambers be catalysts for clean energy?