Not only was 2018 the biggest year on record for corporate renewable energy deals, with more than 6.5 gigawatts of contracts on the books, the furious pace of deal-making — and the creativity of the arrangements — barely slowed during the waning three months of the year.

According to the official figures released in mid-December by the Business Renewables Center (BRC), part of the Rocky Mountain Institute (RMI), the publicly announced capacity contracted over the past 12 months was 6.43 GW.

But that proclamation came the same day as another 100-megawatt virtual power purchase agreement (VPPA) was disclosed by water and energy services company Ecolab. (The deal represents the first big foray for Ecolab, beyond a community solar arrangement in 2015.) Nor does it include several other transactions for which the size was announced using different metrics, such as the contract between Vail Resorts and wind powerhouse Lincoln Clean Energy (now part of Orsted), which totals 310,000 megawatt-hours (MWh) annually, and the unique carbon offsets deal forged between Royal Caribbean and Southern Power.

Either way, the total capacity of deals announced for 2018 was more than double the previous record volume of 3.22 GW in 2015. "These companies aren’t going to wait for public policy on climate issues to catch up — they are taking the initiative to accelerate toward a prosperous, low-carbon economy," said RMI CEO Jules Kortenhorst in a statement.

The run rate for the fourth quarter was slightly higher than the total disclosed during the first quarter, another active three-month period, based on previous editions of the Clean Energy Deal Tracker. According to the data compiled by GreenBiz and BRC, the deals publicly disclosed from September to December accounted for more than 1.75 GWs of capacity. 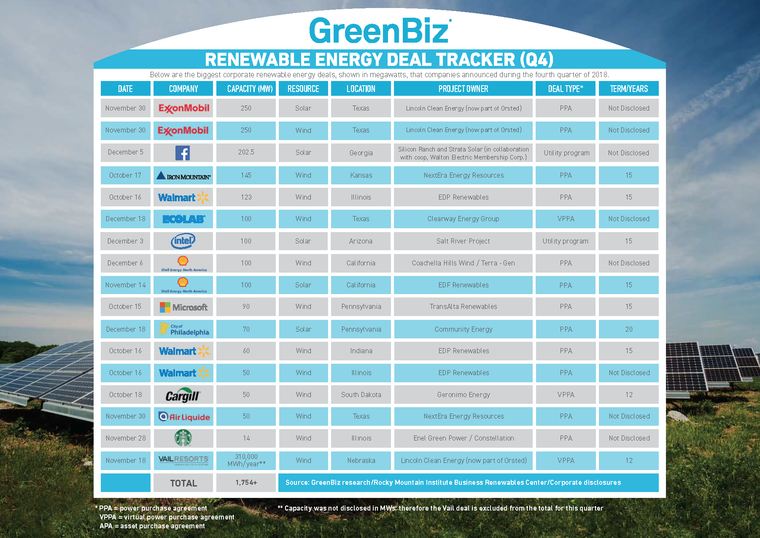 That deal propelled ExxonMobil into the top five buyers club for 2018, along with social media company Facebook, telco AT&T, retailer Walmart and software firm Microsoft. Facebook contracted for more capacity than any other organization last year, with deals totaling 1.85 gigawatts, "while also breaking all buyer cumulative annual procurement records since deals have been tracked," according to the BRC deal tracker.

The quarter also brought some significant new buyers into the fold. Food and agriculture company Cargill disclosed its first VPPA for 50 MW of capacity of wind power from a project under construction by Geronimo Energy in South Dakota. The 12-year contract covers about 25 percent of the power that will be generated by the farm; the rest of the capacity was accounted for by a deal with Walmart announced last April.

The company has committed to reducing its absolute greenhouse gas (GHG) emissions by 10 percent by 2025, compared with a 2017 baseline. The VPPA will get it about 10 percent of the way there, according to the press release.

At this pace, we anticipate a fourfold increase in corporate renewables procurement by 2025.

Another highlight was a deal by a municipal buyer, a 70-MW solar agreement signed by the city of Philadelphia to cover about 22 percent of the electricity required by its government buildings. The deal with Community Energy represents the largest solar installation in Pennsylvania — by sevenfold. Philadelphia is buying all of the power that will be generated by the site, about 156,000 MWh.

According to that data, corporate renewable energy purchases have stimulated more than 15 GWs since 2013 — and that doesn’t account for dozens of smaller deals (BRC has traditionally tracked contracts larger than 10 MWs) or PPAs related to on-site solar or wind installations.

"At this pace, we anticipate a fourfold increase in corporate renewables procurement by 2025," said Miranda Ballentine, the new CEO of the Renewable Energy Buyers Alliance, in a statement. "There is a tremendous amount of good work yet to be done, and we are counting on the power of partnership to get there."

The high-level mission of BRC is to help companies procure 60 GWs of renewable energy by 2030. We’re now officially a quarter of the way there.

Not your average buyers

All in all, there were more than 75 transactions logged by the BRC last year — and that’s just what was announced publicly.

Perpetuating the tradition of big technology companies doing big deals, three of the largest agreements in the quarter were from companies in the high-tech world.

The largest came from Facebook, in the form of a contract for more than 200 MW of solar power sourced from Walton Electric Membership Corp., a coop that serves a 10-county service area between Atlanta and Athens, Georgia.

The electricity will serve the company’s 970,000-square-foot data center being built in Newton County. It represents the largest solar development project in the state, encompassing three sites being developed by Silicon Ranch (Shell is a majority investor) and Strata Solar. The partnership represents the largest deal of its kind from a distribution coop, according to the National Rural Electric Cooperative Association.

One of the more compelling features of the projects is their proximity to the same electric grid on which the new Facebook data center will be powered, noted Rachel Peterson, vice president of data center strategy for Facebook, in a statement.

Indeed. The company, which has pledged to power its operations entirely with clean energy by 2020, prioritizes local impact. It was instrumental in developing a green tariff in Nebraska last year, and went to great lengths to negotiate arrangements for its facilities in Utah. In that regard, its strategy is differentiated somewhat from other big buyers from the tech community, such as Google and Microsoft.

Iron Mountain, the big information management services company, also made its mark in the fourth quarter with a 15-year PPA for 145 MW of wind energy from an installation in Kansas being developed by NextEra Energy Resources.

As a result of this deal, Iron Mountain can say that 75 percent of its overall operations are powered by renewable energy; the company has set 2050 as the deadline to reach 100 percent.

"What is especially exciting is that, with this agreement and the achievement of other milestones, 100 percent of our data center business now operates on renewable electricity," said Kevin Hagen, vice president of environmental, social and governance strategy at Iron Mountain, in the press release about the deal. "When you consider the sheer amount of electricity required to power our entire operational portfolio, it's truly remarkable to hit these goals in a ‘business-positive’ manner that leverages renewable energy to help us reduce utility expenses, stabilize rates and reduce the business risks associated with fossil fuels." 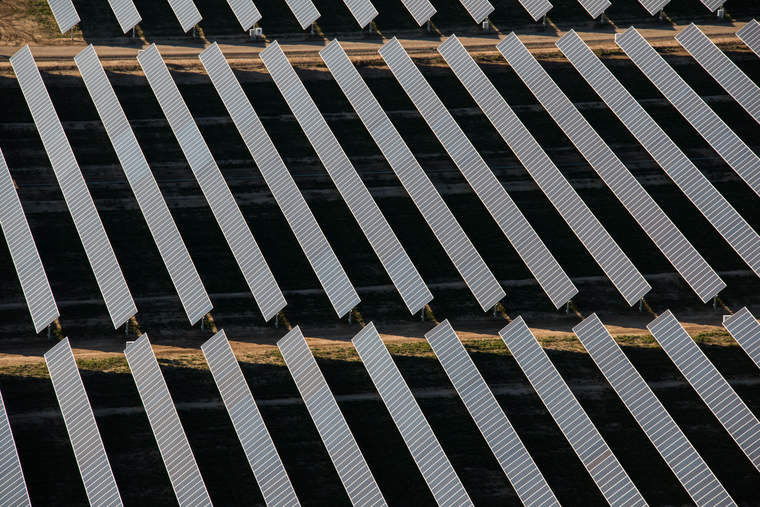 Salt River Project
A 100-MW array in Eloy, Arizona, will support Intel's growing Chandler facility. This photo is of a sPower Sandstone Solar facility in Florence, Arizona.
Intel also continued its long-time support of clean energy through a 100-MW, 15-year agreement with Arizona utility Salt River Project — the largest power provider in the Phoenix metropolitan area. The electricity from a new solar plant in Eloy, Arizona, will support the company’s campus in Chandler, one of the largest semiconductor manufacturing facilities in the world.

Intel has made substantial investments in onsite installations — featuring a variety of technologies from renewable energy credits (RECs) to Bloom fuel cells to solar photovoltaic arrays — and this deal is somewhat of a departure. "This effort helps support our portfolio approach to use a greener and more sustainable energy supply," said Marty Sedler, director of global utilities and infrastructure for Intel, in the press release announcing the deal.

Being flexible is, indeed, a hallmark of corporate renewable energy procurement teams. It requires tenacity and ingenuity. More often than not, a strategy will be highlighted by many smaller arrangements that are appropriate for specific facilities or regions.

One example is the agreement announced during the fourth quarter by Enel Green Power, Constellation and Starbucks. Under the arrangement, power company Constellation is building the power generated by a 14-MW slice of an Illinois wind project and reselling it to Starbucks on the local grid. The energy will power more than 340 company-owned stores in the state, including a future roasting facility in Chicago.

As a result of the deal, Starbucks figures it supports about 48,000 MWh of clean energy close to its retail communities.

Similarly, Vail Resorts is counting on both solar and wind electricity contracts to help reach its goal of 100 percent renewables by 2020. Locally, it is working with Xcel Energy to bring solar power online in Colarado, and sponsoring Rocky Mountain Power’s bid in Utah to add more than 308,000 MWh of renewables including solar, wind and geothermal resources.

The wind deal Vail Resorts signed with Lincoln Clean Energy in November was necessary, however, to help cover its recent acquisitions of four resorts. "While we continually work with local, state and federal governments and utility partners to find ways to source renewable energy in the markets where our individual resorts are located, this wind power purchase agreement allows us to make a measurable impact on climate change — and its effect on the planet — within just a few years," said Rob Katz, chairman and CEO of Vail Resorts, in a statement.

One of the most creative deals announced in the quarter is a collaboration between Royal Caribbean Cruises and utility Southern Power.

What made the cruise line’s task tough is that most of its energy footprint is related to consumption of fuel at sea, rather than electricity used for onshore operations. When the company began evaluating its renewable energy procurement, it realized that opting for a PPA such as those highlighted in the BRC’s deal tracker would be difficult.

The Royal Caribbean team could have invested in RECs, but it wanted to have a more tangible solution. Its answer came in the form of a 200-MW, 12-year-long arrangement with Southern Power in Kansas. It’s the first of the utility’s projects to be certified under the Verified Carbon Standard, meaning that that installation was vetted more rigorously for environmental metrics than traditional RECs.

It took the cruise company almost two years to help the arrangement set sail, Nick Rose, director of environmental programs for Royal Caribbean, told me. "We would love to be a pioneer in a space that allows a more traditional [transportation] company to do this," he said. "Any time you can help put green energy on the market is a good thing."

Apple, Akamai, Etsy and Swiss Re get together to buy clean power