On March 22, Rocky Mountain Institute’s Shine Program released a request for proposals (RFP) for community-scale solar on behalf of a group of rural electric cooperatives in eastern and northern Colorado. The RFP was part of RMI’s ongoing work to develop the community-scale market nationwide.

Nearly 30 developers responded to the RFP, providing highly competitive bids. Prices for solar power purchase agreements were lower than the value of solar to the co-ops, and so solar is expected to result in economic savings for participating co-ops.

RFP results confirm that we have crossed a significant tipping point where distributed solar is not only a means to supply green energy and to promote regional economic development, but also an opportunity to decrease energy costs and to drive down bills for price-sensitive energy consumers. The Colorado RFP outcomes are informative to utilities nationwide, but particularly to co-ops and municipal utilities in Colorado and neighboring states that are contemplating solar development and are interested in joining a regional procurement opportunity.

The price is right

In the request for proposals, RMI solicited prices under a power purchase agreement (PPA) structure. PPAs are a popular model for co-ops and municipal utilities to contract for solar for a few reasons:

The co-ops participating in the RFP solicited prices for 12 projects ranging from less than 1 MW up to 5 MW. Aggregate demand from the co-op group was around 15 MW, but the group recognized the opportunity for the portfolio to grow if additional interest was identified in the region.

The chart below shows the distribution of PPA offers by portfolio size for a 2 MW project in eastern Colorado. All bids were made comparable by providing a set of common underlying assumptions (such as cost of land and interconnection) that all developers used. 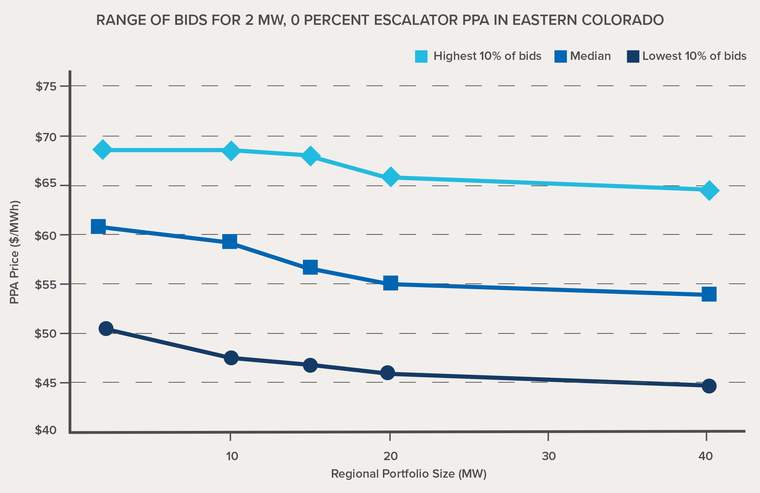 And because the lowest-price bidders to the PPA also were reviewed and found to be highly qualified, RMI expects final prices to be at or below the lowest 10 percent bar.

What’s the value to co-ops or munis?

Co-ops and municipal utilities (munis) pursue solar on the distribution grid for a variety of reasons. These include to:

The economic rationale is growing stronger, as the responses to this RFP show: every single utility that participated can save money through distributed solar. Naturally, the value of the installation to a co-op or muni depends on the alternative cost they would have paid without the solar power.

Co-ops and munis are typically served by larger utilities known as generation and transmission providers (G&Ts), so the value of solar depends on the G&T’s rate structure. In theory, the avoided cost is defined by the wholesale market price plus a transmission grid fee, and most rate structures mimic such a structure. The alternative cost is thus dependent on the regional wholesale market, which, in turn, is often contingent on the dominant source of power. For co-ops in Colorado served by Tri-State G&T, the price-setting source of power is coal based, so the wholesale price can be proxied by the cash cost of coal power generation.

However, some locations — as with all co-ops operating under Tri-State — have a well-defined crediting scheme, which makes investment decisions less complex and risky for the G&T’s members, who are also its owner. This crediting structure is often referred to as a "feed-in tariff" (FIT).

The chart below shows the present value over the full PPA contract (25 years) of solar from a 2 MW array compared with the feed-in tariff under Tri-State policy 115; and the cash cost of coal generation plus avoided transmission costs. 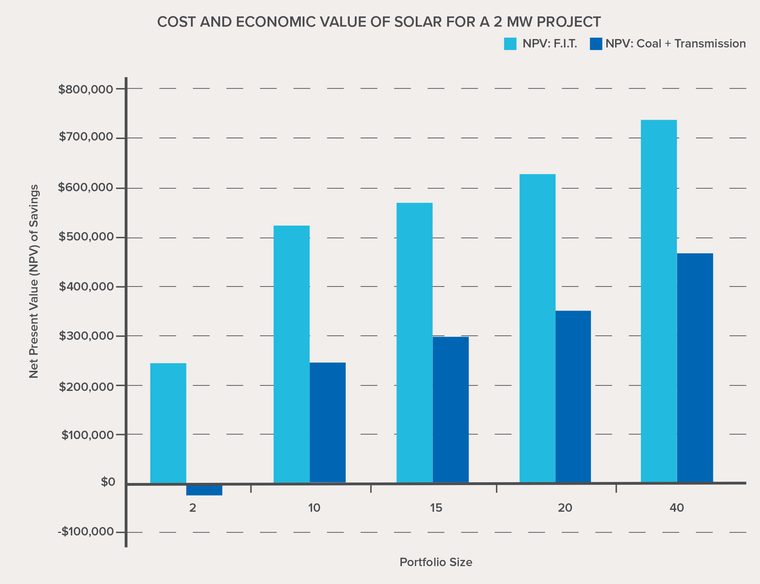 To further emphasize how valuable these contracts are, it is worth noting that the solar PPA prices in this analysis are based on a "0 percent escalator," which means that the price stays nominally constant throughout the 25 years. In the same time period, the U.S. Energy Information Administration projects that the cost of delivered coal power will increase by 2.4 percent per year (assuming 2 percent annual inflation). As the chart below shows, this means that even without accounting for the cost of transmission, the solar installations will break even with coal power partway through the contract period. 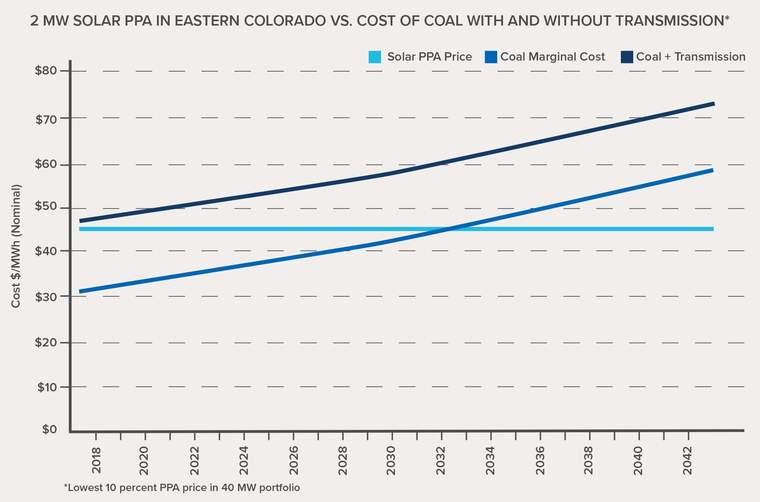 These results show a clear opportunity for many utilities and energy end-users to save money through community-scale solar. RMI’s Shine program is pursuing this opportunity in New York state, Colorado, Texas, New Mexico and the Southeast.

For co-ops and municipal utilities in Colorado and neighboring states, there is an immediate opportunity to join in the ongoing procurement process and access solar prices close to $.045/kWh on the distribution grid. RMI and the participating co-ops have selected a short list of highly qualified and cost-competitive vendors to provide firm and final bids to the RFP. At the same time, RMI and the co-ops are inviting co-ops and municipal utilities in Colorado, southern Wyoming, western Nebraska and western Kansas to participate in the buyer group, as the initial bids indicate that a larger group of buyers can move the price down further.