Engie, University of Iowa say 'I do' to 50-year, $1 billion+ partnership

Engie North America just landed the largest public-private partnership in Iowa’s history, signing a 50-year agreement with the University of Iowa (UI) to manage the campus’ utility system in a deal valued at more than $1 billion.

Under the partnership, the North American arm of the French multinational energy company will operate the school’s energy and water utilities, as well as take responsibility for meeting the campus’ energy transition goals.

The relationship is the latest example of partnerships in which institutions are turning to service providers for help with the strategy and financing for infrastructure upgrades. Engie inked a similar arrangement with Ohio State University two years ago, and representatives from the energy service provider say they’re looking at similar partnerships with other institutions, companies and municipalities.

Here are three takeaways from the deal:

1. Energy technologies are changing quickly, and it’s hard for organizations and utilities to keep up. That’s a business opportunity for service providers.

In the last decade, a surfeit of new energy technologies have emerged to help organizations decarbonize and meet climate goals.

For many organizations, though, upgrading energy systems can seem daunting. There are so many new technologies and services — how does an organization make the change? What if it picks a service or technology that doesn’t deliver? Who will be responsible if a capital outlay doesn’t pan out?

The growing complexity is leading to the rise of organizations with expertise in energy management, such as Engie, Schneider Electric and EDF Energy, which can strategize a decarbonization strategy and iterate.

The growing complexity is leading to the rise of organizations with expertise in energy management, such as Engie, Schneider Electric and EDF Energy.

"We see the start of a megatrend here," Gwenaëlle Avice-Huet, executive vice president of Engie’s renewables global business line, told GreenBiz. "We see many entities — universities, hospitals, municipalities, commercial and industrial — that are launching some process to partner with [energy service providers]. Why? Because most of the time they don’t know anything about how to invest, how to decarbonize, where it makes sense and where it has the most impact. So they want a [service providers] to bring that competency and to bring the financing."

These services are emerging as more organizations are committing to more ambitious decarbonization and climate targets.

Here’s the structure of the deal: Engie and Meridiam, a global long-term energy infrastructure investor, will make an upfront payment to the university of $1.165 billion.

This immediate cash infusion has a couple of financial upsides for the university.

First, the university-owned utility owes $166 million in bonds and consulting fees from a new power plant, which threatened to raise electricity rates for customers. Second, the rest of the money will go into an endowment, which University of Iowa President Bruce Harreld said can be invested to generate $3 billion over the 50 years. That pot of money will give the university $15 million annually to execute its "strategic plan," which includes priorities such as improving research and student retention.

In return, the university will pay Engie and Meridiam $35 million per year from the endowment (to increase by 1.5 percent annually after year five), guaranteeing the investors will make back all of the upfront investment with modest interest.

The money also will go to establish a nonprofit to manage the utility, of which Engie and Meridiam will be 50/50 partners. Operating costs, personnel and system upgrades will be paid by the university. 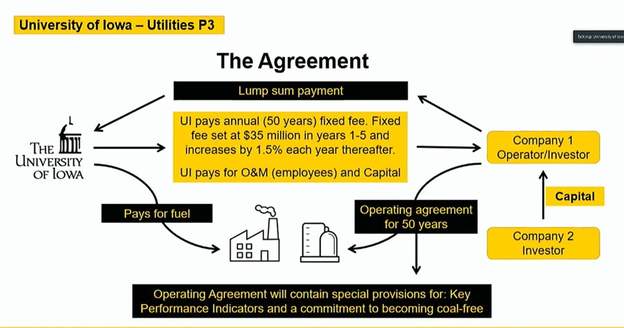 In other words, Engie is financing, designing and managing the system upgrades, which the university is betting will make them more financially sound.

The agreement is a long-term play for both Engie and the university, and it will be decades before we know if the bet pays off.

It’s already been hit with some criticism, including from state Sen. Joe Bolkcom (D-Iowa City), who thinks the contracting process has moved at "breakneck speeds" without enough transparency. Bolkcom called the long-term deal "exotic and possibly risky financing," and he lamented the privatization of services in a public institution.

Still, as deferred maintenance and aging infrastructure strain energy systems across the country, the model is attractive to a growing number of institutions that lack the liquidity for needed upgrades.

So far, this sort of partnership appears to be working for Ohio State University, which has been working under this arrangement with Engie for more than two years. Reports indicate the school has seen steady improvements in energy management and sustainability program.

By signing a 50-year agreement, Engie has the breathing room to think of technological advances in decades, not years.

Per the agreement, Engie will help the university phase out coal from its on-site power plant in five years. The company has stated its intention to work with the university to transition towards a zero-carbon footprint.

How will it achieve zero-carbon operations for the university’s two campuses, which span 1,700 acres and includes an internal hospital? Engie doesn’t know — yet.

Although the service provider has yet to create an action plan for the UI campuses, it plans on including onsite renewable generation, energy storage, lighting upgrades, microgrids and a digital dashboard to manage its energy resources.

Plus, Engie is banking on cleantech innovation continuing to become cheaper and better to enable clean energy goals that seem beyond reach with today’s technologies. But in 50 years, Engie could imagine a path to a zero-carbon campus and perhaps even 24/7 clean energy generation.

"Our responsibility, as I see it, is to propose new technologies to the partner, and over the concession there will be more technologies coming," Avice-Huet said. "I can’t tell you exactly what will be the mix of technologies, but our intention is to offer always the best technology available in the market. Starting with the elimination of coal."