Sometimes leadership arises from impatience. In Fort Collins, Colorado—a city known for its pragmatic, can-do attitude—getting on with the business of reducing greenhouse gas emissions doesn’t have to wait for international treaties, federal mandates or carbon taxes. This month, the Fort Collins City Council voluntarily adopted revised climate action goals that rank among the most ambitious of any city in the world.

Under the new goals, the city aims to reduce its total greenhouse gas emissions 20 percent by 2020 and 80 percent by 2030 across all sectors relative to 2005 levels. The latter goal is a full 20 years sooner than the “80 by ’50” goal conventionally set by other leading cities. Fort Collins also aspires to reach carbon neutrality by 2050.

These new goals aren’t just some politician’s pipe dream. The Council’s vote brought to fruition a multi-year process that has engaged community leaders, local businesses, citizen advisory groups, the communities’ generation and distribution utilities and other partners, including Rocky Mountain Institute and eLab. Together they evaluated the risks and opportunities of alternative approaches to reducing carbon emissions. 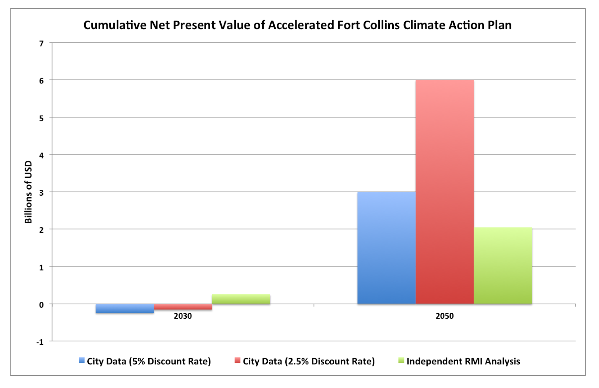 RMI2015
Estimates of the accelerated climate plan's value to Fort Collins vary, but all of them measure in billions of dollars.
Those approaches have been subject to discussion, analysis and review that have laid the groundwork for real actions, led by city government and Fort Collins’s municipal utility, to stimulate hundreds of millions of dollars of new investments in efficiency and renewables in the years ahead, bringing substantial cumulative net benefits to the community ranging from a conservative $2 billion to potentially more than $6 billion by 2050.

And while this process has not been easy—discussions have unearthed stakeholder differences, and the real work of implementation lies ahead—it has created something valuable: a plan that focuses on community investment and social well-being producing net financial benefits. Indeed, RMI’s independent analysis demonstrates these investments will begin producing real financial benefits to the community close to 2030.

It started with one district

The road to this landmark city council vote officially adopting the accelerated climate target has been long in the making, beginning in 1999, when the Fort Collins City Council passed a resolution committing the city to reducing its  greenhouse gas emissions significantly by 2010. However, community stakeholders were concerned that Fort Collins was not on track to reach such goals, and The Fort Collins Sustainability Group initiated a resolution for the city to form a climate task force.

This resolution passed, and the task force began the process of developing recommendations. This task force was put in place in 2007, and in the same year, a coalition of business and city leaders came together to create a plan for FortZED, a zero-energy district planned for Fort Collins’ downtown business district and the Colorado State University campus.

The FortZED project attracted an $11 million federal grant to support the development and testing of grid control systems for local load management. More important, it created a foundation for sustained dialogue between CSU, the City, Fort Collins Utilities and local businesses.

This dialogue has continued well past the expiration of the federal grant, under the umbrella of the Colorado Clean Energy Cluster, a nonprofit economic development corporation focused on supporting the state’s clean energy companies through public and academic partnerships.

Expanding goals across the city

Then in 2012, RMI’s e-Lab—of which Fort Collins Utilities is a founding member—facilitated a charrette with community leaders, local businesses and outside experts to explore what could come next for FortZED and Fort Collins. That sparked a dialogue about accelerating city-wide energy goals.

As a followup to this charrette, RMI collaborated with Fort Collins Utilities to assess the costs and benefits to the community of accelerating the city’s greenhouse gas emissions goals to achieve 80 percent reductions by 2030. This analysis culminated in the report Stepping Up: Benefits and Cost of Accelerating Fort Collins’ Energy and Climate Goals.

Based in part on the Stepping Up results, Fort Collins’ city council asked city staff to work with a broadly-based citizens advisory committee to develop a climate action plan to achieve accelerated goals of 80 percent emissions reductions by 2030 and carbon neutrality by 2050. This process led directly to the Council’s historic vote this week to formally adopt the new goals.

A mere 15 years away from today, this aggressive goal—two decades faster than RMI’s own vision for a national energy transformation outlined in Reinventing Fire—was made possible by several national and local opportunities. Macro trends such as faster-than-projected cost declines for key technologies such as solar PV, wind, and electrified transportation, coupled with new financing models, enable accelerated customer adoption. Locally, Fort Collins can take advantage of smart urban planning applied to an already-strong growth rate, as well as a business community that cares about the city.

For a city of just over 150,000 people, the scale of both the investments required and benefits to be achieved are large, underscoring the reality that while a clean-energy economy is substantially beneficial over time, the upfront capital requirements are significantly higher than business as usual. Not surprisingly, then, financing is a key part of Fort Collins’ strategy.

Financing will take place at many scales. For example, the utility will require financing to invest in clean central generation, and the city will require financing to invest in infrastructure upgrades. But perhaps most critical for a community of Fort Collins’s makeup will be the ability for customers to make investments for their homes and offices.

Fort Collins’s building stock is responsible for 53 percent of emissions, and efficiency investments can do much more than lower those emissions: They improve comfort and health, increase home values, and add vitality to neighborhoods. However, home and office retrofits are challenging to scope and complete; as a result, adoption rates are often quite low. 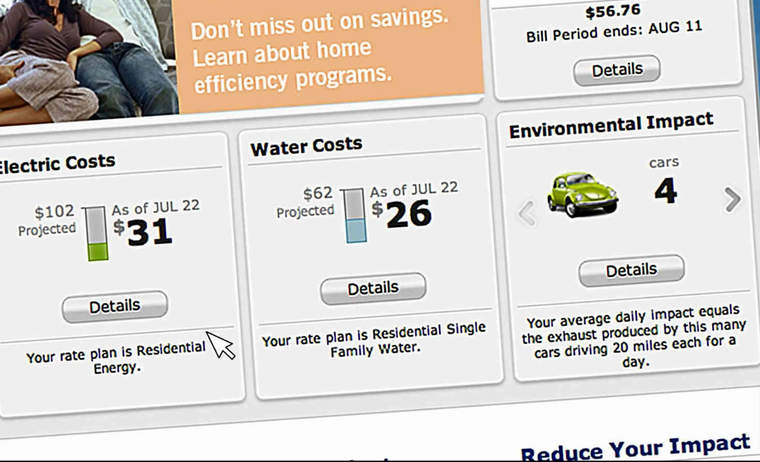 Fort Collins Utilities is already playing a central role enabling distributed investments in the community’s buildings while catalyzing energy efficiency adoption. It recently approved an update to its on-bill financing program that allows unprecedented access and flexibility for financing efficiency, including the ability to allocate costs (with permission) between tenant and landlord, longer financing terms that match the life of the upgrades, lower interest rates and an easier approval process.

A more ambitious approach being considered—the integrated utility service model developed with RMI’s support—would allow the utility to centrally deliver energy services (efficiency, distributed renewables and value-added services) in the same way it currently delivers electricity: at scales that will achieve cost savings, with high-quality service, and be paid for on customers’ electricity bills. This approach, if adopted, could allow the utility to diversify its business model while providing new services to customers and playing a pivotal role in the community’s energy transition.

To achieve its new goals by 2030, Fort Collins has outlined a diverse menu of strategies and tactics to reduce building emissions by 40 percent through greater efficiency and distributed solar adoption, reduce carbon emissions from the utility electricity system by 79 percent from 2005 levels, reduce transportation carbon emissions by 57 percent from 2005 levels, and create a zero-waste community.

A few key themes make the city’s approach especially exciting, including a focus on investment locally (rather than through purchases of RECs for example) and a rigorous focus on costs. While it might be tempting for communities to look at solving their energy challenge by relying exclusively on their utility, the Fort Collins approach includes a significant community component, including distributed renewables, a focus on neighborhoods and “smart growth” and investments in efficiency at the home and commercial scale.

Driving down costs through scaling is also a key part of Fort Collins strategy. For many of the carbon emissions reduction tactics planned, implementing at scale, through coordinated, integrated neighborhood and citywide campaigns, will help to reduce costs. Indeed, city-level procurements of solar, such as the popular Solarize campaigns as well as direct city procurements such as SF SunShares, have shown dramatically lower costs and higher adoption rates. The same is likely true of efficiency investments like those contemplated in the proposed integrated utility services model.

For those looking to learn from Fort Collins’ approach to achieving far-reaching goals, there are four main building blocks to focus on:

In the meantime, this week’s vote in Fort Collins sets a new standard for community climate action. If the journey of a thousand miles begins with a single step, this Northern Colorado city just stepped up and took a big leap forward toward climate action that makes others look like they’re simply shuffling their feet in comparison. Regardless of whether others soon follow in Fort Collins’ accelerated footsteps remains, those of us closest to the city will watch closely with eager excitement to see what happens next.

Why transformation of the U.S. electricity system is critical