How Internet of things startup Verdigris gives buildings a voice

While many next-generation appliances, thermostats, air-conditioners and so forth are born "smart" — capable of sharing data about their energy consumption or operational status — the reality is that much of the equipment running existing buildings is still pretty dumb.

At least in the sense that it can’t readily communicate the same sort of information easily, in a way that’s easy for humans to interpret.

Tech startup Verdigris wants to give those systems a voice using easily installed wireless sensors and a cloud monitoring service that relies on artificial intelligence to pinpoint patterns that could be reasons for concern.

Unlike some other players attacking this problem, the Verdigris approach doesn’t require a huge capital expense. It costs around $100 to $150 per month, depending on the equipment being monitored and the depth of the data being studied, according to Verdigris CEO and co-founder Mark Chung, an electrical engineer by training.

That price point has proven appealing for both small hotels, such as the Orchard in San Francisco, and far larger companies including software firm Autodesk, manufacturers Jabil and Honeywell and hospitality giants Hyatt, Marriott and Starwood. So far, the company believes it has helped its customers save "tens of thousands to millions of dollars annually on energy costs."

Its Einstein sensors are clamped directly on electrical panels, which means building owners don’t have to disturb existing office space.

While it is a relatively small company with about two dozen employees, Verdigris also has attracted some pretty impressive backing. So far, it has raised $16 million in venture funding including a big round led by Jabil (yes, also a customer) and Verizon Ventures in October.

"Verdigris has allowed us to much better understand the drivers of our energy consumption and how we can minimize our demand," said Joe McGee, executive vice president of planning and development at Jabil, on the company’s decision to become an investor.

The company’s big pitch is simplicity — its Einstein sensors are clamped directly on electrical panels, which means building owners don’t have to disturb existing office space. The data they collect is streamed to the Verdigris cloud service, where it analyzes patterns. Once someone acts on that information, average reductions in energy consumption range from 8 percent to 22 percent.

"Many of our customers start with one site," Chung said. "They convince themselves that this is a valuable endeavor, using that as a proving ground." 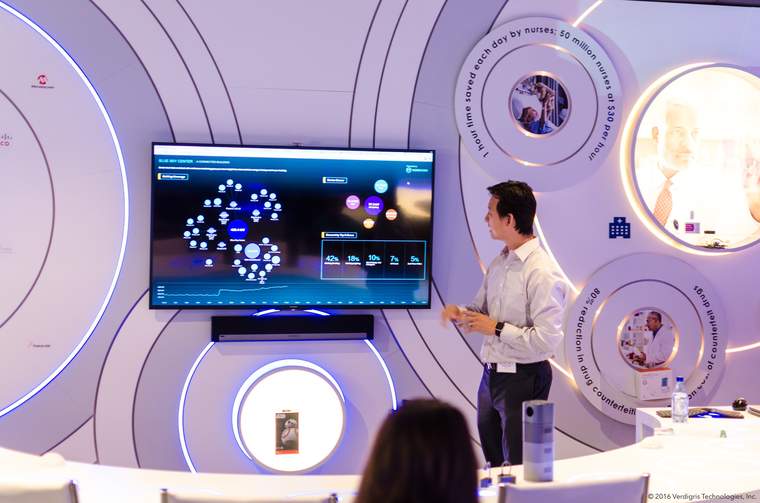 Verdigris
<p>Electrical engineer Mark Chung, co-founder and CEO of Verdigris, originally developed the technology to figure out why his personal electricity bill was so high.&nbsp;</p>

That’s how things played out for Orchard International Group, which manages two boutique properties with about 190 guest rooms combined. General manager Juan Bueno said he started using the Verdigris technology to keep tabs on maintenance needs more proactively. The energy management benefits came early on, when the software detect an erratic operating pattern for one of the hotel’s chillers, which was shutting off and on every 10 minutes for no apparent reason. "We were able to inform our refrigeration partner that there was an issue. We were able to implement an action plan rather quickly," Bueno said.

The savings in power consumption from fixing the problem were minimal, but the expense of replacing that equipment had it failed would have been $180,000 to $200,000, he noted. The hotel’s maintenance person now watches the data in near real time to avert issues. "It may shed light on something we could be doing differently," Bueno said.

Verdigris has integrated its service with building management technology from powerful suppliers such as Honeywell, Schneider Electric, Siemens and Johnson Controls. That means someone could program those systems to take action based on data shared by the Verdigris cloud services.

The savings in power consumption from fixing the problem were minimal, but the expense of replacing that equipment would have been $180,000 to $200,000.

Chung’s motivation for founding Verdigris was personal. When his electricity bill jumped from an average of $110 to $560 one month, he created a monitoring system to help discover the cause. "I realized this was way too hard for people to do," he said. The company was incubated at the NASA Sustainability Base in Mountain View, California. Indeed, the building was used to "train" the Verdigris software’s artificial intelligence brain.

While he won’t disclose Verdigris’ customer totals (although it looks like it had about 50 when it was funded in October), many of the company’s early adopters are in densely populated cities such as Chicago, New York, Boston and San Diego or states that have strong energy efficiency mandates or really variable electricity pricing, including Florida and Texas.

"It can pay for itself rather quickly," Chung said.

The 'Internet of Soil' gets a boost from sensor makers Bosch, Flex

Welcome to the roaring 2020s, the artificial intelligence decade