Amid recent attention to the transportation emissions of the urban core — with the US and China announcing a "race to zero emissions" in electric bus deployment and California issuing $23 million in grants for manufacturers to build EV big rigs for ports — there’s also the private sector idea of sharing technology.

Something is needed to spur adoption of electric or zero emissions buses and heavy-duty vehicles in cities. Cities are the origin of 70 percent of the globe's carbon emissions, according to the U.N., and cars and trucks and buses account for about a fifth of total US emissions. But prices remain cheap for diesel petroleum and natural gas, creating little incentive to change.

The United States has been particularly slow to adopt to electric buses. IDTechEX reports that the world’s largest electric bus producer BYD, shipped 6,250 electric buses in 2014 in China alone. But IDTechEx reports in its Electric Buses 2016-2026 forecast that, as of 2013, less than 0.4 percent of the 70,000 buses in the U.S. were powered by pure electricity.

Proterra hopes to change that by opening its patents. “When we make any big decision, the first question we ask ourselves is what is going to be the most beneficial for widespread adoption of urban electric vehicles?” said Proterra's CEO Ryan Popple in an interview with GreenBiz about deciding to open the patents.

Dozens of cities have deployed some electric buses, according to CALSTART, an organization that advances clean transportation. But typically these cities have just a few such buses, as pilot programs. 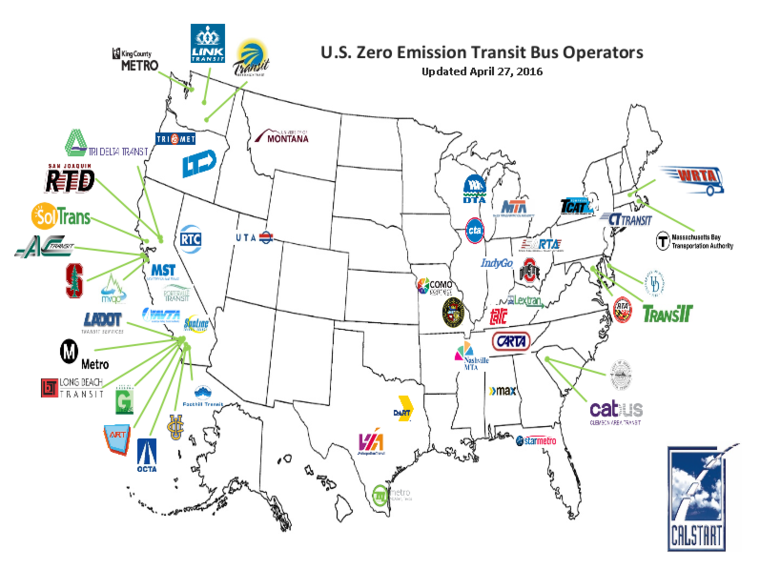 Nonetheless, said CALSTART President and CEO John Boesel, EV technology has made more inroads in city transit than in trucking or other heavy duty vehicle sectors.  So whatever could catalyze the spread of technology would be helpful.

California, thanks to its legislated carbon emissions reduction requirements, has more EV transit buses deployed than any other state and CALSTART has aggressive goals.

Still, the challenges are big; most notably in getting charging infrastructure out there.  So that is where Proterra's strategy could be a change maker.

"I view buses as a starting point for electrification of urban heavy duty vehicles but we have a lot of other things we need to get off diesel if we are going to have healthy cities and a carbon strategy that works,” Proterra's CEO said in his interview with GreenBiz.

“One way to go faster in moving away from fossil fuels is to be able to make one investment and use it across number of industries, so I think our basic fast charging technology should be shared by buses, trucks, taxies.” he said.

Proterra doesn’t want to go into the truck or taxi manufacturing business, he said. Moreover, it would be happy to have some real US based competitors in the electric bus market to solidify what is a very nascent market.

Proterra's patents it is releasing.

The US has the added challenge of the cultural affinity for cars over public transit.  Municipal bus agencies are typically fairly strapped operations.

But buses need replacement every 12 years and Proterra is making steady progress demonstrating to transit agencies that its buses are a better financial deal over the life of a bus than a diesel bus. Once you buy an electric bus, you don't have to buy any fuel, which is a $250,000 to $300,000 in fuel savings in diesel fuel costs over the 12-year life of a typical bus, Proterra figures.

Every major city with the exception of a few laggards is implementing an EV transit strategy.

"This is a market that took five years to convince and educate and prove through performance," of the merits of electric buses. "We are on the other side of that now. Every major city with the exception of a few laggards is implementing an EV transit strategy." The company has deployed buses or has orders with 27 cities.

Moreover, it is manufacturing at full tilt, producing all that its existing facility in South Carolina can churn out in a year, which is 50 buses. So it is building a second, even larger factory in Southern California, to answer pent up demand. But still, even if that triples its manufacturing capacity to 150 a year, as projected, it will still take decades for the nation's bus transit fleets to transition to all electric. Global warming can't wait that long.

He said Proterra fills roughly 2 percent of the annual orders of transit buses in the United States. That means cities are also still buying traditional diesel and compressed natural gas buses.  A hold out could well be charging.

"One reason why EVs have such a daunting challenge in competing against fossil fuels is that the fossil fuels effectively have free infrastructure all over the country in — they have 200,000 gas stations that were paid for by oil companies two decades ago," he said.

Of the various technologies it has developed for its lightweight electric busses, Proterra views its Single Blade fast charging technology and interface as the technology that, if deployed more widely, might spur more EV adoption.

It enables a large city bus to pull up to a stop and, while passengers are boarding, get an 8 to 10 minute charge for another 30 miles of driving.  Their deployment means a bus can stay in service all day without needing a time out to recharge.

Here's a video of how it works:

It's not an altruistic move. Proterra was asked by a competitor's customer to adapt its fast charging apparatus to the competitor's buses. Rather than go through the legal and technical work each time it gets such a request, Proterra decided to open its patents, hoping a third party manufacturer will take on the role of making and customizing the fast charging equipment.

"We realized we shouldn’t use our fast charging technology as a barrier to entry, we should use it as a market enabler," Popple said.  "Some of those industrial players are better positioned to do this work" of custom designing to fit various manufacturers' buses.

Other incentives to spur the market

In June, the U.S. Department of Transportation and the Chinese Ministry of Transport launched the "Race to Zero Emissions" contest among cities to deploy as many zero emissions buses as possible. The aim is to lower carbon emissions in cities in China and the United States, the two largest carbon emitters.

In May, the California Air Resources Board announced it will award $23.6 million in grants for development and manufacturing of zero emissions trucks for serving ports. The sum should fund 43 zero emission big rigs to transport shipping containers. Boesel said four different teams of manufacturers were awarded grants to build the zero emissions big rigs. Once built, the trucks will be put into operation in disadvantaged communities near ports.

CALSTART said the four trucking companies are BYD, a team consisting of Peterbilt and California start-up TransPower,  Volvo which will be deploying a plug-in hybrid electric diesel truck under the Mack brand, and fourthly a team including Peterbilt, Kenworth, BAE Systems deploying a truck that uses a natural gas engine to recharge the batteries and provide the capability to operate in zero emission mode.

Then, another $16 million of funding from the California Climate Investment fund — the proceeds generated by California's greenhouse gas cap and trade program — will also go to the electric big rig program, for a total of $40 million.