As the prospect of catastrophic effects from climate change becomes increasingly likely, a search is on for innovative ways to reduce the risks. One potentially powerful and low-cost strategy is to recognize and protect natural carbon sinks — places and processes that store carbon, keeping it out of Earth’s atmosphere.

Forests and wetlands can capture and store large quantities of carbon. These ecosystems are included in climate change adaptation and mitigation strategies that 28 countries have pledged to adopt to fulfill the Paris Climate Agreement (PDF). So far, however, no such policy has been created to protect carbon storage in the ocean, which is Earth’s largest carbon sink and a central element of our planet’s climate cycle.

As a marine biologist, my research focuses on marine mammal behavior, ecology and conservation. Now I also am studying how climate change is affecting marine mammals — and how marine life could become part of the solution. 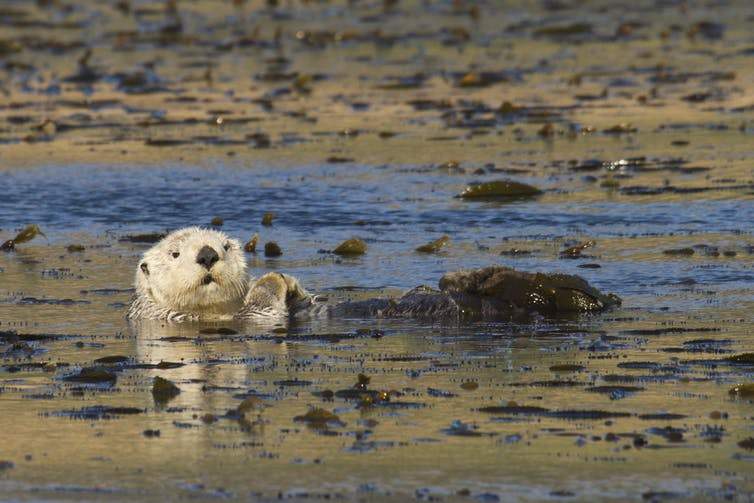 What is marine vertebrate carbon?

Marine animals can sequester carbon through a range of natural processes that include storing carbon in their bodies, excreting carbon-rich waste products that sink into the deep sea and fertilizing or protecting marine plants. In particular, scientists are beginning to recognize that vertebrates, such as fish, seabirds and marine mammals, have the potential to help lock away carbon from the atmosphere.

I am working with colleagues at UN Environment/GRID-Arendal, a United Nations Environment Program center in Norway, to identify mechanisms through which marine vertebrates’ natural biological processes may be able to help mitigate climate change. So far we have found at least nine examples.

One of my favorites is Trophic Cascade Carbon. Trophic cascades occur when change at the top of a food chain causes downstream changes to the rest of the chain. As an example, sea otters are top predators in the North Pacific, feeding on sea urchins. In turn, sea urchins eat kelp, a brown seaweed that grows on rocky reefs near shore. Importantly, kelp stores carbon. Increasing the number of sea otters reduces sea urchin populations, which allows kelp forests to grow (PDF) and trap more carbon. 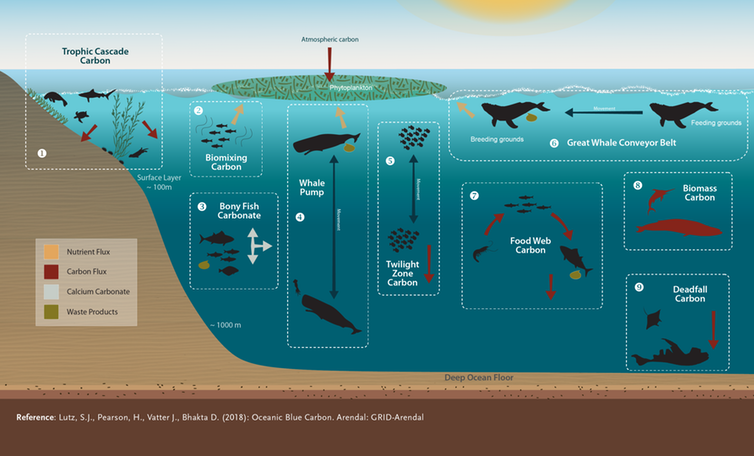 Carbon stored in living organisms is called Biomass Carbon, and is found in all marine vertebrates. Large animals such as whales, which may weigh up to 50 tons and live for over 200 years, can store large quantities of carbon for long periods of time.

When they die, their carcasses sink to the seafloor, bringing a lifetime of trapped carbon with them. This is called Deadfall Carbon. On the deep seafloor, it eventually can be buried in sediments and potentially locked away from the atmosphere for millions of years.

Whales also can help to trap carbon by stimulating production of tiny marine plants called phytoplankton, which use sunlight and carbon dioxide to make plant tissue just like plants on land. The whales feed at depth, then release buoyant, nutrient-rich fecal plumes while resting at the surface, which can fertilize phytoplankton in a process that marine scientists call the Whale Pump.

Whales also can help to trap carbon by stimulating production of tiny marine plants called phytoplankton, which use sunlight and carbon dioxide to make plant tissue just like plants on land.

And whales redistribute nutrients geographically, in a sequence we refer to as the Great Whale Conveyor Belt. They take in nutrients while feeding at high latitudes then release these nutrients while fasting on low-latitude breeding grounds, which are typically nutrient-poor. Influxes of nutrients from whale waste products such as urea can help to stimulate phytoplankton growth.

Finally, whales can bring nutrients to phytoplankton simply by swimming throughout the water column and mixing nutrients towards the surface, an effect researchers term Biomixing Carbon.

Fish poo also plays a role in trapping carbon. Some fish migrate up and down through the water column each day, swimming toward the surface to feed at night and descending to deeper waters by day. Here they release carbon-rich fecal pellets that can sink rapidly. This is called Twilight Zone Carbon.

These fish may descend to depths of 1,000 feet or more, and their fecal pellets can sink even farther. Twilight Zone Carbon potentially can be locked away for tens to hundreds of years because it takes a long time for water at these depths to recirculate back towards the surface.

"Marine snow" is made up of fecal pellets and other bits of organic material that sink into deep ocean waters, carrying large quantities of carbon into the depths.

To treat "blue carbon" associated with marine vertebrates as a carbon sink, scientists need to measure it. One of the first studies in this field, published in 2010, described the Whale Pump in the Southern Ocean, estimating that a historic pre-whaling population of 120,000 sperm whales could have trapped 2.2 million tons of carbon yearly through whale poo.

Another 2010 study calculated that the global pre-whaling population of about 2.5 million great whales would have exported nearly 210,000 tons of carbon per year to the deep sea through Deadfall Carbon. That’s equivalent to taking roughly 150,000 cars off the road each year. 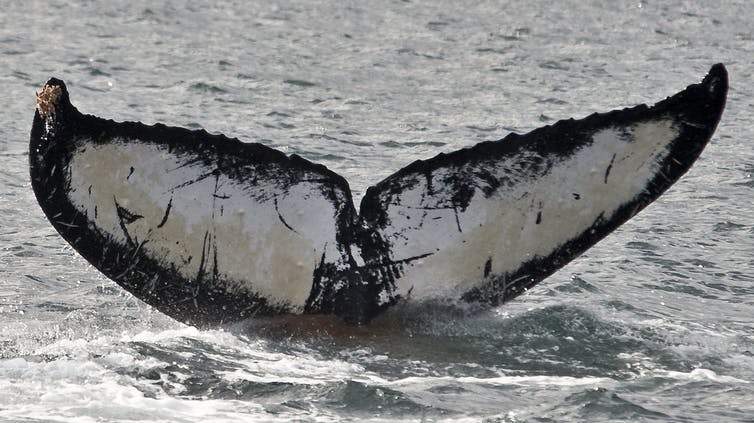 Heidi Pearson
The brownish water at the base of this humpback whale’s fluke is a fecal plume, which can fertilize phytoplankton near the surface. Photo taken under NMFS permit 10018-01.

A new basis for marine conservation

Many governments and organizations around the world are working to rebuild global fish stocks, prevent bycatch and illegal fishing, reduce pollution and establish marine protected areas. If we can recognize the value of marine vertebrate carbon, many of these policies could qualify as climate change mitigation strategies.

In a step in this direction, the International Whaling Commission passed two resolutions in 2018 that recognized whales’ value for carbon storage. As science advances in this field, protecting marine vertebrate carbon stocks ultimately might become part of national pledges to fulfill the Paris Agreement.

Marine vertebrates are valuable for many reasons, from maintaining healthy ecosystems to providing us with a sense of awe and wonder. Protecting them will help ensure that the ocean can continue to provide humans with food, oxygen, recreation and natural beauty, as well as carbon storage.

State of Green Business: The business of oceans catches a wave