This is an excerpt from "Small Actions, Big Difference: Leveraging Corporate Sustainability to Drive Business and Societal Value" by CB Bhattacharya, released Oct. 1. Reprinted here with permission from the author.

Passing on the lessons of sustainability

It was a drizzly and dreary morning in May 2015, and I was on the 8:44 a.m. Metro North train from Grand Central Station to Croton Falls, on the edge of New York City. I had been invited by sustainability champions Wayne Balta and Edan Dionne to spend the day with IBM executives at their Somers campus. It was in some ways an odd place to talk about sustainability and in others the most fitting. When IBM built the huge complex in the 1980s, Somers was described by the New York Times as "a rural town of 15,000 people," debating the social and environmental pros and cons of urban sprawl. At the end of my commute that morning, I stood amid four broad-shouldered, pyramid-topped office buildings and wondered whether any big corporation would tackle this kind of project today. To me, this low-rise intrusion was a measure of how corporate thinking had already changed — IBM moved out of Somers by 2017. 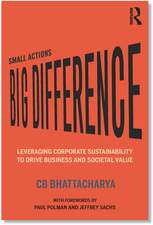 I learned a lot that day about what the company had done to embed sustainability in its folds. One striking example was how IBM persuaded the people involved in its $40 billion global supply chain to buy into its sustainability efforts. As one of IBM’s senior executives in supply chain management told me, the company had asked its suppliers to implement a social and environmental management system. It was meant to keep tabs on their environmental and social footprints, and meet eight sustainability-related requirements, including CO2 reduction, waste recycling and energy consumption targets. The suppliers were also required to publish results on an ongoing basis. Crucially, IBM didn’t prescribe targets for suppliers or how to meet them. It simply told its suppliers about the company’s direction and how far it wanted them to follow. "We wanted to use our name and purchasing power to take a leadership position in the industry and advance these social and environmental initiatives," the executive said.

However, for all the flexibility IBM built into its new supply chain requirements, the company also let its partners know one clear expectation: suppliers had 12 months to comply or lose the company’s business. As the executive put it, the company in effect told its suppliers: "This is the passage to being in the 21st century. If you’re not a strong player in this arena, being responsive to addressing concerns such as human trafficking, conflict minerals and various environmental issues, you will be nudged out." It was a bold move designed to foster change in and well beyond the lush green campus in Somers, New York.

Some of IBM’s suppliers resisted at first. The executive recalled the familiar refrain, "We don’t have time for this." To help suppliers comply, he continued, IBM led by example and showed them that IBM was "doing everything" it had also asked its suppliers to do. IBM made sure that its own procurement employees could assist suppliers — for example, by helping them to implement the kind of management systems IBM was demanding, or to consider material sustainability issues to ensure supply chain security. For this latter task, IBM’s internal procurement team had to learn about the company’s sustainability priorities before reaching out to train suppliers. I learned that top-down messages can be extremely effective at IBM: "If the top guy says it, then everybody agrees," the executive said. In this instance, John Paterson, IBM’s chief procurement officer at the time, had cascaded messages through the organization. The New York Times had even published an article on the company’s new social and environmental requirements for its suppliers.

If you’re not a strong player in this arena, being responsive to addressing concerns such as human trafficking, conflict minerals and various environmental issues, you will be nudged out.

The story of how one part of IBM made sustainability part of every employee’s job and supplier’s mission is extremely illuminating. It takes educating people, re-educating them if need be, preparing an extensive list of "FAQs" and making sure that the executive message is consistent and passed down through the ranks. As the executive said,

The fact that we’ve been into this for five years [shows] this is not going away. There’s a degree of tenacity that’s just part of a management ethos that we’ve instilled. I would say that we’re winning converts. Step by step by step.

One reason for this was that suppliers constantly received applause and reinforcement for their efforts, he went on: "You’re not just doing it for IBM you’re doing it for yourself. You’re making yourself a much more attractive supplier to clients." Creative license to find their own solutions — and recognition for finding them — had motivated IBM procurement staff and suppliers to take ownership of sustainability.

There are no hard-and-fast rules to ensure success. But at every successful company I studied, leaders implemented some mixture of new training methods, management systems, and cultural facets to pursue their sustainability goals. They knew how to balance centralized control with empowering local managers and stakeholders who know their part of the business better than anyone else. At the vast majority of unsuccessful companies, by contrast, leaders don’t know how to do this. As a result, even relatively enlightened companies fail to deliver on leaders’ lofty rhetoric. No wonder that a 2012 study of employees of large companies found that almost 60 percent of respondents perceived "a gap between what my company says […] and how we actually behave." This chapter shows readers how to go beyond the rhetoric and make sustainability a part of every employee’s daily experience on the job — a prerequisite for the ownership of sustainability.

By making concrete changes, even in the far-flung reaches of a company, leaders can galvanize large numbers of stakeholders to take ownership of sustainability and make a difference.

Procurement is just one of several operational areas this chapter examines in relation to sustainable business models. I argue that marketing departments need to promote the environmental and social benefits of products alongside their functional strengths — no one does this better than Unilever with its "purpose" brands. Research and development departments need to follow the lead of the likes of BASF and Nestlé and use eco-efficiency tests and life-cycle analysis to determine how sustainable a new product will be. Assessing a product’s environmental and social impact — alongside its quality and cost — should be mandatory steps before executives make final decisions about production. Lastly, finance departments also have vital roles in driving sustainability, especially through the dialogue they maintain with investors. SAP has started to publish financial, environmental and social reporting data in one document, popularly called an integrated report. It’s an example that shows companies need to empower and train their investor relations departments to help investors think anew.

This chapter will look at systems, structures and training that make it relatively easy to implement sustainability for every employee of a company, be it a huge corporation or the smallest shop. I describe ways to empower and enable stakeholders by giving them the confidence and the freedom to start thinking and acting sustainably by themselves. And I look at methods and tools that lower the cost of acting sustainably and can help you make sustainability every employee’s day job, regardless of whether they’re in human resources, marketing or research and development.

By making concrete changes, even in the far-flung reaches of a company, leaders can galvanize large numbers of stakeholders to take ownership of sustainability and make a difference — making real and mounting contributions — through their own daily work. If you get the implementation right, most people you work with will assume ownership of sustainability and see business through the sustainability lens, every day, in every department. At one of Unilever’s tea bag factories in the United Kingdom, for example, a mere 3-millimeter adjustment to the size of a seal on the bags saved 15 huge reels of paper every shift. Over time, that one change saved thousands of trees and significantly reduced costs. What might your company save — both financially and environmentally — if everyone at all of your facilities was striving to introduce innovations like this?

Katz Graduate School of Business and College of Business Administration, University of Pittsburgh

How She Leads: Beth Colleton, NBC

Inside Out: Sustainability Communication Begins in the Workplace

What GRI Learned in Its First Year in America